The raids could discourage future complaints of worker abuse. 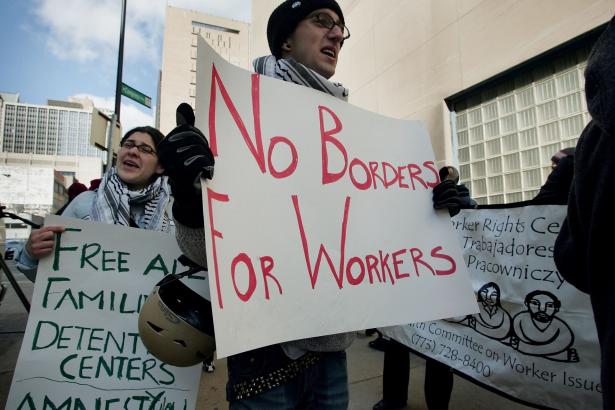 According to the suit brought by the Equal Employment Opportunity Commission (EEOC), supervisors, “touched and/or made sexually suggestive comments to female Hispanic employees, hit Hispanic employees, and charged many of them money for normal everyday work activities.” Many workers were reportedly either discharged or subjected to other forms of retaliation when they complained.

As part of the settlement, Koch Foods not only paid out a massive sum to the victims, but also agreed to implement training for employees and set up a 24-hour hotline for reporting discrimination complaints in both English and Spanish. The settlement lasted three years, which means Koch Foods is still under supervision to continue efforts to reduce discrimination in its work place.

As labor reporter Mike Elk notes at Payday Report, it may not be a coincidence that the Morton plant was raided. There have been at least two other plants, one in Salem, Ohio, and another in Morristown, Tennessee, where ICE raids have followed complaints of worker conditions. Last year, for example, the Occupational Safety and Health Administration (OSHA) fined Fresh Mark over $200,000 for three separate incidents in which proper safety guards were not in place in its Salem meatpacking plant. A week later, it was raided by ICE.

The United Food and Commercial Workers union (UFCW), which represents many of these plant workers, is concerned these ICE raids will discourage workers from reporting abuse or unsafe conditions. This means employers like Koch Foods can rely on the fear of raids to help them exploit migrant laborers already working in dangerous facilities without accountability for their other illicit labor conditions.

Wednesday’s raid was one of the biggest ICE raids in over a decade. It took place on the first day of school in Morton, meaning many children whose parents were detained had no family to go home to at the end of the day.