We Need to be Once Again United for Peace and Justice

There has been a sea change in the last few weeks, a deepening of the crisis of racial and cultural division in this country, instigated by the President of the United States. 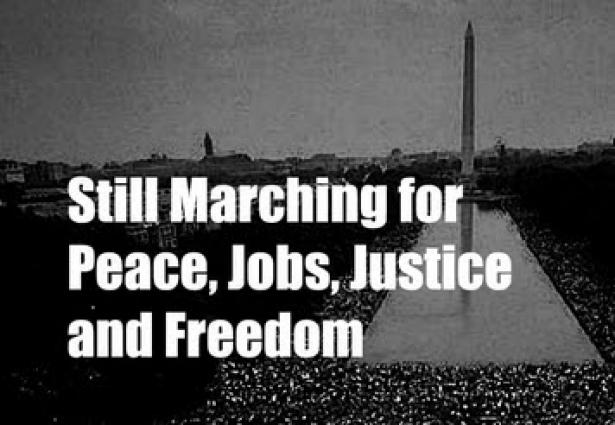 , United for Peace and Justice

It began with his attacks on four women of color, all members of the United States Congress. It spiraled catastrophically with the mass murder in El Paso, carried out by a young white nationalist whose words echoed Trump’s own.

United for Peace and Justice was founded in the wake of the September 11, 2001 attacks. Faced with a traumatized public and an administration eager for war, our goal was to promote peaceful, democratic alternatives, and collective, international engagement to seek justice, not revenge. We recognized from the outset that an essential part of this work must be to support and protect the communities targeted by war propaganda and anti-Muslim hysteria.

The politics and culture of this country never have recovered from the ground lost on that day and in the long wars that followed. Almost two decades later, we are still at war, and new wars seem always just over the horizon. The currents of racism and white nationalism, born of the traumas of genocide of native Americans and Atlantic slavery that are as much a part of this country’s founding as the Constitution and the Declaration of Independence, never have been far below the surface. The fear, despair and resentment flowing from the second shock of a generational economic crisis and a government response that bailed out the rich and largely ignored the rest provided more fuel for demagogues willing to exploit those currents. Trump’s ascendance is the high-water mark of a politics of diversion and division, less an aberration than a demonstration of the power of those tactics and of the factions who have chosen to use them.

When called to account publicly for racism, Trump and his enablers often will shift ideological gears, denouncing the same political adversaries as “socialists.” We must remember that this tactic has a long dark history, extending back beyond similar attacks on the U.S. civil rights movement to Nazi portrayals of Jews as communists. This kind of propaganda shares pernicious characteristics with racism and other bigotry. Its purpose is not to engage in debate about the merits of socialism, but to cast an opponent’s beliefs as foreign, alien, and forever irreconcilable with membership in the nation.

So now we are faced with a moment of choice. It is clearer than ever that human emancipation, the constitution of a society by free human beings with all having an equal voice in shaping our shared future, is not compatible with a concept of the nation that premises membership on race, religion, gender, or any such markers of identity. You can have blood and soil politics or democracy, authoritarian nationalism or the Constitution and a rule of law that is something more than force in fancy dress. You can’t have both.

Some of the dangers posed by a President who incites hatred against people on the basis of their race or religion are obvious. The political figures Trump singles out are deluged with death threats. Violent acts that would be called terrorism if done in the name of any cause other than white nationalism already were on the rise before El Paso. But there are other pervasive and pernicious effects. The climate of violence and the legitimation of extreme authoritarian nationalist politics not only frightens but silences. This may be so particularly in parts of the country where targeted communities are smaller portions of the population.

Resisting the slide towards authoritarian nationalism will require a movement that is broad and deep. And like all such efforts it must begin at the bottom, in our communities and schools and workplaces. The first step of a movement is finding its voice, and in today’s climate this means doing all we can to make those targeted by hate feel safe, and free to step forward.

We know that many of you already are coming out to defend targeted communities.  But even though we may have other issues that are the main focus of our day to day work, we believe that we have come to a moment in which defending the most vulnerable among us is of central importance. There can be no real progress on climate change, or health care for all, or ending and preventing wars, or the abolition of nuclear weapons without progress towards democracy and justice.