When Cities Turn to Uber, Instead of Buses and Trains

The pitfalls of renting a ridesharing-based transit system instead of paying the mortgage on lasting public-infrastructure investment are already becoming clear. 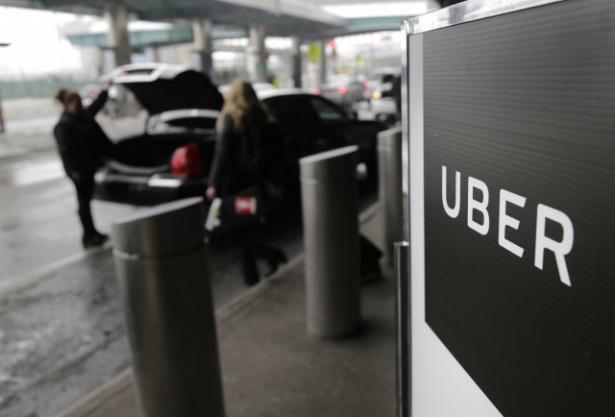 A sign marks a pick-up point for the Uber car service at LaGuardia Airport in New York, Seth Wenig/AP Photo

It’s long been understood that ridesharing apps like Uber and Lyft may pose a threat to public transit. Despite those companies’ claim that they’re complementary to buses and trains, research has shown repeatedly that ridesharing does indeed siphon riders from municipal transportation. One such study from the University of Kentucky illustrates this dynamic starkly: For every year after ride-hailing companies enter an urban market, rail ridership falls by 1.3 percent, and bus ridership by 1.7 percent. Thirty-one of 35 major metropolitan areas in the United States lost public-transit passengers in 2017.

Now, with many regional transit systems reeling and with Uber under the gun to increase revenues, the relationship between the transit systems and the apps is taking on new forms. Ridesharing apps are no longer just competing with public transit for customers, but assuming some operations of public-transit systems outright. With public-transit authorities losing revenue and looking to save money, a number are offloading some of their work to the apps. Uber has struck some 20 deals with public-transit providers in cities in the United States, Australia, and Canada; Lyft has secured 50 transit deals of its own.

These arrangements vary widely. In some cities (Denver, for one) the apps serve as ticketing agents—within its interface, Uber sells tickets to the Regional Transportation District alongside its regular rides, providing an Amazon-like marketplace. In others, the companies have offered free rides to transit stations. Cities have debated whether or not they should subsidize “last-mile” trips themselves, where ridesharing companies would receive public funding to help defray the costs for commuters of getting to nearby transit stations. But the efficacy of such programs has been questioned: A 2016 study by the Center for American Progress, focused specifically on Atlanta, found that such a program would have very limited impact, especially for low-income residents. Even with heavily subsidized rides costing just $3 per trip, the annual additional cost of $2,150 per commuter would be higher than the $2,000 an average low-income household would spend to maintain a personal vehicle.

Nonetheless, some cities have begun contracting out their public-transport services to these companies more extensively. Dallas Area Rapid Transit (DART) now subsidizes shared Uber rides within a certain radius of its transit stations, in the hope that more commuters will ride with them. And in Innisfil, Ontario, a rapidly growing exurb of Toronto, the town contracted with Uber to run its entire public bus system, subsidizing rides in lieu of investing in bus lines, which it decided would cost much less per ride to establish. Riders in Innisfil would pay just $3 to $5 per ride to a number of predetermined community hubs in the back seat of an Uber, while the town would put up the rest of the fare. (Trips to other destinations would be subsidized by $5.) Other municipalities have decided it’s cheaper to pay ridesharing companies to furnish transit options than to build them out themselves.

As Uber and Lyft struggle to prove their fiscal viability, it’s no surprise that they’ve turned to public contracts to help pad their bottom line. But their formal encroachment into the public-transit sector brings with it a number of questions and concerns about the true cost of these cities’ cost-saving measures, and the future viability of their systems. City officials with limited budgets for public services may think they’re being shrewd, but the uncertain financials complicate that notion. “Uber is saying don’t invest because I can provide service for way cheaper,” says Beth Osborne, director of Transportation for America. “But what they mean is cheaper only as long as venture capital is plugging the hole.”

Last week, Uber posted a $5.2 billion quarterly loss alongside slower-than-ever growth, a startling figure for a company already accustomed to losing around $1 billion a quarter. Lyft posted a $644 million quarterly loss of its own. Ahead of those reports, both companies announced they would be ratcheting up prices. “There is deep uncertainty around pricing,” says Adie Tomer, a fellow at the Brookings Institution Metropolitan Policy Program. “What happens when you build out a public-facing shared service treating Uber and Lyft like a transit agency, and they go under? They don’t have the fiscal resiliency of a public-transit agency. No one is going to bail out Uber and Lyft.”

That financial uncertainty is almost certain to get worse. With a number of legal challenges to the labor practices of gig-economy firms, the cost of labor is almost certain to increase. California’s AB-5, a bill passed by the state’s Assembly and now pending in its Senate, would reclassify gig-economy workers as employees, completely upending the companies’ current model. And with the technology of autonomous vehicles still seemingly far off, there’s no innovation-based workaround to tamp down labor costs.

In fact, the notion that municipal transit could be economically furnished by private, for-profit firms may be fundamentally flawed. “Nobody in the history of transport has made a lot of money moving people. Moving people is a very difficult task to make profitable,” notes Osborne. The one exception to that rule is airlines, which “only turn a profit because taxpayers pay for the airports, the runways, and the air traffic control.”

The pitfalls of renting a ridesharing-based transit system instead of paying the mortgage on lasting public-infrastructure investment are already becoming clear. In Inisfill, the costs of their Uber-run system quickly proved to be greater than expected. In April, officials raised prices for riders, and instituted a monthly ride limit. The city’s subsidy for the program grew from $150,000 in 2017 to $900,000 by 2019. With Uber’s prices rising, that figure will likely continue to climb as well.

If both ridesharing and public-transit agencies are money-losers, it’s worth considering the outcomes each system delivers. Uber and Lyft have resulted in meaningful increases in air pollution and congestion, while remaining unaffordable for many commuters. Without Uber and Lyft, one study showed traffic in San Francisco and kindred cities would decline 13 percent. And Uber’s prodigious $5 billion loss doesn’t even account for the other public subsidies that ridesharing companies enjoy in the form of road maintenance, traffic services, and more.

If ridesharing companies are unable to deliver on the profitability side as well as the policy-outcome side, perhaps public-transit systems should be given a wider budgetary berth. “Imagine if we had subsidized our transit agencies [by] an extra $5 billion a quarter,” says Osborne. “What they could have built? How much more broad-based would the benefit have been if they had been allowed to lose that kind of money?”