film How The Hunt Became a Political Rorschach Test

After a series of tweets from President Trump, Universal canceled the release of a film that’s been alternately praised and decried by critics who haven’t seen it. 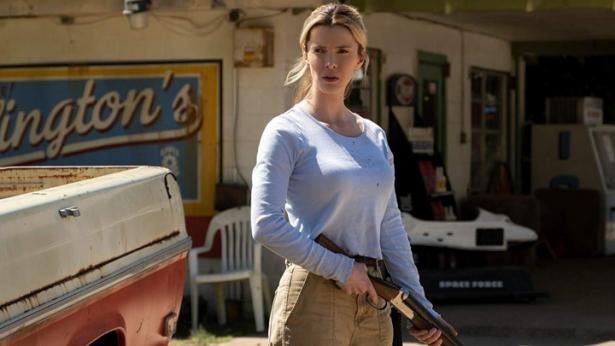 Universal’s decision to cancel the release of its upcoming thriller The Hunt was a necessary and sober move taken after the recent mass shootings in Dayton, Ohio, and El Paso, Texas—at least, that’s according to an op-ed in Variety. National Review saw it differently, blaming a misreading of the film by President Donald Trump for the cancellation of a movie that definitely shares his politics. The president’s take? “Liberal Hollywood is Racist at the highest level, and with great Anger and Hate!” he tweeted, referring to a “movie” that was “made in order to inflame and cause chaos.”

Though Trump never specifically named The Hunt, the Craig Zobel–directed Blumhouse production had already sparked controversy. An early teaser presented itself as a fake advertisement for a resort called “The Manor” that allowed the rich to hunt other humans. A later trailer clarified the narrative: A group of wealthy “globalists” kidnap people from all over America and are surprised when one woman, Crystal (played by Betty Gilpin), begins to fight back and turn the tables on the villain behind the scheme (Hilary Swank). The debate about the intentions behind such a movie quickly turned into something of a Rorschach test, with some people perceiving the story as a satire and others as a tale of pure hatred; the price, for now, is that nobody will end up watching the final product.

The door isn’t closed on The Hunt eventually ending up in theaters or online. In its statement on the decision, Universal said only that the movie’s September 27 release date had been canceled. “We stand by our filmmakers and will continue to distribute films in partnership with bold and visionary creators, like those associated with this satirical social thriller, but we understand that now is not the right time to release this film,” a spokesperson for the studio said on Saturday.

A week prior, Universal had suspended advertising for The Hunt, which features plenty of gun violence, because of the Dayton and El Paso shootings. The Hollywood Reporter said the studio was worried that the film, originally titled Red State vs. Blue State, would appear exploitative, even though it was intended as a satire. The article featured excerpts from the film’s screenplay, in which the movie’s on-the-run heroes are reportedly called “deplorables” and are being targeted for expressing anti-abortion beliefs or for using racial slurs on Twitter.

Perhaps Universal executives suddenly felt uneasy about the premise, which is essentially an update of 1932’s The Most Dangerous Game, but then it’s hard to understand why they would have green-lighted the project in the first place. Even those brief script excerpts that appeared on THR suggest the film is an arch, in-your-face comic thriller, along the lines of other Blumhouse projects, such as The Purge. Mixing extreme, broad political humor with gore has been a mainstay of horror for decades.

The creative team behind The Hunt has made plenty of twisty genre films with topical or satirical edges. Zobel was one of the creators of the famed web cartoon Homestar Runner, while the writers Damon Lindelof and Nick Cuse worked on the heady apocalyptic series The Leftovers together. Lindelof is the co-creator of Lost and has written many big Hollywood scripts; he’s also an avowed liberal who says that his upcoming HBO adaptation of Watchmen is about confronting white supremacy in America.

It’s difficult to believe that this creative team would be interested in making a film with overt right-wing politics, though National Review’s Kyle Smith disagreed, writing, “For once, a genre movie was built around an anti-progressive premise.” But there’s nothing in the advertising directly suggesting that. The antagonists of the film are presented only as elitists, a group often vilified on both sides of the aisle. Variety’s Owen Gleiberman had a completely different takeaway, insisting that the film had to be kept from theaters simply to avoid tipping the scales of the gun debate: “For the first time in maybe forever, the right seems not just on the defensive about this issue. The right seems on the run.”

If The Hunt is released, it may not live up to any of the lofty ideas being projected onto it; after all, it’s being advertised primarily as a hard-core action thriller. But if its release was canceled only because of the very real gun violence plaguing America, why isn’t a movie like Angel Has Fallen, distributed by Lionsgate and overflowing with brutality, also being pulled? That film is the third in a series that has been criticized in the past for its crass, button-pushing politics, for portraying Korean and Pakistani terrorists as one-dimensional psychopaths for its hero (Gerard Butler) to destroy. The movie will be in theaters on August 23. Two days earlier comes Fox Searchlight’s Ready or Not, a horror film about—wait for it—a rich family hunting another person.

Art, and that includes B movies, can sometimes be productively challenging; other times, it can just be unfulfilling, politically off the mark, or offensive. But those are judgments that theatergoers should be able to make for themselves; instead, we’ve reached a point where the president can influence the release schedule of a major studio with just a series of tweets. Perhaps viewers will eventually get a fuller picture of what The Hunt’s creative team was trying to accomplish. Until then, all we can do is pick apart angry tweets, measly bits of marketing, and secondhand snippets of the script, which hardly bodes well for the state of discourse in the country.

DAVID SIMS is a staff writer at The Atlantic, where he covers culture.