What Republicans Really Mean When They Call Jews Disloyal

Prominent, non-Jewish Republicans now feel free to censure American Jews for being insufficiently supportive of another country. They’ve divided us into camps of good Jews and bad Jews. So … what happens to the bad ones? 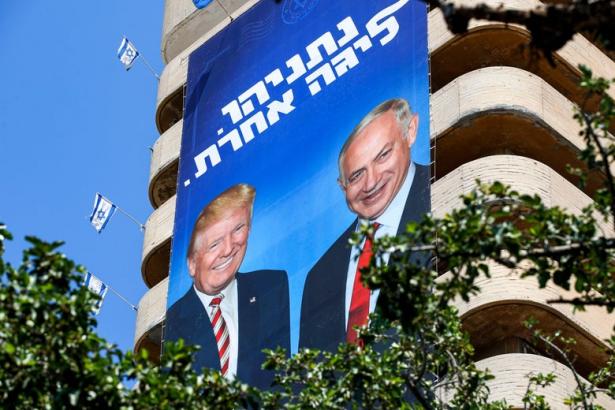 Speaking before a group of Jewish Republicans in April, the president referred to Benjamin Netanyahu as “your prime minister.”, Jack Guez/Getty Images

That is the viewpoint Donald Trump decided to lay out this week. On Tuesday, while talking to reporters about Israel’s decision to bar two Muslim American congresswomen, Reps. Rashida Tlaib and Ilhan Omar, he said: “I can’t believe we’re even having this conversation. Where has the Democratic Party gone? Where have they gone where they are defending these two people over the state of Israel? I think any Jewish people that vote for a Democrat, I think it shows either a total lack of knowledge or great disloyalty.”

At first, there was a bit of confusion over whether Trump was accusing Jewish Democrats of disloyalty to Israel or the United States. On Wednesday, he clarified. “If you vote for a Democrat, you’re being disloyal to Jewish people and you’re being very disloyal to Israel,” Trump said. (About 70 percent of Jews broke for Hillary Clinton in 2016.)

This is not the first time Trump voiced such sentiments, though in the past he hasn’t been quite so explicit. Speaking before a group of Jewish Republicans in April, the president referred to Benjamin Netanyahu, the leader of Israel, as “your prime minister,” as if he were talking to a room full of foreigners. Nor is Trump the first right-winger to suggest that Jewish Democrats are somehow selling out their kin. The conservative writer and vlogger Ben Shapiro once memorably tweeted that, “The Jewish People has always been plagued by Bad Jews, who undermine it from within. In America, those Bad Jews largely vote Democrat.” Iowa congressman Steve King told an interviewer a few years back that he didn’t “understand how Jews in America can be Democrats first and Jewish second. ” And in the wake of the president’s comments on Tuesday, a number of supporters rushed to back him up, from his friend and lawyer Rudy Giuliani, who seemed to think that the disloyalty charge was OK because Trump was talking about Israel, to popular conspiracy theorist Wayne Allyn Root and troubled pastor Greg Locke.*

Trump’s statement on Jewish disloyalty is EXACTLY CORRECT. The Democrats hate Israel and hope for its demise. Guess what?? GOD PROMISES THAT ISRAEL WILL ALWAYS BE VICTORIOUS.

You may recall that in March, Omar landed in a raging controversy after she was caught on tape saying that Israel’s backers were demanding “allegiance” to a foreign country. In response, conservatives and some liberals accused her of peddling what’s known as the “dual loyalty smear”—the old trope that says Jews can’t be trusted because of their treacherous foreign loyalties.

Many, myself included, thought the outrage was unfair. And in light of recent events, some progressives have now accused Trump and the Republicans of perpetuating the real dual loyalty smear. But in some sense, that’s not quite right either. Conservatives have actually inverted the old libel. Instead of accusing Jews of being overly loyal to a foreign nation, Trump has turned centuries of anti-Semitism on its head by accusing them of not being loyal enough to one—and his followers are happy to echo the charge.

How has this come to pass?

One obvious part of the answer is that Trump and other conservatives are just parroting the sorts of things they hear from Jewish Republicans, who—let’s be blunt—tend to see Israel’s Jewish critics as a bunch of self-hating secularists who’ve bought in to leftist anti-Semitism. Not all of them are quite as forthright about their feelings as Shapiro, who charmingly likes to dismiss his opponents as “Jews In Name Only.” But the sentiment that liberal Jews are bad Jews is real. And Republicans outside the tribe have clearly picked up on it.

Get The Angle, Slate’s sharpest takes, curated and distilled by Slate’s copy desk, delivered to your inbox every day.

But pro-Zionist and anti-Zionist Jews have been lobbing accusations of self-hatred and abetting anti-Semitism at one another quite literally since Zionism was born. It’s an old story. What we’re seeing now is also the result of a recent shift in America’s political alignment. While there have almost always been critics of Israel on the left, there used to be a rock solid bipartisan consensus on the Jewish state among mainstream Washington politicians, so that accusing Jewish Democrats of “disloyalty” for merely voting for Democrats wouldn’t have made a drop of sense. (Those 71 percent of Jews who voted for Hillary were voting for a very pro-Israel candidate.) But in recent years, that consensus has begun to crack, in part because of tensions between Netanyahu and the Obama administration that turned supporting Bibi, at the very least, into a more partisan issue. Plenty of Democrats, like Senate Minority Leader Chuck Schumer, are still old-line liberal Zionists. But outside of its top leadership in Congress, the party and its voters as a whole have become less unconditionally supportive of Israel, and more tolerant of radically critical voices like Omar and Tlaib.

Republicans, on the other hand, have become monomaniacally obsessed with Israel and its security. To many conservatives today, the Jewish state is not just an important ally—it is our most important ally. National defense hawks, rightly or wrongly, see it as our bulwark against Iranian aggression in the Middle East. Islamophobes see it as part of a struggle over civilization itself. And an entire generation of evangelical Christian Zionists—like Locke—believe that Israel is part of a divine plan, God’s instrument on earth. And to almost all of them, supporting Israel in practice means supporting Netanyahu’s conservative Likud government. The devotion is so strong that in a 2015 Bloomberg poll, 67 percent percent of Republicans said they believed that “Israel is an important ally, the only democracy in the region, and we should support it even if our interests diverge.” Nobody would say that last part about, like, Great Britain.

When you mix in Trump’s personal affinity for the Jewish state—Israel literally named a settlement after him—you reach the absurd yet logical conclusion of contemporary U.S.-Israel politics: Prominent, non-Jewish Republicans now feel free to censure American Jews for being insufficiently supportive of another country. They’ve divided us into camps of good Jews and bad Jews. So … what happens to the bad ones?

That’s what makes this whole thing so worrisome. It’s not that Trump and his buddies are reviving the old dual loyalty smear, exactly. It’s not simply that they are treating Jews as an other, whose politics can only be judged in relation to a foreign nation and who are not reallycompletely American (though that’s worrisome too). It’s frightening because when conservatives say that Jews who vote for Democrats are disloyal to Israel, they are implying that they are disloyal to their own ethnic interests, American interests, and even the almighty’s. It’s the 2019 version of calling liberal Jews a bunch of heretics. And we all know what happens to heretics in the end.