Trump: Just the Most Recent Colonizer To Turn His Eyes to Greenland

The danger of the buy Greenland scheme is obscured by Trump’s role, and it’s disappointing how reporters and pundits fell into the rhythm of analyzing Trump’s folly through the same lens that led to the devastation of this land’s Native nations. 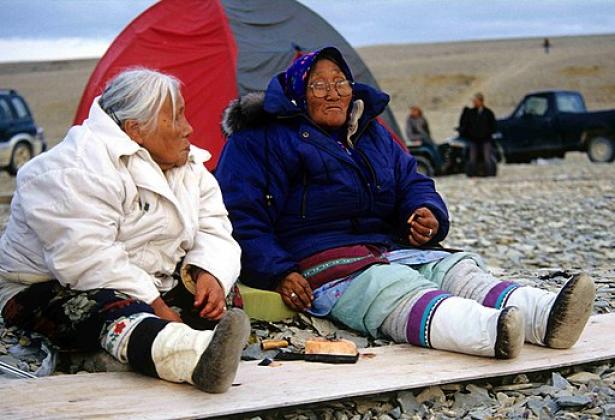 Thursday afternoon, a curious item appeared in the pages of The Wall Street Journal. President Donald Trump, either as a joke or entirely seriously, is apparently weighing the prospect of the United States federal government purchasing Greenland.

This specific move is not unprecedented. Harry Truman waved $100 million in front of Denmark in 1946, and the State Department opened (and then closed) an inquiry into buying Greenland and Iceland in 1867. Be it Greenland or another part of the globe, the concept is, quite obviously, not a new one for the United States, or any major colonizing power; as a matter of fact, ‘buying,’ occupying, and poisoning land that does not truly belong to them is, historically, kind of their thing.

For its part, the Greenland government was understandably curt in its response.

Because Mr. Art Of The Deal is the one floating at the center of this massively inane proposal, there is a bit of innate humor baked into the story. But taking a step back from the specific issue at hand, a discussion of the growing global presence of the U.S. is warranted. It’s not a new conversation; the argument that the government should not continually commandeer every speck of dirt in the name of capital has essentially existed since the nation’s birth. True, expansionism has won just about every time, but there is still room to fight.

Despite the joyous stupidity, Trump’s leering glances toward Greenland made clear in less than 24 hours why America and the rest of the globe’s major powers continue to be postcolonial in name only. Where the leading topic should be the protection of Indigenous populations and the crucial natural communities they serve and sustain, there is instead talk of square footage, potential monetary gain, and opportune militaristic strategy.

Now, those waiting for President Trump to be interested in Indigenous issues are likely also waiting for free cheeseburgers to fall from the sky. This is, after all, the man who tapped the oil crony to run the Department of the Interior, who insulted Diné (Navajo) World War II code-talkers, and whose sole connection with the Indigenous people is using a godawful Disney movie as a political insult. The bar of expectations was placed on the ground, and then a hole was dug to bury it deeper.

But it is worth examining how the rest of American society, and specifically the American media, handles cases such as these. The short answer is that the conversation goes the exact same way as it goes in Trump’s rattling mind.

The way the idea was discussed by the Journal, and subsequently by The Washington Post and The Guardian, among others, was more akin to a SportsCenter update on the latest, flashy free-agent signing than it was a casually floated invasion. Take this offering, from the Post, and keep in mind that this is not a colored swatch on a board game to be populated with plastic soldiers or houses, but a natural habitat that has been home to the Inuit people for more than 700 years:

According to the CIA’s World Factbook, Greenland is 2.2 million square kilometers, with 1.7 million of that covered in ice. It has considerable natural resources, such as coal and uranium, but only 0.6 percent of the land is used for agriculture. It has about 58,000 residents, making it one of the world’s smallest countries by population.

The irony here, of course, is that Greenland is already a colonized territory. The Danish government shouldered Norway out of joint ownership in 1814, and officially laid claim to it when it ratified its constitution in 1953. In the past decade, the people who actually call Greenland home have steadily fought for self-governance and self-determination and have been able to slowly pry the Danish grip back, one finger at a time. In 2008, the population voted in favor of the Self-Government Act, which slowly granted Greenlanders wide-ranging autonomy from the Danish government, even if, technically, the Danish still claim the land as their own

As always, deeply intertwined with the concern of encroaching on Indigenous peoples is the concern of environmental impact, specifically as it relates to climate change. Given that much of that autonomy is tied up in the economic boon of both natural resource extraction and clean energy production, the interest in Greenland by the U.S. is almost too transparently vile: As the arctic shelf recedes and the ice disappears, the major powers—backed by every major oil and gas executive—will seek to extract every ounce of liquid money that sits underneath the soil. Eventually, the well will be tapped and any faux goodwill the companies and the governments extended to the Indigenous people will disappear, along with the fleeting hope for a thriving existence.

This issue was at the forefront of the United Nations’ special report on Climate Change and Land, released ten days ago. While focused on areas in Africa, the study was done in coordination with the Indigenous populations (a.k.a. the people who will actually be first and most dramatically affected by the encroaching emergency). In doing so, the report laid out how the multi-pronged counterattack to climate change must be led by the major powers and energy companies, but also highlighted how crucial it is to encourage land management by Indigenous populations. Those people understand the land they live on not as an opportunity to stuff their pockets, but as a place to protect and preserve so that future generations can continue to share that same land.

Yes, the enormity and danger of this proposal are obfuscated by the involvement of Trump. But it’s disappointing how quickly journalists and pundits snapped into the rhythm of analyzing the president’s folly through the same lens that led to the destruction of this land’s Native nations and the places they try to protect.

Disappointing, but not surprising.

[Nick Martin is a staff writer at The New Republic. @nicka_martin.]