Statement from the AHA on Domestic Terrorism, Bigotry, and History

As the largest organization of professional historians in the world, the AHA condemns the recent deployment of histories invented in the interest of bigotry, violence, and division. 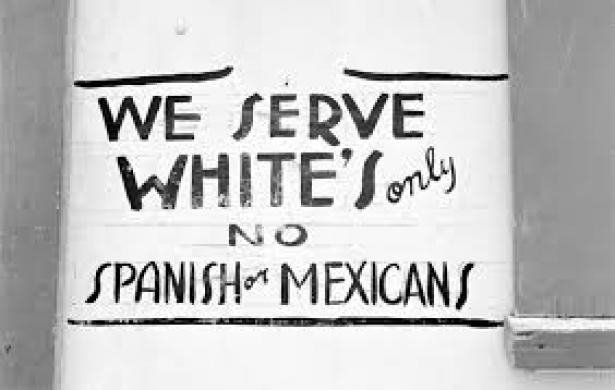 Signs like the one in this undated image were displayed at various restaurants and other pubic accommodations under a system known as "Juan Crow" laws., Russell Lee / Dolph Briscoe Center for American History

Shortly after the November 2016 presidential election, the American Historical Association noted with dismay the “continuing evidence of polarization to the point of harassment seldom seen in recent American history. Historians can say with confidence that this is not our nation’s finest hour. Language previously relegated to the margins has moved out of the shadows, emboldening elements of American society less interested in a more perfect union than in division and derision.”

That was the first time the AHA had issued a statement in response to an election. We were well aware of the dangers of seeming to be entering a political realm, venturing beyond our mission of promoting historical work, historical thinking, and the professional interests of historians. But we were equally aware of the responsibility we bear as part of the institutional matrix of civil society. As teachers, researchers, and citizens, historians bring to civic culture the values of “mutual respect, reasoned discourse, and appreciation for humanity in its full variety” that we emphasized in our 2016 statement. As historians, we recognized the dangers on the horizon, given what we have learned and taught about the histories of bigotry and its implications in the United States and elsewhere in the world.

And now, in the wake of mass homicide in Pittsburgh, El Paso, and elsewhere, our fears are being realized. These events rest on a long history of racist and xenophobic domestic terrorism, evident when taking a historical perspective but too seldom recognized in public discourse. Too few Americans, for example, frame the Ku Klux Klan within the context of a history of racially oriented terrorism that must be named and contextualized if we are to learn from the past and do better in the future.

The lack of public awareness of domestic terrorism’s place in American history stands in stark contrast to frequent contemporary references to immigration and immigration policy. The United States has traditionally prided itself on being “a nation of immigrants.” This phrase is aspirational, but the historical reality is more complicated. Other than relatively recent immigrants, African Americans’ ancestors were brought here by force, and enslaved for generations. For many other people, the United States has been a land of hope and opportunity. Millions have come to our shores since the 16th century, some of them fleeing poverty and oppression, others displaced by war or economic collapse. Some intended to stay, some wanted only to earn enough to return to their home countries with added resources. Their struggles for respect and inclusion, although often marked by hostility and bigotry, have expanded and democratized our country’s definition of what it means to be American.

Increasingly in recent years, policy makers, political commentators, and even terrorists themselves have been drawing on and twisting history to oppose the expansive democracy immigration has helped to build. Many of them adopt the dark vision of early 20th-century exclusionist politics, which insisted that some people could never be real Americans. Some of them create a mythic “white” past rooted in a misreading of medieval Europe. And to one extent or another, many replace the nation’s complex experience of migration with dangerous talk of “invasion,” language that led directly to the El Paso assault and the deaths of 22 people. The rhetoric also elides the history of North America’s indigenous people, who are the only residents who can legitimately claim to have been “invaded.”

As the largest organization of professional historians in the world, the AHA condemns the recent deployment of histories invented in the interest of bigotry, violence, and division. Many critics of white nationalism have admirably insisted that “this is not who we are.” If the statements of white nationalists do not reflect who Americans are or want to be, they do compose an undeniable part of our collective past. Those aspects of the nation’s heritage should be exposed and overcome, rather than ignored or celebrated. Knowledge of history can help Americans achieve that goal.

The following societies have endorsed our statement on domestic terrorism, bigotry, and history: