There are the three great tropical forests. The Amazon, the Congo and Indonesia and Borneo. They’re all massively important, and in all of them over the last 20 years we’re seen really destructive forest fires. 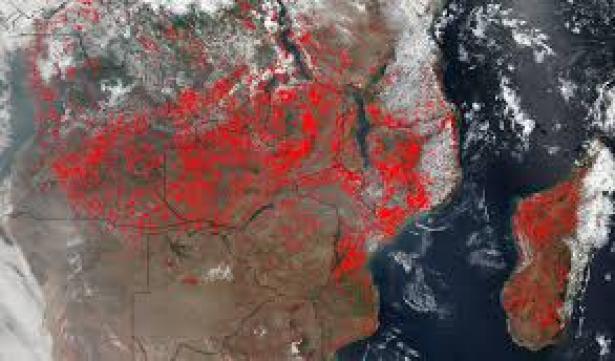 While focus has slowly grown on the fires ravaging the Amazon rainforestin Brazil, it has emerged an even greater number of fires are currently burning in central Africa.

Data from Nasa’s Fire Information for Resource Management System, showed at least 6,902 fires in Angola and 3,395 burning in the Democratic Republic of the Congo.

The huge surge in fires in the Amazon this year has caused global concern. The rainforest stores enormous amounts of carbon in the complex ecosystem, it is the most biodiverse land area on earth, and its conservation is essential if we are to limit the impacts of global heating.

In Africa however, the extent of the fires affecting forested areas is unclear. In agricultural areas purpose-lit fires have been a common part of farming techniques for thousands of years.

But lack of traditional grasslands is driving increased slash and burn clearing of forests in parts of Africa, and therefore concerns are growing.

In the Amazon scientists have warned the rapid rate of deforestation means the forest is increasingly at risk of reaching a tipping point at which huge swathes of the rainforest will degrade into areas of dry savannah.

“You’d have extensive parts of the southern and eastern Amazon and parts of the central converting to savannah, and maybe to even drier conditions,” Professor Thomas Lovejoy of George Mason University told The Independent.

The forest fires in Brazil have also largely been caused by agricultural activity, as landowners burn stubble after harvest, use illegal slash and burn clearing techniques to create land for crops or rearing beef, or have carried out logging to raise the value of the land.

Despite increasing global awareness of the problem of illegal deforestation, greater areas of tropical rainforest are being lost than ever. More tree cover was lost across the world in 2016 and 2017 than in any other year this century.

In the Brazilian Amazon, the rate of deforestation in July hit 870 square miles, or about five football pitches every minute of the entire month.

Professor Lovejoy’s colleague, Carlos Nobre, a senior researcher at the University of São Paulo, told The Guardian deforestation was on course to rise by 20-30 per cent this year and was “very likely” to pass 10,000 sq km for the first time in over a decade.

Richard Black, the director of the Energy and Climate Intelligence Unit said it was difficult to assess whether the fires in Africa represented similar problems as those currently affecting the Amazon.

He told The Independent: “Clearly both in the Amazon and in the Congo, burning by small scale farmers is a way of life, it does happen. What’s different is the increase in the Amazon this year over last year – almost a doubling in the number of fires.”

“Bolsonaro seems to be encouraging this, but I haven’t seen any evidence of this in any of [the African] countries, is a key difference I think.”

Emmanuel Macron, who has traded rhetorical blows with Brazilian president Jair Bolsonaro, described the Amazon as the “lungs of the world”, and said “our house is burning” in a tweet last week.

The G7 countries pledged $20m (£16m) towards helping fight the fires, following a summit in France.

But on Tuesday Brazil said it was rejecting the offer.

Mr Macron later drew attention to the fires in sub-Saharan Africa and said “We are considering the possibility of launching an initiative similar to the one we just announced for the Amazon.”

Mr Black told The Independent: “I think there’s an utter naivety in the whole idea.

“With the Bolsonaro situation, it’s clear one of the reasons why he’s keen to see the Amazon exploited is because he doesn’t like the international attempts [at intervention].

“There has been, for a number of years now, a big operation to put money into the Amazon. What Bolsonaro shows is that programmes like this can only really endure if there is genuinely political will in the recipient country to keep these things going. Because there’s no point in paying to protect a forest for five years.

“Also the sums of money are piffling if you’re talking about serious protection efforts.”

The Nasa data also shows fires are affecting parts of the Amazon outside Brazil, with fires in eight other South American countries including Bolivia. Thousands of fires are also burning across Indonesia.

“There are the three great tropical forests. The Amazon, the Congo and Indonesia and Borneo. They’re all massively important, and in all of them over the last 20 years we’re seen really destructive forest fires.”

Harry Cockburn writes news, features and opinion pieces. He has also worked as one of The Independent’s newsdesk editors since October 2016. His work frequently focuses on the environment and global climate change.