Will Chicago Educators Teach Another Lesson about Solidarity?

If Lightfoot wanted to plug the budget hole without cutting services and freezing hiring, the money is there. But don’t count on it—not without a fight. 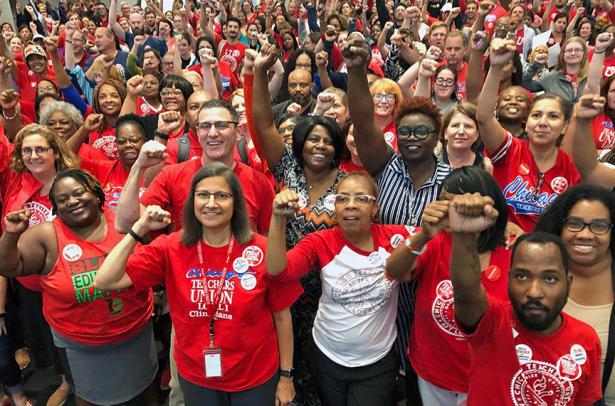 Chicago Mayor Lori Lightfoot promised “a city reborn” after eight miserable years of Rahm Emanuel. But the people who make that city’s schools run are disappointed to find so little difference from the bad old days of Mayor 1 Percent.

With a contract showdown looming this fall, Chicago teachers and education workers, along with activists and organizations who support their vision of the schools Chicago students and teachers deserve, are getting ready for a fight—by turning to the ingredients that won before: solidarity, struggle and strikes.

As teachers returned to the classrooms in late August to prepare for the school year, the latest blast from the past was an old-fashioned campaign of red-baiting. The Chicago Tribune led the way with a front-page article about three teachers and a CTU staffer who toured Venezuela in July—which falsely implied the union sponsored and paid for the trip. A few days later, a Wall Street Journal editorial added a swipe at CTU President Jesse Sharkey, finding him guilty of the “crime” of belonging to a socialist organization.

No one expects anything less from the Tribune, which proudly follows in the anti-labor footsteps of its robber-baron founders, the McCormick family. But what about Lightfoot, who promised during her campaign that she would ensure the teachers’ contract was settled without a strike?

Jim Staros, a social science teacher at King College Prep, put his finger on the problem in the opening episode of the new CTU Speaks! podcast he cohosts: “Candidate Lightfoot and Mayor Lightfoot seem to be very different people.”

Lightfoot talked about improving public education during the campaign, but talks between Chicago Public Schools (CPS) and the CTU tell a different story. “Her team at the negotiating table is the same team that Rahm Emanuel had at the negotiating table,” CTU Vice President Stacy Davis-Gates said in an interview with In These Times. “I think it’s pretty impossible to have a transformative lens but employ some of the same people who have been responsible for closing 50 schools and dismantling special education services.”

As a candidate, Lightfoot promised “to respond to the anger and frustration of parents and teachers who feel like they’ve been shut out of critical decisions about how their children are going to be educated.”

But as mayor, she’s already used her influence to hinder democratization. Earlier this year, the state House passed two bills—one to create an elected school board in Chicago and another to overturn a 1995 measure that bars the CTU from bargaining over class size, clinician and paraprofessional staffing, and other crucial issues. But Lightfoot urged state Senate President John Cullerton to stall the bills, and the conservative Democrat was happy to oblige.

That 1995 amendment to a state labor law governing teachers helps explain why a fact-finder’s report released this week didn’t even try to find the facts about eighteen of the twenty-one issues that the union said were critical to negotiations.

Arbitrator Steven Bierig largely sided with CPS on the three issues where he ventured a position: salary, health care, and length of the contract. But he claimed that class size, special education, school closings, and clinician, counselor, and PSRP staffing are out of bounds, and he punted on teacher evaluation, paid time off, teacher prep time, and making Chicago schools a sanctuary for the undocumented, among other issues.

“What we’ve been saying in public and at the table is ‘put it in writing,’” says Michelle Strater Gunderson, a first-grade teacher and a trustee and executive board member of the CTU. “The Chicago Teachers Union contract is not only a document that protects workers’ rights, salaries, and conditions. It is the only enforceable vehicle we have for improving our schools and the learning environments of all Chicago Public School students. We have learned through experience not to rely on the good will of the school district and appointed school board.”

It’s easy to see why many Chicagoans view Lightfoot as the “anti-Rahm.”

In 2010, when Emanuel quit as Barack Obama’s chief of staff to become the anointed successor of Chicago Mayor Richard M. Daley, he outright bragged that he was going to show the CTU who was boss. Before even becoming mayor, he used his power as a Democratic Party kingpin to drive through the 2011 state law requiring the CTU to get a super-majority of 75 percent of all members, not just those who vote, to authorize a strike.

Rahm thought he had heard the last of the uppity teachers. But he thought wrong.

Nearly 90 percent of all CTU members voted to strike, including 98 percent of those who cast a ballot. When the first day of the strike came on September 10, 2012, it was impossible to drive, bike, or walk around the city without coming across a picket line at one of the six hundred schools or an impromptu demonstration taking to the streets. At the afternoon mass rallies where tens of thousands of union members and supporters painted the downtown streets CTU red, the hatred of Emanuel was palpable.

By contrast, Lightfoot ran for mayor on an education platform that borrowed from the proposals the CTU has been making for years. Once in office, her statement about the schools budget released in August emphasized new funds to renovate the neighborhood schools Emanuel neglected and to staff wraparound services that the union has been pleading for.

But there’s less to the Lightfoot budget than meets the eye. According to the CTU’s analysis, despite the city’s claims that it will spend millions to hire more nurses, social workers, and case managers, the hard numbers show no increase and even a declinein health care workers overall.

Meanwhile, Mayor Lightfoot regularly retreats to the gospel of austerity preached by Emanuel and Daley to justify moving slowly—or not at all—on Candidate Lightfoot’s promises to transform the city. Last week, she imposed a city hiring freeze as an ominous prelude to a pre–Labor Day weekend “State of the City” speech that the media is billing as a grim reckoning with “Chicago’s massive budget deficit.”

But in this case, there’s more than meets the eye—a lot more money to meet the needs of working-class Chicago for quality public schools, reopened mental health clinics and public health care, affordable housing, and much more.

In the schools specifically, the union estimates that CPS is getting a billion dollars more each year compared to the last contract battle in 2016, thanks to changes in the state’s education funding formulas and other sources. And that’s not to even mention the tax-increment financing (TIF) system—the mayoral-controlled slush fund of property tax revenue diverted from schools and other public services for “development” projects that invariably ends up in the hands of real estate barons with connections to City Hall.

Total TIF revenue in 2018 soared to $841 million—well above the $700 million deficit that Emanuel stuck the city with before scampering out of office. If Lightfoot—who claimed to be an opponent of the TIF system as a candidate—wanted to plug the budget hole without cutting services and freezing hiring, the money is there. Better yet, she could abolish the TIF system once and for all.

But don’t count on it—not without a fight.

The CTU is getting ready for one. Teachers say an all-members union meeting last week was devoted to reporting on negotiations, but also reviving Contract Action Teams (CAT) in each school. The CATs were critical to building for the 2012 strike by mobilizing rank-and-file leaders who provided a chain of communication to reach out and involve every member. The Chicago example has left its mark on the labor movement—the CAT system was adopted by United Teachers Los Angeles for their successful strike last January, for example.

Last weekend, supporters of the teachers relaunched the Chicago Teachers Solidarity Committee (CTSC), which played an important role mobilizing support in 2012 and 2016. The CTSC involves organizations such as Parents 4 Teachers, community groups like the Kenwood-Oakland Community Organization, the Democratic Socialists of America, and others.

On August 28, the union and its supporters will rally outside the next meeting of Lightfoot’s newly appointed Board of Education. The time is 9 a.m., and the place is 42 W. Madison St.

All this is building toward a strike authorization vote in September if the city fails to meet the teachers’ demands. A walkout could take place by late September.

“Preparing for a strike and actually going on strike are monumental tasks,” says Gunderson. “A strike can never be entered into lightly, but in the end, it is the most important power that teachers have in a system that has been left to stagnate and fail.”

Midwest Socialist exists to show how activists and politicians from DSA and the broader socialist movement are working to create a more equitable, more democratic society for all people.