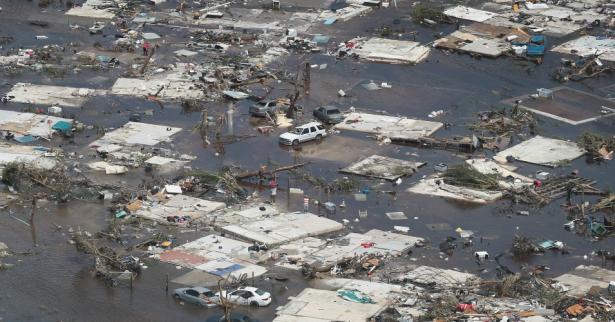 An aerial view of damage caused by Hurricane Dorian is seen on Great Abaco Island on Sept. 4, 2019 in Great Abaco, Bahamas. A massive rescue effort is underway after Hurricane Dorian spent more than a day inching over the Bahamas, killing at least seven a, (Photo: Scott Olson/Getty Images)

While Hurricane Dorian marched up the U.S. Southeastern coast Wednesday after devastating the Northern Bahamas, advocates for ambitious climate action reiterated the global emergency's connection to extreme weather—even as an analysis showed that major corporate news outlets are failing to report on it.

After making landfall as a Category 5 hurricane Sunday, Dorian crawled across the Bahamas Monday and Tuesday—leaving a trail of utter destruction in its wake.

While hurricanes are a natural part of our climate system, recent researchsuggests that there has been an increase in intense hurricane activity in the North Atlantic since the 1970s. In the future, there may not necessarily be more hurricanes, but there will likely be more intense hurricanes that carry higher wind speeds and more precipitation as a result of global warming. The impacts of this trend are likely to be exacerbated by sea level rise and a growing population along coastlines.

"Although Hurricane Dorian exemplifies what climate scientists have warned about, major U.S. media outlets are failing to connect the climate crisis to the strongest Atlantic storm ever to hit land," Public Citizen declared in an analysis Tuesday.

The consumer advocacy group found that "between Friday and Monday, climate or global warming was mentioned in just 7.2 percent of the 167 pieces on ABC, CBS, NBC, CNN, MSNBC, and Fox. The top 49 newspapers by circulation didn't do much better. Of them, 32 covered Dorian in their print editions, but only eight papers connected Dorian to climate. Of 363 articles about Dorian in those papers' print editions, just nine (2.5 percent) mentioned climate change."

"It is mind-boggling that major media outlets can report about a storm of epic proportions that is exactly what climate scientists have warned about yet fail to mention two key words: 'climate change," said Allison Fisher, outreach director for Public Citizen's Energy Program. "We can't address the looming climate catastrophe if we aren't talking about it."

Public Citizen was far from alone in that observation. As New York Times columnist David Leonhardt wrote Tuesday, "much of the conversation about Hurricane Dorian—including most media coverage—ignores climate change." According to him, "That's a mistake. It's akin to talking about lung cancer and being afraid to mention smoking, or talking about traffic deaths and being afraid to talk about drunken driving."

"The media needs to do more," Justice Democrats wrote in an email to supporters Wednesday. "These natural disasters are escalating because of climate change, but too few reporters and pundits are willing to make that connection clear to the public. It doesn't matter if the climate crisis is a politicized issue—we can't afford to protect the feelings of conservatives and climate deniers in an era where we're seeing record high temperatures, massive ice melts, and deadly natural disasters."

While much of the corporate media failed to make the climate connection in Dorian coverage, Rep. Alexandria Ocasio-Cortez (D-N.Y.) acknowledged it on Twitter Tuesday evening. Sharing a video taken from a helicopter over the Bahamas, she tweeted, "This is what climate change looks like: it hits vulnerable communities first."

This is what climate change looks like: it hits vulnerable communities first.

I can already hear climate deniers screeching: “It’s always been like this! You’re dim,” etc.

No. This is about science & leadership. We either decarbonize&cut emissions, or we don’t & let people die. https://t.co/paUHKAp03e

Ocasio-Cortez, the House's lead sponsor of the historic Green New Deal resolution unveiled in February, added that the global community has a clear choice: either decarbonize and dramatically reduce planet-heating emissions—or don't, and "let people die."

Aerial footage of the Bahamas post-Dorian was also shared on social media by Greta Thunberg, the 16-year-old whose protests outside the Swedish Parliament last year helped spur the global climate strike movement. The teen activist tweeted Wednesday, "How many more nations in ruins do we need to see?"

How many more nations in ruins do we need to see?#ClimateEmergency#EcologicalEmergency https://t.co/rHvNjpGnFc

The indepedent news program Democracy Now! is among the outlets that have acknowledged how the climate crisis relates to Dorian, including with a Wednesday morning report entitled, "'This Is a Climate Emergency': Islands Devastated by Dorian Are on the Frontlines of a Dying Planet."

"While the science has yet to come in on the specifics of just how much worse climate change made Dorian, we already know enough to say that warming worsened the damage," Michael Mann, a professor at Pennsylvania State University, and Andrew Dessler, a professor at Texas A&M University, wrote in an op-ed published by The Guardian Wednesday.

After outlining what scientists do know about planetary heating and hurricanes—including the evolving theory that climate change may cause storms to stall, leading to extra flooding and damage—the pair concluded that Dorian is "a preview of the climate crisis to come. The only question is whether we have the foresight to address it."

"Global heating made Hurricane Dorian bigger, wetter – and more deadly" | My op-ed with @AndrewDessler in The @Guardian: https://t.co/eWBHpB6Jgv

Emergency response and humanitarian crews continued assessing the damage in the Bahamas and providing relief to residents of the islands Wednesday while Dorian moved parallel along the Florida coast as a Category 2 hurricane with maximum sustained winds of 105 mph. According to the National Hurricane Center, as of mid-afternoon Wednesday, there are various hurricane, tropical storm, and storm surge watches and warnings in effect between Florida and Virginia.