Having given his first political speech when not yet a teenager, Leon at 97 worked to pass on the wisdom gained from decades of organizing and deep thought to a new generation. 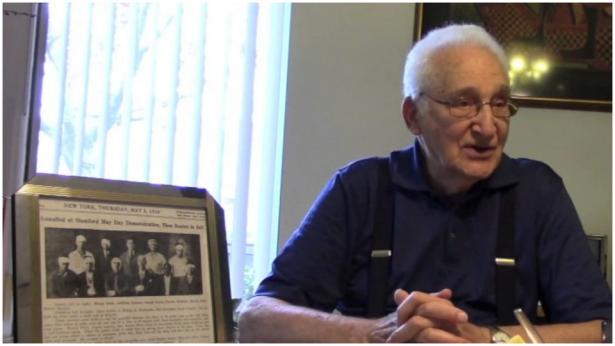 Leon Wofsy, with a 1930 newspaper clipping from the Daily Worker featuring his father Isadore Wofsy and other demonstrators who were beaten by police on May Day that year.,credit: Berkeley Historical Society // People's World

When Leon Wofsy died at age 97 on Aug. 25, 2019, progressive movements throughout the United States lost a champion. Leon accomplished many things in his long life. He was an innovative scientist, and a fine writer and teacher, but above all things, he was a patient and peerless organizer.

He honed those skills during the Great Depression and the political repression that followed in the wake of World War II. Child of a radical working-class family, he gave his first political speech at age 11 in 1932 at a rally for William Z. Foster, the presidential candidate of the Communist Party. He threw himself into organizing just two years later, cohering a high school group that affiliated with the radical American Student Union. As a college student at City College of New York from 1938 to 1942, he became president of the Marxist Cultural Society and then leader of the Young Communist League.

Drafted into the U.S. Army and focused on the “Double V” (victory over fascism abroad and victory over racism at home) effort during World War II, Leon had his nose broken by an MP when protesting the treatment of Black soldiers. Heading the Communist Party-linked Labor Youth League from its founding in 1949 to 1956, Leon was called to testify before the Subversive Activities Control Board during the height of the McCarthy period.

After leaving the Communist Party in 1956, Leon began his journey as a scientist, earning a Ph.D. in 1961 and conducting pioneering medical research on the use of antibodies to deliver effective therapies directly and specifically to the site of disease. Denied faculty positions at several universities because of his political views, Leon was finally hired as a faculty member at the University of California at Berkeley in 1964.

And he immediately brought the organizing skills he had developed over the previous 30 years to another round of the good fight.

In the fall of that year, the university was embroiled in a battle over free speech and the right of students to organize politically on the campus. It was a critical moment in the history of the country. Students had gone into the South during Freedom Summer to help register black voters and challenge Jim Crow laws. When Bay Area students came home in the fall, they joined the growing northern civil rights movement that was confronting racial discrimination in San Francisco and Oakland.

The ability to use campuses to organize boycotts, picket lines, and sit-ins was essential to the civil rights movement, and the university was determined to choke off that venue. That it failed was in part because of Leon Wofsy.

There were many reasons the university was forced to retreat from its efforts to muzzle political activism, but a key moment for the Free Speech Movement (FSM) was when the Faculty Senate supported the student’s demands. That might not have happened were it not for Leon.

At the time, the FSM’s nickname for the Faculty Senate was “the hutch,” a body composed of rabbits that would bolt for their burrows at the first hint of trouble. But Leon could organize anything, even rabbits. He didn’t do it alone, of course, and many other faculty members contributed, but Leon knew how to get people who spook easily to hold their ground.

He built up a core of people and began to push the Senate—gently, because rabbits are timid—to act. This was not something he did out front. He was a formidable debater (as Ronald Reagan would discover), but his style was small meetings, phone calls, breakfast gatherings, persuasion. He got people to move at their own pace—and then to go a bit further.

Good organizing means dampening one’s ego, particularly in academia, where high self-regard is sort of part of the job description. But Leon always knew that the people being organized, not the organizer, were the point. It was frustrating and at times plain painful, but the Senate majority stood up to the university in 1964, even if its fortitude later diminished.

On every issue—whether it was the war in Southeast Asia, the Third World Strike, the women’s movement, Latin American intervention, or the anti-apartheid movement—Leon pushed that rock back up the hill. But unlike Sisyphus, the rock never rolled all the way back down, because he knew how to change people’s minds. And he shrugged off the losses and retreats because he was in it for the long haul. As long as you made some progress that was enough because it laid the groundwork for the next fight.

He was individually brave, but he knew that serious politics was not a matter of singular courage. What was important is that you stood with thousands and tens of thousands. That is what he was after. The old-fashioned way of putting that was that Leon thought serious politics were mass politics. And he firmly believed in the sentiments of Shelley’s poem in the aftermath of the 1819 Peterloo Massacre: “Rise, like lions…Ye are many—they are few!”

If he had to, however, Leon could play Horatius at the bridge. When then-Governor Ronald Reagan tried to turn a so-called “meeting” with the UC faculty into a photo opportunity to denounce “radicals” at UC, Wofsy pushed himself into the middle of the cameras and challenged the governor directly. Since Reagan couldn’t talk without a script, it did not go well for the governor.

When he retired, Leon organized retirees into discussion groups on domestic and foreign politics. He wrote a blog to persuade people about issues like Israel and the Palestinians, racism, and the importance of historical events like the Spanish Civil War.

In short, he never stopped organizing, thinking, re-thinking, and re-configuring. His co-authored essay in 2015 on the necessity to rethink U.S. foreign policy accurately predicted many of the current international crises and challenged Americans to examine basic assumptions about the world. In 2017, he offered his unique first-hand reflections on the history of socialist struggle in the 20th century in a series of interviews with the Berkeley Historical Society that are available for viewing here.

Just a month before he died, Leon gave a presentation on Spain and the fight against fascism in the 1930s and ’40s to a class of activists mostly in their 20s and 30s studying ways to combat today’s racist right. He then posted the text of his remarks, “Looking Again at Spain,” on his blog. It was his final post. Having given his first political speech when not yet a teenager, Leon at 97 worked to pass on the wisdom gained from decades of organizing and deep thought to a new generation.

Leon Wofsy will be missed as a parent and a grandparent, as a scientist and a friend. But he will also be missed as an organizer, someone who deeply believed that it is possible—indeed, imperative—to persuade and move human beings to build a kinder, more equal, and more peaceful world. And for almost a century he did a really good job doing just that.

[Conn Hallinan is a columnist for Foreign Policy In Focus. A retired journalism professor, he previously was an editor of People's World when it was a West Coast publication.

Max Elbaum is author of Revolution in the Air, recently reissued by Verso Books, and an editor of OrganizingUpgrade.com.]