Parliament stands empty shut down by a Prime Minister running away from scrutiny. But we mustn’t mistake the drama at Westminster for real politics. Real politics is about giving power to people so they can take control of their own lives. 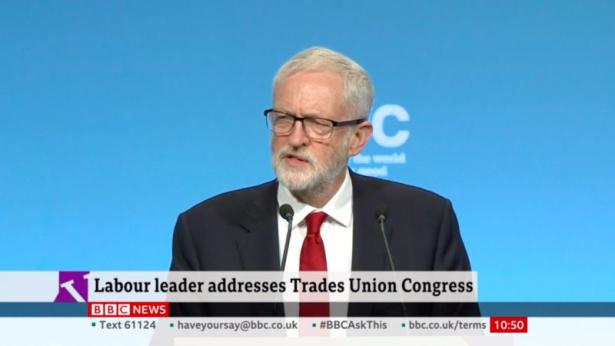 Congress, thank you for that warm welcome.

It’s an honour to be asked to address you again.

I’m proud that trade unions and the Labour Party are working as closely together now as we ever have.

Because together we are one movement – the Labour Movement, the greatest force for progressive change this country has ever known.

So thank you to every single one of you for what you do for your members … and for our society.

And thank you to Frances O’Grady for your work as the TUC’s General Secretary. You are a brilliant voice in standing up for workers.

I want to pay special thanks too ... to TUC President Mark Serwotka. Mark... you are one of the most dedicated... and one of the bravest trade union leaders we’ve ever had … and you’re a walking advertisement for our wonderful NHS.

Your union... PCS... is doing brilliant work representing workers at the BEIS Department in Whitehall... some of whom were here yesterday...and who have been on strike for two months now, because the Government won’t pay them the living wage. Solidarity to them.

I also want to send solidarity to the occupying workers at Harland & Wolff... some of whom have joined us here today.

Congress … this time last week … the Conservatives and DUP had a majority of 1 in the House of Commons.

Last time I checked … their majority was down to -45.

Today Parliament stands empty … shut down by a Prime Minister running away from scrutiny.

But let me say this. We mustn’t mistake the drama at Westminster for what real politics is about.

For most people all of that is a million miles away.

What truly matters is the reality of their everyday lives – in their community, on the streets, at their workplace.

Real politics for me isn’t about the parliamentary knockabout … with all its baffling language and procedures.

Real politics is about giving power to people who don’t have a lot of money … and don’t have friends in high places ... so they can take control of their own lives.

He wants to stage a showdown over a No Deal Brexit … that he can repackage as a battle between parliament and the people – with the people in this melodrama … played by none other than… that man of the people … Boris Johnson himself.

But the idea that Johnson … and his wealthy friends and backers … somehow represent the people is truly absurd.

Johnson’s reckless No Deal would destroy jobs … push up food prices in the shops … and cause shortages of everyday medicines that people rely on.

And who bears the cost of that?

It wouldn’t be Johnson and his wealthy friends. It’s not their livelihoods on the line. It would be the rest of us.

Just as it wasn’t the bankers Boris Johnson still defends ... who paid the price for the financial crash of 2008 ... it was tens of millions of people who had nothing to do with it.

For the Tories this is about so much more than leaving the European Union.

It’s about hijacking the referendum result to shift even more power and wealth to those at the top.

They will use a No Deal crash … to push through policies that benefit them and their super-rich supporters … and hurt everyone else – just as they did after the financial crash.

Under the cover of No Deal they will sell off our public services, strip away the regulations that keep us safe, and undermine workers’ rights.

And they will cement all of this in a race-to-the-bottom trade deal with Donald Trump.

Be in no doubt … a No Deal Brexit is really a Trump Deal Brexit ... leading to a one-sided US trade deal negotiated from a position of weakness.

It will put us at the mercy of Trump … and the big US corporations itching to get their teeth further into our NHS ... sound the death knell for our steel industry ... and permanently drive down rights and protections for workers.

I am not prepared to stand by and let that happen.

And we won’t be importing so called ‘right-to-work’ laws from the US ... an Orwellian name if ever I heard one ... or any other union busting laws being opposed by our comrades in American unions ... that Trump will want to impose on British workers.

A Trump Deal Brexit would be a betrayal of the generations of workers who went before ... who fought so hard to win the rights ... and build the public services ... that bind our society together.

That’s their legacy, their gift to us. We’re not going to let Boris Johnson trade it all away for a sweetheart deal with Trump.

That’s why our priority is first to stop No Deal ... and then to trigger a general election.

Amber Rudd’s resignation confirmed that the government is not serious about trying to get a deal in Brussels.

As the prime minister’s top adviser reportedly said … the negotiations are “a sham.”

No one can trust the word … of a prime minister who is threatening to break the law … to force through No Deal.

So a general election is coming … But we won’t allow Johnson to dictate the terms.

And I can tell you this: we’re ready for that election. We’re ready to unleash the biggest people-powered campaign we've ever seen.

And in that election ... we will commit to a public vote … with a credible option to leave ... and the option to remain.

Labour is on the side of the people in the real battle against the born-to-rule establishment that Johnson represents.

We stand for the interests of the many – the overwhelming majority who do the work and pay their taxes – not the few at the top … who hoard the wealth and dodge their taxes.

It’s Labour’s historic mission to transform people’s lives … and that transformation begins in the workplace.

In our country … workers have been losing out for far too long.

For 40 years … the share of the cake going to workers has been getting smaller and smaller.

It’s no coincidence that the same period has seen a sustained attack on the organisations that represent workers – trade unions.

We have witnessed a deliberate, decades-long transfer of power away from working people.

The consequences are stark for all workers ... whether members of a trade union or not.

Pay is lower than it was a decade ago in real terms.

I’m told that the last decade has seen the biggest squeeze on wages since the Napoleonic Wars.

Personally I can’t remember that far back … so I tried to contact Jacob Rees-Mogg this morning to check … but he was fast asleep again … on the government benches.

Things cannot go on as they are.

And it must be change that gives power to the true wealth creators – the workers.

So today we are announcing that the next Labour government will bring about the biggest extension of rights for workers that our country has ever seen.

We will put power in the hands of workers.

What will that mean for people? Better wages, greater security, and more say.

We’ll give workers a seat at the Cabinet table … by establishing a new Ministry of Employment Rights.

Our shadow Secretary of State for Employment Rights, Laura Pidcock … will explain the detail of our plans when she speaks later. But let me give you an overview.

At the core of its work will be rolling out collective bargaining across the economy … sector by sector.

It’s a system they have in many of the most successful economies around the world.

It prevents undercutting on wages … fosters workplace stability … and encourages businesses to invest in productivity.

It’s only by acting together, collectively, that workers can really make their voice heard.

So within 100 days of Labour taking office ... we will repeal the Tory Trade Union Act.

There’s nothing scary about trade unions .. however hard the billionaire-owned media tries to paint them as such ... They are the country’s largest democratic organisations … rooted in the workplace.

Why should democracy end when you walk into work? Why should the place where you spend most of your day sometimes feel like a dictatorship?

If ... as an individual ... you’re asked to work in conditions that are unsafe ... what choice do you have?

It’s take it or leave it.

But as part of a union ... with strength in numbers ... you can demand a safe working environment.

I want to say this to everybody who is watching beyond this hall.

But there’s a big role for government, too ... in extending workers’ legal rights.

And Labour won’t tell people they have to work until they are 75 before getting their pension.

But rights only mean anything if they’re enforced.

Too many employers are getting away with flouting laws. Nearly half a million people are still being paid less than the minimum wage.

We’ll put a stop to that. We’ll create a Workers Protection Agency … with real teeth … including the power to enter workplaces … and bring prosecutions on workers’ behalf.

If you’re a worker with a boss who makes you work extra hours for no pay … or forces you into dangerous situations … you deserve a government that’s on your side … and ready to step in to support you.

Our proposals have been developed in consultation with experts … and I would like to thank John Hendy and Keith Ewing in particular for all their help and advice.

Congress, what we’re outlining today will lay the ground for a fundamental transformation of our economy in favour of the many.

But I have some bad news. We’ve been found out.

Last week the Financial Times said that Labour is, and I quote … “determined to shift power away from bosses and landlords and to workers and tenants.”

Well … there has been no shortage of rather unkind reporting about our party over the last few years … but this time they’ve got it absolutely right.

We will put workers on company boards … and give the workforce a 10% stake in large companies … paying a dividend of as much as £500 a year to each employee.

And we will give tenants more rights … including caps on rent rises.

And that principle of empowering people doesn’t just apply to the workplace.

We’ll bring rail, mail, water and the national grid into public ownership … so the essential utilities that people rely on are run by and for the public... not just shareholders.

I want to thank all the unions that are working with us to develop our new model of public ownership.

We’re not recreating the nationalised boards of the past … we’re creating the democracy of tomorrow.

And as we set out how our future economy will operate ... we cannot ignore the most pressing issue of all ... the climate crisis.

Because the destruction of our climate is also a class issue.

It’s working class communities that suffer the worst air pollution – think of all the children living on polluted streets.

And it’s working class people who will lose their jobs as resources run down.

The super-rich and the giant corporations will never solve the major design flaws in our economy that are causing the problem ...because interests are tied up with them …

And we will locate these new industries in parts of the country that have been held back by successive governments ... that have focused on the richest in the City of London.

Congress … the coming general election will be a chance for a real change of direction.

In the next few weeks the establishment will come after us with all they’ve got … because they know we’re not afraid to take them on.

We’re going after the tax avoiders.

We’re going after the bad bosses.

We’re going after the dodgy landlords.

We’re going after the big polluters destroying our climate.

Because we know whose side we’re on.

We’re creating a society of hope and inclusion... not poverty and division.