The US Has “Disappeared” More Than 42,000 Migrants. Where’s the Outrage?

The most successful of Trump’s anti-immigrant measures up until now — possibly the most vicious — hasn’t been getting the attention it deserves. In operation since late January, Migrant Protection Protocols (MPP), originally called “Remain in Mexico” 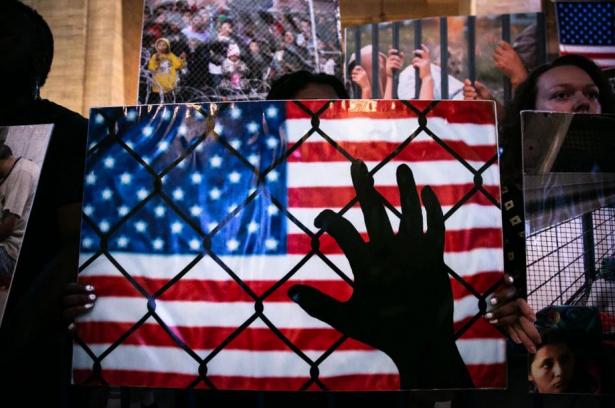 “Remain in Mexico,” allows the U.S. government to push most non-Mexican asylum seekers into Mexico once immigration officials have cleared them to make an asylum claim. As of early September, the number of people forced into Mexico under MPP had reportedly risen to more than 42,000.

Immigration authorities say that these migrants are able to pursue their asylum cases while waiting in Mexico, but this is nonsense. It’s difficult for impoverished asylum seekers to get legal representation even while inside the United States; from across the border, it’s virtually impossible. At the end of June, a grand total of 1.3 percent of these asylum-seekers had succeeded in finding a lawyer, according to an August report by the U.S. nonprofit Human Rights First. So far, only one of the applicants is known to have won asylum.

Moreover, these migrants need a way to live if they’re going to pursue their claims. Many planned to stay with U.S.-based family or friends when they came to this country; in Mexico, they have no support networks. Lacking Mexican work permits, they can at best scrape by with jobs in the informal economy that barely cover the necessities, if that. Some turn to Mexico’s shelters for migrants or homeless people, but the shelters in Mexican border cities are already overwhelmed. Many asylum seekers — including children, pregnant women and people with disabilities — end up sleeping in tent encampments or in the open air.

Even if they find work and shelter, migrants are in constant danger; the only protection MPP offers is in the program’s Orwellian name. For months, asylum seekers have been pushed into cities with high crime rates like Tijuana and Ciudad Juárez. In July, the program began sending many to Nuevo Laredo and Matamoros, two cities in Tamaulipas state. The U.S. State Department assigns Tamaulipas a Level 4 “do not travel” warning — the same as for Afghanistan, Iraq and Syria.

In their August report, Human Rights First’s researchers documented 42 cases of rape, kidnapping, assault and/or criminal pursuit affecting migrants placed in Mexico under MPP, and in publicly available materials, they found another 74 cases of violence or threats. The report’s authors said these numbers were “likely a gross underestimate of the harm to returned asylum-seekers given the limited monitoring of the program to date.”

It’s difficult for impoverished asylum seekers to get legal representation even while inside the United States; from across the border, it’s virtually impossible.

On September 11, the U.S. Supreme Court issued an order allowing the government to go ahead — for now, at least — with another measure against non-Mexican asylum seekers. Like MPP, the new policy keeps the migrants hidden away in Mexico, but it bars them from even applying for asylum. While it’s uncertain what effect this will have on MPP, clearly activists need to fight back against both policies.

Out of Sight, Out of Mind?

There’s hardly any information about what happens to people in the MPP program. How many have been victims of crime? Have any been killed? How many have given up and returned to their home countries, and have they become crime victims there? No one knows. U.S. and Mexican authorities aren’t keeping track of these outcomes, and it’s extremely difficult for reporters, immigration lawyers and human rights researchers to get more than anecdotal accounts.

For the Trump administration, this is a feature. The government’s high-visibility attacks on immigrants have often backfired, as happened in June 2018, when the family separation policy provoked popular outrage. MPP may be an even more egregious flouting of U.S. asylum law: It impacts many more people, and it’s likely to have a deadlier effect, but it’s out of sight and therefore — the administration hopes — out of mind.

More than 42,000 human beings legally applying for asylum in the United States have been made to “disappear” into Mexico.

Media outlets have carried some excellent reporting on MPP, and there’s been legal and political pushback. In February, the American Civil Liberties Union challenged the program with a suit (Innovation Law Lab v. McAleenan) filed in San Francisco federal court — an action backed by the union for the government’s own asylum officers.

Likewise, in August, a group of 24 senators sent the administration a letter calling on it to end the policy. But Trump’s officials aren’t known for responding to reasoned arguments, and in May, a three-judge panel of the Ninth Circuit Appeals Court overturned a stay the San Francisco judge had placed on the program. The supposedly ultra-liberal Ninth Circuit has put off oral arguments in the case until October, leaving tens of thousands of asylum seekers in Mexican limbo. Meanwhile, the Supreme Court’s September 11 order allows the government to bar new asylum seekers at least until December.

As immigration attorney Shouan Zhoobin Riahi notes, “We need to be organizing large-scale protests against the MPP, Trump’s concentration camps, and the new asylum ban.”

Indeed, the one thing that can turn this situation around is militant activism of the sort that confronted the Muslim ban and the family separation policy. The resistance may understandably be suffering from outrage fatigue, but this is no time to let up the pressure. If activists don’t seize the initiative, the Trump administration will have gotten away with two of its gravest human rights violations to date.

[David L. Wilson is co-author, with Jane Guskin, of The Politics of Immigration: Questions and Answers (Monthly Review Press, July 2007). An expanded and updated second edition appeared in May 2017. Follow the authors on Twitter: @Immigration_QA.]