As a US-friendly no-deal Brexit inches closer, Bonnie Castillo of National Nurses United explains why US nurses have joined the fight against NHS privatisation. 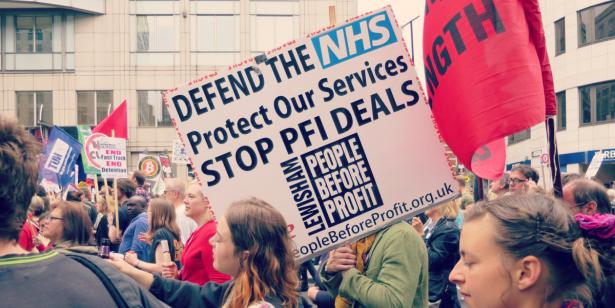 The World Transformed festival runs along side the Labour Party Conference in Brighton this month., Alan Stanton via flickr.com CC 2.0

The creeping corporatisation threatening the UK National Health Service calls to mind a scene from a horror movie. In the film, a stalker’s menacing phone calls originate frighteningly close to home. To the audience’s terror, we eventually learn that the calls are coming from inside the house!

After US President Donald Trump said that the NHS could be one of the things ‘on the table’ in post-Brexit trade negotiations, UK leaders rushed to declare that the NHS was ‘not for sale!’ However, no amount of playing down Trump’s words can erase the fact that privatisation threats to the NHS are already coming from inside the house.

With the Health and Social Care Act of 2012 paving the way, private interests are already well entrenched in the NHS, including the Hospital Corporation of America and UnitedHealth Group among other US-based firms. The Centre for Health and Public Interest reports that there are now 53,000 NHS contracts with the private sector, and NHS private sector spending is around £10 billion a year.

I am the executive director of National Nurses United (NNU), the largest union of bedside nurses in the US. Take it from us, nothing good can come from continuing this trend. Rolling back a public good and increasingly privatising bits of the NHS will make health care in the UK look a lot more like the real-life horror movie we are living through in the United States.

As a registered nurse myself, I have experienced the moral distress nurses feel trying to heal people in our deadly, profit-driven system, which is riddled with impossible choices. Do our patients pay their astronomical medical bills – or buy food for their families? Do they get preventative care, or wait until they are in cardiac arrest to seek (expensive) attention?

Rebecca Wood, whose daughter Charlie was born with health complications, recently testified to the US Congress that prohibitive costs forced her to choose between paying for her daughter’s care or for her own. Ultimately, delaying her own care allowed a serious jaw infection to spread. She subsequently had all of her teeth pulled out, and her jaw scraped in a six-hour procedure that she undertook only under local anesthetic – general anesthesia was too expensive.

Renelsa Caudill, a registered nurse in Washington DC, recounted another horror story to Pacifica Evening News. Caudill was in the middle of conducting a CT scan for a patient with a serious heart disease when her team received a call telling them to take the patient off the table because the procedure was not covered by his insurance.

For US nurses, these experiences are more than anecdotes or statistics. We watch real people, whose names we know and whose hands we hold, suffer and die every single day in the name of corporate profits. We nurses are also patients in this same system, fighting our employers just to maintain health insurance benefits for ourselves and our families when our time and energy could be better spent fighting for safe working conditions.

That’s why the NNU has spent decades leading the grassroots movement for our own country’s version of guaranteed health care as a human right, Medicare for All. It’s heartening to see more muscle than ever before in our nurse-led people’s movement, with Medicare for All now solidly discussed in the mainstream and a majority of people in the US supporting it. In fact, most Democrats in the US House of Representatives have signed onto the Medicare for All Act 2019 – a level of support was almost unthinkable only a few years ago.

This progress has only happened on the shoulders of tens of thousands of everyday people. Using ‘big organising’ techniques – pioneered by Momentum in the UK – nurses and our allies have been able to ramp up our personal interactions with voters, neighbour by neighbour. This spring, NNU sponsored 150 Medicare for All community organising events across the United States, knocking on tens of thousands of doors and driving similar numbers of calls into Congress. The for-profit US health care industry has endless funds to fight Medicare for All, but we have the people to fight back.

As US nurses and our allies fight for health care as a human right, we are also standing in strong solidarity with our siblings in the UK to defend the NHS as a public good. Our fights are one and the same, as the same corporate interests attempt to profit from UK and US patients alike. We are both part of a global movement of everyday people fighting back against our public services, especially health care, being starved of funds, cut and privatised.

The global trend of ‘austerity-then-privatisation’ is undoubtedly a direct attack on the people. Without the security these public services provide, working people do not have the freedom to be involved fully in their communities, their unions, and the democratic process. Meanwhile, corporations are free to reap more profit, unchecked.

With Brexit looming, it’s more important than ever for a mass movement of people to fight in global solidarity against corporate health care interests circling the NHS. As NNU nurses know all too well, times of chaos for everyday people are occasions of immense opportunity for corporations.

For the past 14 years, the Registered Nurse Response Network (RNRN), a disaster relief program of NNU, has sent volunteer nurses all over the world, from Hurricane Katrina-ravaged New Orleans and earthquake-stricken Haiti, to the 50 nurse volunteers we sent to Puerto Rico after 2017’s Hurricane Maria.

Many Puerto Ricans share with their fellow US citizens an inability to afford preventative health care, a lack of which can increase the severity of chronic conditions like diabetes. When people already struggling with deprivation are suddenly battling to keep their insulin cold in a powerless, roofless house, we are really living in a state of next-level disaster.

Moments of crisis are exactly when corporations rush swoop in, under the guise of ‘privatize-public’ interest, to gobble up government contracts for work that is often poorly conducted and with little oversight. Naomi Klein dubs this the ‘shock doctrine’: using times of public shock to suspend democratic norms and ram through corporate interests.

In Puerto Rico, RNRN nurses saw disaster profiteering in action, as desperate people struggled to find food. The US government had awarded a lucrative contract to Tribute Contracting LLC, a company with no experience in large-scale disaster relief to provide 30 million meals. By the time 18.5 million meals were due, Tribute had only delivered 50,000. The meals they did deliver, sent to Puerto Rican patients with no power, did not come with the means to heat them. RNRN nurses scrambled to find groceries for desperate families with no effective government assistance in sight.

Some disasters are human-made. This spring, RNRN deployed teams of volunteer nurses and nurse practitioners to staff an Arizona shelter for migrants and asylum seekers. These volunteers witnessed the impact of the US government’s inhumane and self-created ‘immigration crisis,’ in which thousands of people legally seeking asylum are being denied that right, often incarcerated in private, for-profit facilities before being deported.

At the shelter, RNRN volunteer Maria Rojas met a Guatemalan mother whose husband had been murdered by a gang back home, causing her to flee to the United States with her son. During the arduous journey, she had to shake the bus driver awake to keep him from crashing. Now, she was being asked to get on another bus. Rojas followed the nurses’ oath to advocate for her patients by explaining to the distraught woman where she was headed next.

Rojas’ compassion was amplified by her knowledge of where the woman had already been: months earlier, Rojas had joined RNRN volunteers on a medical mission to Guatemala, providing care in poor communities hit by one of the country’s many active volcanoes. ‘The conditions people were living in before the eruption were already problematic,’ said Rojas, noting that gang violence is rampant in Guatemala, fueled by over a century of US intervention and more recently by corporate-driven climate crisis. When droughts, hurricanes, landslides, and volcanic eruptions occur, the poor are always hit hardest.

‘We saw a lot of stress-induced issues: headaches, bronchial and other lung issues, people complaining of not being able to sleep’ said Rojas. ‘We also saw children with parasites because many don’t have shoes’.

The view we have of the migration pipeline is just one reason why nurses ‘get political’ – why we call our legislators, march in the streets and join forces with progressive leaders and activists in the US and around the world. Our nurses have front row seats to disasters that have been fueled and exploited by corporate profiteering.

Nurses all over the world make an oath to protect people. We are, in a sense, the guardians of humanity. All over the planet, our patients are everyday people. Nurses can see very clearly that people and families are just trying to stay healthy and safe, a goal that is increasingly difficult in a world of extreme wealth inequality, austerity, and privatisation of public resources. That is why we stand up and fight. And as union nurses, we know that when we stand together in numbers too big to deny, we can win.

The NNU is thrilled to continue building our solidarity with progressive UK activists and leaders at The World Transformed this September. Shared strategies have already helped in our Medicare for All campaign, and UK activists have even phone banked with us – calling key US districts to tell voters how precious it is to have health care as a human right.

The forces trying to prevent Medicare for All are the same forces that want to destroy the NHS. The NNU commitment to this fight is clear: We have joined hands with nursing unions and public sector unions around the world, through Global Nurses United and its affiliation with Public Services International, to fight this common enemy in a more coordinated, intentional, and strategic fashion.

We know that corporations will always try to slip in the backdoor and privatise public services during societal confusion and chaos. But the people are organised. We are united. Because our patients’ rights have no borders, our fight to protect them also knows no boundaries. And nurses never, ever give up.

Bonnie Castillo, RN, is executive director of National Nurses United, the largest union and professional association of registered nurses in the United States.