CEOs are promising to take better care of workers with stronger benefits and higher pay. But as a union leader, I know firsthand that workers can't take these promises for granted. 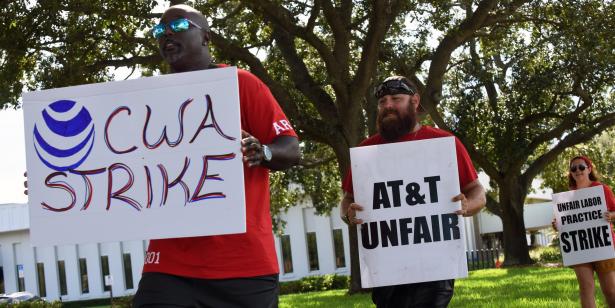 Union members in front of an AT&T office during a strike by the Communication Workers of America. , Paul Hennessy/Getty Images // Business Insider

Some say the era of corporate accountability is here, pointing to statements like the one recently put out by the Business Roundtable in which executives from companies like JPMorgan Chase, General Motors, Lockheed Martin, and Walmart affirmed their commitment to doing right by customers, employees, and the communities in which they work.

But with another Labor Day behind us, and now 49,000 General Motors employees represented by the United Automobile Workers on strike around the US, the truth is that trusting corporations to hold themselves accountable is like trusting the fox to guard the henhouse. True accountability comes from workers who join together to fight for fairness, respect, and dignity for themselves and their communities.

That was made clear when more than 20,000 members of my union across nine Southeastern states launched an unfair-labor-practice strike against AT&T — the largest private-sector strike in the South in over a decade. We entered into contract negotiations with AT&T in good faith, but the company sent negotiators to the table who lacked the authority to make a deal.

Among the CEOs who signed the recent Business Roundtable statement was AT&T's Randall Stephenson. In recent years, when it has come to investing in employees by compensating them fairly, providing them important benefits, offering training and education opportunities, and supporting the communities where the company works, AT&T more often than not fails to back its talk with action.

Our experience with AT&T and other employers shows that workers can't rely on letters from CEOs to get the treatment they deserve but instead need to raise their voices as one to make sure they are treated and compensated fairly.

We had to fight for a fair shake

When we began bargaining for a new contact this summer, AT&T negotiators came to the table with a list of demands that would dramatically increase healthcare costs, require employees to take on more responsibilities without additional compensation, force employees to be on call at all times, and make it easier for the company to send work to low-wage contractors.

Not only did this multibillion-dollar corporation no longer feel the obligation to share its record-breaking profits with the people who make it all possible, but it wanted to pad those profits by taking even more away from its highly trained, dedicated union workforce.

CWA members at AT&T already put in long hours to support our business and residential customers. Because AT&T has been cutting jobs, they are often forced to work overtime, and night and weekend work requirements force them to be away from their families, missing important milestones. Customer-service representatives at call centers are not only expected to provide assistance to customers, but they must also sell additional services or risk being fired.

We brought our own list to the bargaining table, ready to negotiate fair wage increases, continued access to affordable healthcare, and improvements to job security. But once we got into the tough issues, we discovered that AT&T's negotiators thought we were on a one-way street. They had their list of demands but did not have the authority to make decisions on the issues our members had brought to the table. Once it became clear AT&T was not going to bargain in good faith, it was only a matter of time before workers walked off the job.

I've heard people say that unions are unnecessary, that if you don't like what the boss is offering, you should just find another job. Is that what we really want? Every person for themselves, giving up without a fight?

What I saw on the picket lines was amazing. In just four days, thousands of people from different backgrounds joined together as one family. They were unified, their unity was powerful, and it worked. AT&T came back to the negotiating table ready to make a deal, one that recognized workers had earned the right to share in the success of the company through family-supporting wages and benefits and job security.

The Business Roundtable executives want a pat on the back for stating what most Americans already thought was true — companies have a responsibility to customers, employees, and the communities they work in. By negotiating a fair contract, one grounded in the respect and loyalty we deserve, AT&T has taken a first step toward backing up its talk with action. But it took 20,000 workers walking off the job to get us here.

American corporations like AT&T have spent decades putting higher shareholder value above all other goals for their companies. The consequences have been devastating for working families. The Business Roundtable executives say they are reassessing their priorities and considering the well-being of all stakeholders, including workers, not just shareholders.

Well, AT&T now faces another chance to back that talk with action: The corporate raider Elliott Management announced plans this week to extract profits from AT&T by eliminating jobs and sending work to low-wage contractors. If AT&T's board of directors stands by the Business Roundtable letter, it should reject Elliott Management's proposals.

Time will tell whether the Business Roundtable pledge holds up, but for the foreseeable future workers won't expect executives to do us any favors. AT&T employees, like GM workers and working people across the country, know the accountability we see in corporate America is the result of workers' long and hard fights for fair pay and standards in the workplace.

What the AT&T strike made clear is that America's corporations won't be held accountable unless workers are willing to put up a fight.

[Richard Honeycutt is the vice president for District 3 of the Communications Workers of America.]