DHS says it marks the end of “catch and release.” 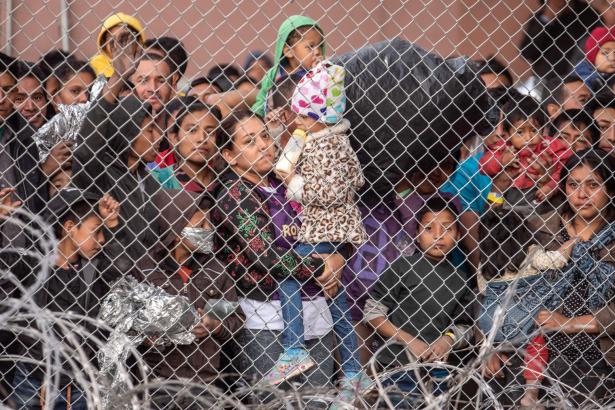 Migrant families are gathered inside the fence of a makeshift detention center in El Paso, Texas, on March 27, 2019., Sergio Flores for the Washington Post via Getty Images

Starting next week, the Trump administration will begin sending most immigrant families arrested along the southern border back to Mexico to await their immigration court hearings. This policy is being presented as an alternative to detaining asylum seekers indefinitely but it raises concerns about the safety of the people involved.

The policy change signals a significant expansion of the administration’s program requiring immigrants who fear persecution and are claiming asylum to wait in Mexico until their cases can be heard. (Families that don’t claim fear of persecution will be deported.) As of September 1, the Trump administration has sent more than 42,000 migrants back to Mexico to await decisions on their asylum claims — but almost 458,000 families have been arrested at the border between October 2018 and August 2019 as unprecedented numbers of families flee rampant crime, violence, and corruption in Central America.

Acting DHS Secretary Kevin McAleenan touted the policy change as the end of “catch and release” at a Council of Foreign Relations event Monday, referring to a concept that has been prevalent in the immigration debate for years but whose meaning has changed over time.

As Dara Lind explained it for Vox, “This White House tends to use it as … a catchall term for any law or policy that prevents the federal government from keeping every single immigrant apprehended without papers at the US-Mexico border from being processed (and, they’d prefer, deported) as quickly as possible, and being kept in immigration detention in the meantime.”

Trump has repeatedly claimed that catch and release allows immigrants to evade their court dates and remain in the US without authorization. But most immigrants do, in fact, show up for their court dates. Immigration judges ordered immigrants deported when they failed to appear in immigration court in about 25 percent of cases in fiscal year 2018, similar to rates over the previous five years.

The Trump administration has argued that keeping immigrants in detention while they undergo court proceedings is the only way to ensure that they show up for their court hearings. It consequently introduced a “zero tolerance” policy last year under which it has sought to detain all immigrants who cross the border without authorization — a policy whose consequence was the widespread separation of families.

But McAleenan said Monday that his agency has not been able to detain families longer than 21 days under a decades-old federal court order known as the Flores Settlement Agreement. That agreement established baseline standards of care for immigrant children in detention, including a limit on how long they can remain in adult detention facilities that are not licensed by the state to administer services to children.

The Trump administration has introduced a rule trying to vacate Flores, but immigrant advocates have asked a federal judge in California to block the rule from going into effect in October. McAleenan said that if the rule is upheld in court the administration will no longer be forced to release families after the 21-day detention limit and could instead hold them in detention.

“After the Flores regulations are finally adjudicated and put in place, that time limit will be alleviated and it will be [another] option for managing cases,” he said. “We will hold them together in an appropriate setting through their immigration proceeding.”

In the meantime, requiring families to wait in Mexico serves as a way to “keep families together and not in custody,” he said.

Returning families to Mexico en masse raises its own concerns.

Recent reports have shown that migrants sent back to Mexico under the policy have been robbed, kidnapped for ransom, raped, tortured, and killed. The State Department, meanwhile, has issued travel warnings for US citizens traveling through areas along the border where migrants tend to wait.

Mexico does have established procedures for processing asylum seekers. It does not, however, have the resources to process immigrants in the numbers that are currently arriving, given that its refugee commission has only 48 staff members nationwide.

Mexico also lacks the capacity to offer humanitarian aid to masses of immigrants. Asylum seekers waiting for decisions on their asylum applications in Mexico have recently faced overcrowded shelters, slim employment prospects, and difficulty finding lawyers, without which their asylum cases are almost surely doomed to fail.

Aaron Reichlin-Melnick, a policy analyst at the American Immigration Council, said in an interview that he’s not sure the US even has the means of sending families back to Mexico in the numbers that are currently showing up at the southern border.

He said the US has been returning migrants to Mexico under MPP at a rate of about 3,000 per week, which would not even begin to cover the more than 25,000 families that were arrested at the southern border in August. He said it’s possible that CBP arrested fewer families in September, continuing a downward trend that has lasted since June, which might make that more feasible.

The policy also does not account for the rise in Mexican families arriving at the border who cannot be returned to Mexico under the terms of MPP, Reichlin-Melnick said. More than 4,300 Mexican families have been arrested at the southern border this fiscal year as of August — almost double those from last year. It’s not clear whether they will continue to be detained in the US.

“Once again, the Secretary is refusing to engage with the facts on the ground and is repeating these high-level talking points without acknowledging the harm that MPP is causing to people across the border,” Reichlin-Melnick said.