There’s a new member of the Trump administration. His name is Eugene Scalia, and he’s now the US labor secretary. US labor leaders are worried that he will work hard to undo worker protections put in place under the Obama administration. 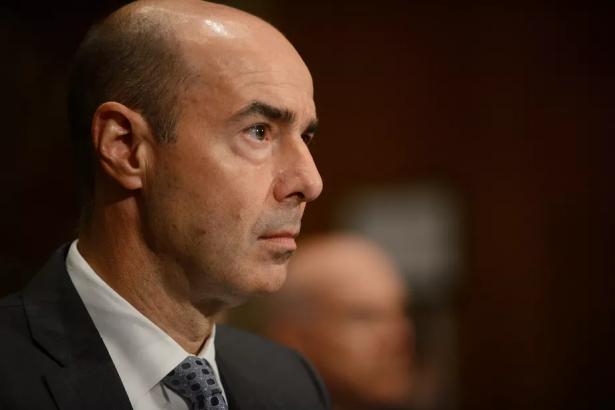 Eugene Scalia attends his confirmation hearing in front of the the US Senate Committee on Health, Education, Labor, and Pensions on September 19, 2019 in Washington, DC. , Astrid Riecken/Getty Images

There’s a new member of the Trump administration. His name is Eugene Scalia, and he’s the now the US labor secretary. He’s also the son of the late Supreme Court Justice Antonin Scalia, known for his hard-line views against abortion and affirmative action.

The Senate confirmed the 56-year-old lawyer Thursday for the role, which puts him in charge of enforcing workers rights and US labor laws. That includes laws meant to protect workers from unsafe workplaces, wage theft, overtime violations, and employee misclassification.

However, like many people Trump nominates to head federal departments, Scalia doesn’t have a great track record of fighting for the people or institutions he’s supposed to protect — which in this case is workers.

Democrats and labor leaders have been protesting Scalia’s nomination to the top labor role ever since former Labor Secretary Alexander Acosta resigned in July. Acosta was pressured to step down following scrutiny of how he handled a sex crimes case involving the financier Jeffrey Epstein, back when Acosta was a federal prosecutor in Florida.

Though Acosta was hardly a workers’ champion, US labor leaders are worried that Scalia will work even harder to undo worker protections put in place under the Obama administration.

Richard Trumka, president of the AFL-CIO union federation, said Thursday that Scalia’s nomination was “insulting, it’s dangerous, and workers are not going to forget it.” He also warned that the move would hurt Trump in the 2020 elections.

Scalia, for his part, promised senators during his confirmation hearing that he will look out for workers, and that his experience defending corporations has nothing to do with how he will enforce labor laws. Whether or not that’s true will be clear after he moves into his new office at the Labor Department.

In the meantime, here are five things to know about the new labor secretary.

Scalia has spent the past 20 years working as a high-profile lawyer in the Washington office of Gibson, Dunn, and Crutcher, a prominent corporate law firm. His legal record involves fighting labor laws on behalf of America’s largest businesses, including Wall Street banks, Walmart, and SeaWorld.

Back in 2006, he helped Walmart and other corporations win a lawsuit against the state of Maryland, which would have required large companies to contribute to their employees’ health care plans or to Medicaid.

In 2011, he championed Boeing’s threats to move jobs to a so-called “right-to-work” state during contract negotiations with a labor union. Right-to-work laws weaken labor unions because they let workers at unionized workplaces opt out of paying union fees.

Scalia also defended UPS against widespread discrimination claims, killing a major class action lawsuit filed under the Americans with Disabilities Act, according to the AFL-CIO. He also represented now-disgraced casino mogul Steve Wynn when he was accused of stealing tips from his Las Vegas employees.

In one of his most notable cases, Scalia argued that SeaWorld had no responsibility for the violent death of one of its orca trainers, choosing instead to blame the victim.

2) Scalia has a gift for unraveling consumer and worker protections

Scalia has earned a reputation in legal circles as an aggressive litigator against government rules. In 2012, the Wall Street Journal described him as “one of the industry’s go-to guys for challenging financial regulations.”

Scalia played a central role in getting a federal judge to overturn the Obama Labor Department’s fiduciary rule, which required financial advisers to consider only the best interests of their client when providing retirement advice, regardless of commissions or fees. His client in both the fiduciary rule fight and campaign finance reform efforts was the US Chamber of Commerce.

Scalia also sued the government repeatedly on behalf of big banks to unravel Dodd–Frank consumer protections after the Great Recession.

Scalia is probably best known for his campaign against the Clinton-era ergonomics rule.

As a lawyer, he often dismissed the science linking repetitive motion and physical injuries suffered by workers, writing in a Cato Institute report that disorders such as carpal tunnel syndrome are supposedly caused by typing but that “ergonomists cannot establish in any given case whether an ailment was caused by work or by genetic factors or other activities, such as sports.”

Scalia argued in a series of writings and public comments in 2001 that the rule was too vague and would result in the agency becoming overreaching and intrusive.

He had a cynical view of the role of labor unions played in crafting the ergonomics rule, writing in a 2000 Wall Street Journal op-ed “that ergonomic regulation will force companies to give more rest periods, slow the pace of work and then hire more workers (read: dues-paying members) to maintain current levels of production.” The rule was overturned in 2001 in Congress.

Scalia is a member of the Federalist Society, just like his father was. The conservative legal group has amassed enormous influence within the Trump administration. The organization has recommended countless judicial appointees to the president and then played a key role in their confirmations. The group was very involved in the confirmation process of Supreme Court nominees Brett Kavanaugh and Neil Gorsuch. Many Democrats view the Federalist Society as a right-wing, corporate-friendly organization determined to undermine the federal government.

The Federalist Society “understands the fundamental power through the federal judiciary, to rig the system in favor of special interests,” said Sen. Sheldon Whitehouse (D-RI) during a speech in May.

Scalia’s membership in the group suggests he would continue fighting for corporate interests as head of the Department of Labor.

5) He’s done one or two good things for workers

During his confirmation hearing this month, according to the Washington Post, Scalia argued that he also has a record of advocating for workers. He pointed out that during a brief stint as the Department of Labor’s chief lawyer during the George W. Bush administration, he fought for a group of poultry workers who were not paid for the time they spent putting on their safety gear before work.

He also said during the hearing that it is “fundamental” for workers to have the choice to join a labor union, and said he believed that labor unions were “among the most effective advocates you will see for workplace safety and health.”

“I’ve written that there are some workplaces where the best thing you could have for achieving the best terms and conditions of employment will be a labor union,” Scalia said during the hearing, according to the Post. “They play an important role.”

Correction: A previous version of this article misstated Sen. Sheldon Whitehouse’s constituency. He represents the state of Rhode Island.