Victims Left Behind in US Agent Orange Cleanup Efforts

Vietnamese victims have yet to receive compensation – and many live in desperate poverty. 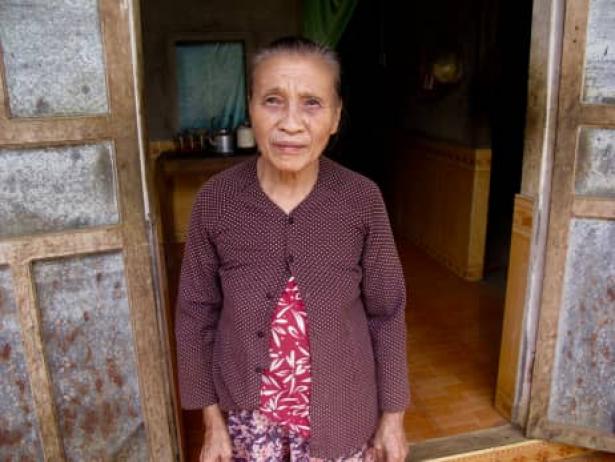 Le Thi Mit isn’t sure what caused the severe physical and cognitive disabilities of her three youngest sons, who were born in the wake of the “American War.” She doesn’t know what caused the uncannily similar conditions of the children of her closest neighbor, either. But she remembers watching U.S. planes spraying clouds of white defoliant and red napalm over the forest near her property in Vietnam’s Quang Tri province, and she clearly recalls the destruction that came in their wake.

Two of Mit’s sons have already passed away, but Mit and her husband, Loc, continue to provide round-the-clock care for their youngest son, Truong, who cannot speak, walk, or feed himself. Mit and Loc provide the best care they can for Truong, who is now 30, but are constrained by poverty and old age – both are now in their 70s, and the family struggles to subsist on the $75 they receive each month in benefits from the Vietnamese government. They live in a simple rural home with a leaky roof and worry about the coming rainy season. But mostly, they worry about Truong. After they pass away, Mit asks, who will care for him? 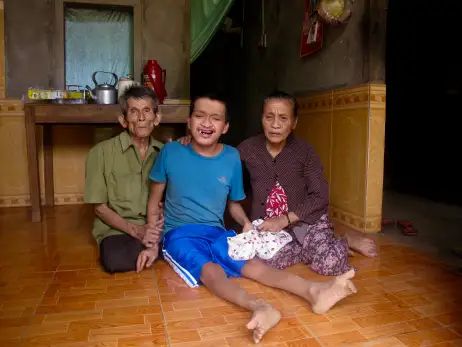 Mit and Loc are hardly alone. Many parents who gave birth to children with severe disabilities after wartime exposure to Agent Orange are now in their 70s and 80s and worry about the fate of their dependent adult children. While many Vietnamese provinces have live-in care centers, most centers are severely strapped for funding, and some have shuttered or provide only daytime services. Mothers like Mit are forced to hold on to a morbid hope: Outliving their own children.

In recent years, the United States has increased its support for environmental cleanup in Vietnam, without going as far as to admit outright responsibility. In April 2019, nine U.S. senators flew to Bien Hoa in southern Vietnam to inaugurate the cleanup of nearly 500,000 cubic meters of contaminated soil and sediment at a former U.S. airbase. The United States has committed $300 million over the next 10 years to the project. Bien Hoa is the largest remaining dioxin hotspot in Vietnam, and the United States’ significant financial commitment to cleaning it up represents a high-water mark in U.S.-Vietnam collaboration on war legacy issues. And yet, while many herald U.S. support for the Bien Hoa remediation project as hard-won progress, others feel that the human victims of Agent Orange have been left behind.

The United States provides $10 million annually to support persons with disabilities in provinces heavily sprayed with Agent Orange during the war. But none of this money goes directly to families, and many Vietnamese observers see the $10 million as insufficient from a humanitarian and moral standpoint.

Ngo Xuan Hien, who works at Project Renew, an NGO active in addressing war legacy issues in Quang Tri province, worries about the impact this economic stress has on all parties. Without increased home-based interventions to ease the burden of aging caretakers, he said, people like Mit and Loc likely won’t live much longer. Hien is glad that the United States is increasing its commitment to environmental remediation but thinks that the government should focus seriously on the human impact of Agent Orange as well. “Okay, clean up the hotspot – keep going,” he said. “But people like Truong and his mom should be taken care of, too.”

It’s difficult to say with certainty that the disabilities of Mit’s three children were caused by Agent Orange – Mit herself said she can’t be sure. But the area around her home in Quang Tri was heavily sprayed with Agent Orange during the war, and local inhabitants were thus exposed to dioxin, a chemical linked to cancer in those directly exposed and deformities and disabilities in subsequent generations. Dioxin is often referred to as “the most toxic chemical known to man” because of the molecule’s capacity to provoke catastrophic harm in infinitesimally small concentrations. In high doses, dioxin produces immediate death. In lower doses, it can provoke cancer, diabetes, and other health conditions in those directly exposed and disability, deformity, and death in their children – and their children’s children.

In the 1990s, Dr. Nguyen Viet Nhan, then a PhD researcher, identified a cluster of families with multiple children with birth defects in Cam Lo district, where Mit lives. Yet while Nhan’s research found that families in certain provinces heavily sprayed by Agent Orange had a higher rate of birth defects than families in provinces less heavily sprayed, Nhan is now quick to highlight the limitations of his study. While Nhan couldn’t help thinking at the time that Agent Orange was perhaps responsible for the patterns of birth defects, he analogizes his uncertainty to the victim of a robbery who has an idea of who the thief might be, but no evidence. Putative Agent Orange victims, he said, are stuck in the realm of “maybe.”

Nhan noted that there haven’t been enough comprehensive epidemiological studies in Vietnam, which complicates efforts to muster evidence in support of the claims of Vietnamese Agent Orange victims. The United States government continues to maintain that individual Agent Orange victims cannot prove their cancers or disabilities were caused by Agent Orange. And yet the U.S. Department of Veterans Affairs has disbursed billions of dollars in disability compensation and benefits to U.S. veterans of the Vietnam War who manifest certain health conditions associated with Agent Orange exposure, including diabetes and certain cancers.

Nhan favors a purely humanitarian approach and thinks that a fixation on fault and causation is ultimately unproductive and harmful to victims. But Nhan acknowledges that the scientific evidence that supports U.S. compensation to American veterans should also apply to Vietnamese victims. “We’re all human beings,” he said. “What happened to the Americans will happen to Vietnamese people too.” The proportionate effects on the Vietnamese, he added, would likely be more significant given that local populations were exposed to Agent Orange over more prolonged periods of time than U.S. servicemembers.

Vietnamese victims and advocates are keenly aware of what they perceive as an unfair double standard in U.S. attitudes toward causation and responsibility with respect to American and Vietnamese dioxin victims. Le Van Dang, the head of the Vietnam Association for Victims of Agent Orange/Dioxin (VAVA) chapter in Quang Tri province, is frustrated by the lack of compensation and support for Vietnamese victims. The fact that the United States has yet to compensate victims is “unfair to the people who suffer from disabilities caused by Agent Orange in Vietnam,” he said. “We are well aware that American soldiers who served in Vietnam are already receiving compensation,” he added.

Recent jury awards of hundreds of millions of dollars to Americans who claim that Monsanto’s Roundup – a backyard herbicide – caused their cancer have amplified Vietnamese frustration with the differential treatment of the claims of American and Vietnamese victims. Roundup is composed of a different chemical mixture than Agent Orange, and U.S. judges have stepped in to reduce the amount owed by Bayer AG, which acquired Monsanto in 2018. But Vietnamese observers have taken note of recent largely symbolic verdicts against Monsanto with some bitterness. Fifteen years ago, a U.S. federal judge dismissed claims that Vietnamese Agent Orange victims brought against Monsanto and the other companies that produced Agent Orange before Vietnamese victims were able to make their case before a jury.

Madam Ton Nu Thi Ninh, a career diplomat who served in Vietnam’s National Assembly, said that the fact that U.S. courts would award over a hundred million to a few Americans but “not even look at the hundreds of thousands of Vietnamese” with somewhat similar claims, is a “stark reality we need to acknowledge.”

Pham Truong, the director of VAVA’s international relations department, highlighted the insufficiency of current U.S. support for people with disabilities in provinces sprayed with Agent Orange by invoking recent Roundup awards. “Each person who brings suit can recover $80 million,” he estimated, referencing the reduced amount a California judge awarded an American groundskeeper with terminal cancer. “Meanwhile there is how much for Vietnamese victims? $10 million a year—for 3 million Vietnamese affected.”

For countless families like Mit’s, funding from the United States government isn’t just a matter of justice or fairness – it’s an urgent humanitarian need. The Vietnamese government provides payments to approximately half a million families affected by Agent Orange, but these monthly stipends, which max out at $150 for veterans of the war and about half that amount for civilians, aren’t enough to cover basic expenses – let alone provide for a dignified lifestyle. Mit and her husband supplement the money they receive from the government by growing green tea and black pepper. But even so, they struggle to earn the $200 a month that they need in order to meet their most basic needs. Despite their age, Mit and Loc continue to work nearly round the clock as caretakers and breadwinners.

The coming rainy season will only exacerbate the troubles of impoverished families struggling to cope with care for disabled children. Mit’s roof already leaks, and Loc noted that it might not hold up in a typhoon. Hoang Thi Thê, another caretaker I met in Central Vietnam, urged me to publish something quickly. Thê’s late husband was exposed to Agent Orange while serving in Quang Tri province during the war, and Thê continues to care for their 42-year-old daughter Nga, who can move and speak only with great difficulty. Thê receives money from the government, but it’s barely enough to cover food. Thê can’t afford electricity and told me that her home, which is dark and damp, will almost certainly flood knee-high during the coming rains. At 81, she’s not sure how much longer she can hold on.

Sonya Schoenberger is a JD Candidate at Yale Law School and a PhD student in history at Stanford University. Her reporting in Vietnam was supported by a grant from the Council on Southeast Asia Studies at Yale.