The Arkansas State Board of Education busted the Little Rock Education Association, the teacher’s union for the district, voting not to renew the contract, effectively ending the bargaining power for the union. 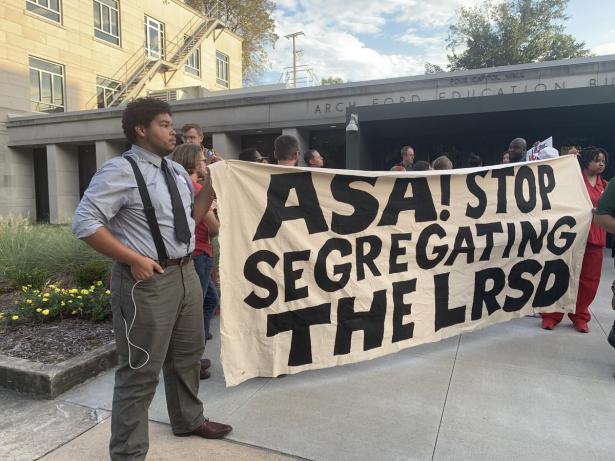 Attendees of the Arkansas State Board of Education hold up a sign protesting the previously approved framework for the Little Rock School District,CREDIT SARAH KELLOGG - KUAR NEWS / KUAR

The Arkansas State Board of Education has unanimously passed a motion to place the Little Rock School District back under local control after an eight-hour meeting that ended in anger for many attendees.

The vote came after the state board previously approved a framework that would have returned LRSD schools with a "D" rating or above back to local control, while retaining control of schools with an "F" rating. That plan received criticism and comparisons to segregation in part due to a majority of schools with the "F" rating are located in areas with majority minority populations. Thousands of people gathered Wednesday night at Central High School in protest of that framework.

Board member Chad Pekron brought the motion to the board. He said since there is not a large difference between the "Every Student Succeeds Act" or ESSA scores of "D" and "F" rated schools, he saw two options moving forward: to add "D" rated schools under state control as well, or to remove the framework altogether and return the entire district back to local control.

"I don’t think we can accomplish what we want to for students as long as this is going on. It’s us versus you, and that’s not gonna help the students," Pekron said.

Over 30 people spoke on the matter during the public comment period on Thursday’s meeting. However, many had to revise what they were initially going to say, because Pekron had already made a motion to restore the entire district back to local control.

Natalie Willis was among those who spoke in favor of the new motion. During a break in the meeting, she said she was cautiously optimistic of the district returning to local control.

"I agree with his proposal. Now, after one of the ladies spoke, that we need to know all the details completely as to what he’s saying. But from what he said, I’m hoping that it’s going to be just what God would have it to be," Willis said.

The vote was received by cheers, but the tone quickly changed to one of confusion and anger. Another item on Thursday’s agenda concerned whether to continue recognizing the Little Rock Education Association, the teacher’s union for the district.

Since the school district is still currently under state control, Pekron motioned for the decision to go to Arkansas Education Commissioner Johnny Key, who acts as the school board. Pekron eventually rescinded that motion after attendees complained they did not have the opportunity to speak on it. However, the board voted not to renew the contract anyway, effectively ending the bargaining power for the union.

Kacky Fuller is LRSD parent. She says she feels confused and upset by the actions of the board, especially since some of them do not live in the Little Rock area.

"I’m floored that I’m a taxpayer and I have literally no decision making. None. I’m supposedly a stake holder that doesn’t matter," Fuller said.

The LREA released a statement following the meeting stating, "We will continue to fight for a voice for educators in how students are educated, be it in contract negotiations or in whatever forum decision makers choose."

The board also passed a motion for the hiring of an outside party to help with the eventual establishment of a personnel policy committee for the LRSD.