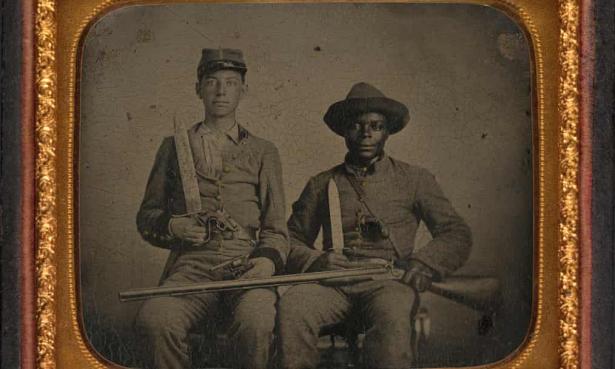 Arlington National Cemetery is the hallowed resting place of America’s war dead. It is also home to a Confederate memorial with a frieze depicting a “mammy” – the stereotype of a black woman loyal to a white family – and an African American man wearing Confederate uniform.

“For many people, that is evidence of black Confederate soldiers,” Kevin Levin told an audience at the National Archives in Washington last month. “But it’s not. In fact, no one was confused during the dedication that this was in fact a body servant.”

In other words, an enslaved man.

The American civil war has never been in short supply of myths, but Levin describes black Confederates as the “most persistent”. Hundreds of articles, organisations and websites rewrite history by asserting that between 500 and 100,000 free and enslaved African Americans volunteered as soldiers in an army fighting to preserve slavery.

Just because it is counterintuitive does not make it true. In the wake of Donald Trump’s election and the white nationalist protest in Charlottesville, Virginia, where a statue of the Confederate general Robert E Lee still stands, the issue resonates beyond the halls of academia.

Levin, a historian, educator and author of the blog civil war memory, has been writing on the subject since 2008.

“One of the things that I’m fascinated by is the extent to which Americans still struggle over coming to terms with the core issues of the civil war and reconstruction, and that is slavery and the issue of race,” he says by phone from Boston.

“This is, it seems to me, the perfect case study through which to track that memory of the war, whether it’s a matter of erasing slavery from the landscape of memory or mythologising, which I think the black Confederate narrative, at least in the last few decades, is really just a perfect example of.”

Levin’s new book, Searching for Black Confederates: The Civil War’s Most Persistent Myth, argues that slavery was central to the south’s war effort. Drawing on research including letters, diary entries and newspaper editorials, it demolishes the notion that the Confederacy embraced black men as soldiers from the beginning of the war.

After war broke out in 1861, thousands of enslaved men were forced to accompany their masters into the army as body servants or camp slaves.

“It’s absolutely important to think of these enslaved men as the cornerstone or foundation of any Confederate army because it’s their presence, it’s the roles that they’re playing, that make camping, marching and conducting battles even possible,” Levin says.

Life in the camps could be harsh. Levin “found a couple of cases where the punishments are brutal. One Confederate officer wrote home to his wife in vivid detail about stretching out his camp slave and laying on 400 lashes. The kinds of punishments that you would have found back home on the plantation, you would have found all of that present in the army.

“It may have even been heightened because you have to remember most of these men who bring camp slaves are officers, so they have to constantly demonstrate their rank.”

When the war ended, enslaved African Americans serving the Confederate army were liberated. But by the end of the 19th century, they began to play a central role in the lost cause, a narrative white southerners developed as a way to rationalise and romanticise defeat. 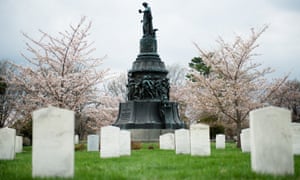 Levin explains: “They argue that the war was never about slavery, that their cause remained just even though they were defeated. What was central to the lost cause was that they believed and maintained that their enslaved people remain loyal to them and the Confederacy until the very end.

“So when it came time, for example, for Confederate veterans to start meeting in large reunion gatherings, it wasn’t uncommon for these former camp slaves to attend as well. They have any number of reasons for attending: I suspect some of them are able to make a little money by entertaining these large white crowds. Some of them, perhaps, wanted to maintain old ties with their owners or the people in their respective units who are now leaders in their respective communities and so it’s a way to maintain their own status back home.

“But for white southerners and former Confederates these former camp slaves are hugely important symbolically because they symbolise the racial status quo of the antebellum period.

“These are men who now can be pointed to as the models of proper behaviour for African Americans during the Jim Crow era, so at a time when there’s a great deal of racial unrest throughout the south and there’s a new generation of African Americans who are pushing for equal rights, white southerners can point to these elderly men and say, ‘This is how you should behave.’”

Photographs helped fuel the false narrative. The most important, taken in 1861, shows Sgt Andrew Chandler of the 44th Mississippi Infantry Regiment sitting beside Silas Chandler, a family slave. Both are in uniform, clutching pistols, knives and a shotgun. It has been interpreted as an image of comradeship. Levin, however, sees the master-slave relationship.

The spread of the myth also went hand in hand with the raising of Confederate monuments and statues, some of which have been torn down. Levin, who taught in Charlottesville for 11 years, says: “It provides the narrative for those monuments, especially the monuments that explicitly or specifically address the role of African Americans during the war. There were a number of monuments that honoured the former camp slaves.”

William Faulkner’s oft-quoted observation, “The past is never dead. It’s not even past”, could have been written in the blood of the civil war, which continues to stain America. Last month Trump, who has been cheered by white supremacists, tweeted a warning about a “civil war-like fracture” if he is impeached and removed from office.

Among the stars of what Levin calls the Confederate heritage movement is HK Edgerton, an African American who marches in Confederate uniform and waves the Confederate flag at gatherings of the Sons of Confederate Veterans. According to Levin, Edgerton has expressed a desire to remember a time when race relations were less divisive.

He is living proof that the black Confederate myth persists, especially among white conservatives.

Levin reflects: “I think they embrace this myth because it’s an easy way of pushing aside or minimising the racial divide today. So, if you don’t want to deal with racism today and white supremacy today, what you do is you embrace a historical narrative that minimises it in the past. What that does is sort of gives you cover and reinforces your own view of the present.”

Those looking for further reinforcement will find it at Arlington cemetery, beneath Lee’s mansion, in the depiction of a “mammy” taking a child from a southern soldier on the memorial dedicated in 1914 by the United Daughters of the Confederacy.

“I bring teachers there every summer and they’re all horrified,” Levin says. “Anyone who goes there is just like, ‘What is this doing here?!’”