"This brief but effective book, only about 100 pages in main text," writes reviewer Meulbroek, claims "that decollectivization laid the basis for China’s capitalist restoration." 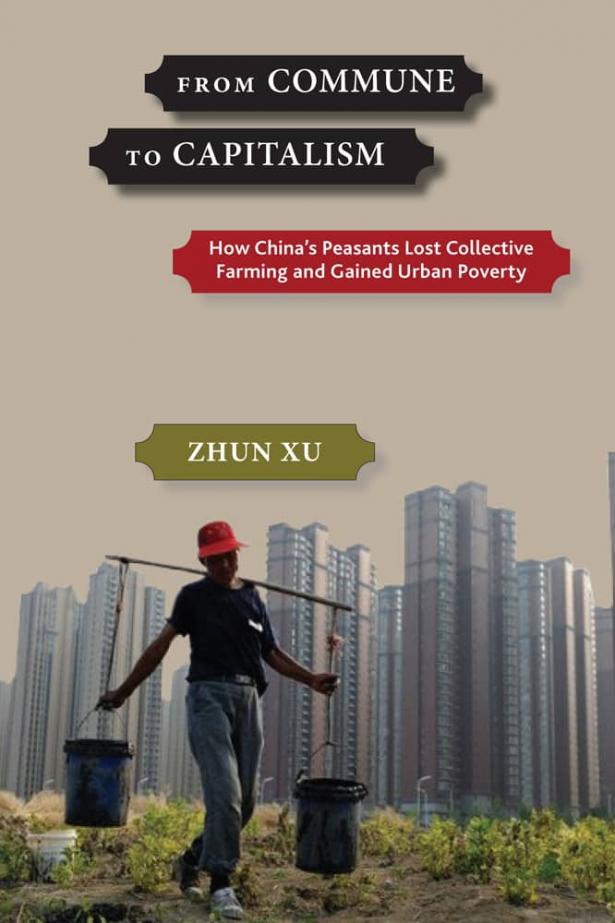 Mainstream economists have ushered praise of the demise of China’s agricultural collectives. The classic argument is that, by allowing production beyond the reduced quota to be sold for a profit (through the Household Responsibility System or HRS), the Communist Party of China (CCP) was able to engineer a relatively successful ‘transition’ to a market-oriented economy without dismantling the quota – that is, state appropriation of production – itself. Narratives like these dovetail nicely with the common Western conception that collectivization was an ‘unmitigated disaster’ advanced by a purportedly murderous tyrant. What is remarkable about China’s agrarian reforms is that, despite their pivotal role in ending socialist production, some on the left have offered quite positive evaluations. No less a critical scholar than Giovanni Arrighi, for instance, claimed that China’s agricultural reform and the subsequent formation of township and village enterprises constituted a paradigmatic instance of ‘accumulation without dispossession’, and that this approach harbors the seeds for China’s other-than-capitalist future.

Zhun Xu is a skeptic of these accounts. This brief but effective book, only about 100 pages in main text, claims instead that decollectivization laid the basis for China’s capitalist restoration through two primary mechanisms. First, Xu claims that agrarian reform was not an instinctive action undertaken by peasants frustrated with their economic conditions, but was a political project advanced by pro-capitalist factions in the CCP following the death of Mao Zedong. The disassembly of the collectives broke the peasant-worker alliance that formed the basis of China’s social contract. Second, by destroying the material basis for peasant solidarity, decollectivization was also a process of depoliticization that reduced the potential for resistance to further economic reform. Xu criticizes those who project idealized visions of spontaneous order and Pareto efficiency onto China’s agrarian transformation.

Xu employs a range of methods – social-historical analysis, methodological critique of existing research on Chinese agrarian change, and interviews –  to make his argument. His first analytical chapter attempts to situate China’s decollectivization project in its social and historical context. His investigation rests on three logical categories that demarcate contending agrarian political dispositions: pro-capitalists, socialists, and populists. Xu traces China’s initial collectivization experiments in the early 1950s and the intra-party political disagreements that followed. Pro-capitalists, including Liu Shaoqi, pushed for the reintroduction of capitalist agriculture, under the stagist belief that it was necessary to establish the conditions for socialism in the future; populists, such as Deng Zihui, pushed for the petty-producer solutions that sheltered family farming from the bare compulsions of the market. Mao, however, argued that collectivization would increase peasant purchasing power and help stimulate demand for domestic industrial products, as well as help avoid a reversion to capitalist or feudal social relations. While the socialist route was pursued during the chairmanship of Mao, the pro-capitalist and populist factions did not simply wither away. Despite the many successes of collectivization – including rapid dissemination of new technologies and vastly improved public health provision – a new capitalist-populist alliance continued to coalesce within both CCP leadership and the increasingly conservative bureaucracy.

Mao Zedong’s death in 1976 presented an opportunity for this burgeoning alliance to undo the collective project, and Xu states that is precisely what happened. After the initial campaign, however, the compromise has become somewhat more volatile, with populist factions urging for social policy to mediate the effects of brash marketization, while pro-capitalist factions continue to advocate for more intensified land use and rural land privatization. While neither have been fully successful, Xu claims, the space for resolving these tensions is firmly set within boundaries amenable to capitalist accumulation. The socialist alternative is all but exterminated.

Chapter 3 deconstructs the claim that decollectivization resulted in greater efficiency within the Chinese agricultural sector. Xu analyzes the empirical data on the conditions of agricultural production during the 1970s and 1980s, noting that while output did indeed increase during China’s transition period, the pace of growth slowed significantly after the completion of agricultural reforms in 1984. Furthermore, the conditions for China’s agricultural expansion, such as the import of fertilizer inputs, the construction of reservoirs, the mechanization of farm equipment, and the spread of improved seeds, were fulfilled during the collective era. The HRS, by contrast, was marked by less labor intensity and moderation of growth in machinery use.

Central to this chapter is his deconstruction and criticism of Justin Lin’s claim that the implementation of the HRS was the primary causal force catalyzing China’s significant growth in agricultural output and productivity. Lin, a former chief economist of the World Bank and proponent of ‘new structuralist economics’, has been among the most cited in mainstream analysis of decollectivization. Xu notes a few problems with Lin’s approach. First, Lin employs ratios based on annual data on adoption of the HRS; however, farming is a seasonal endeavor. If collectives that experienced growth in output and productivity adopted the HRS system in October, after the harvest, Lin’s model will attribute that growth entirely to HRS; the opposite will be the case for HRS adoptions in, say, April. The second problem is that Lin relies on price indices that do not capture changes in profitability and incentives. Adjustments to quota procurements, in this era, had the effect of increasing profit margins for peasant farmers and allowed them to invest in fertilizer and machine power, but this was not due to decollectivization per se. The third problem is that Lin overlooks important exogenous factors, such as weather conditions, which make a significant impact on yearly agricultural output. Xu concludes that institutional conditions in place prior to reform had a major, if overlooked, impact on China’s post-1978 agricultural output and productivity boom.

Chapter 4 explores the impact of decollectivization on China’s social structure. The foil to Xu’s argument in this chapter is the claim that decollectivization was an act of resistance to free-riding brought on by peasants themselves, in opposition to the rigid, dogmatic and corrupt cadre. In its stead, he presents evidence from local records that decollectivization was realized through active state initiatives. By the end of Mao’s chairmanship, political factions composed of intellectuals, cadre, military officials captured state power, represented by the ascendance of Deng Xiaoping. The political shift of the Chinese Communist Party, Xu argues, reflected the seizure of power by the state bureaucracy as a class, who quickly repositioned themselves as pursuing ‘modernization’ of the countryside, and then undertook coercive measures to reinforce their decisions. Cadre personnel changes and direct deployment of work teams were in order for provinces that remained committed to the collective project. While a number of peasants resisted decollectivization, as Xu points out, a sizeable proportion of the cadre stood to profit from it.

Overall, decollectivization neutralized the peasantry as a political force by destroying their material bonds with each other, creating a new, individualized urban proletariat that would fuel China’s industrial transformation in the 1980s through today. This is an excellent alternative account of gradualism that mainstream economics lauds as China’s unique approach to reform. Rather than representing an allegedly seamless transition to market relations, Xu’s account shows that this was a political strategy that had the effect of ensuring a swift process of primitive accumulation.

Chapter 5, the concluding chapter, draws on interviews with peasants and local officials as well as local records in Songzi County, and explores the contradictions within the collectives. Against those that claim that socialist production inevitably results in shirking, Xu claims that the work-point system, which incentivized more difficult tasks, was fairly successful. Efficiency differed from collective to collective, but what Xu finds is that where more stratified and exploitative cadre-worker relations were found, effort was likely to diminish. Thus, not socialism itself, but hierarchical managerial relations overseeing socialized production are to blame for inefficiency. Xu concludes socialist production ‘naturally requires’ (94) socialist politics to be successful.

There are some methodological limitations to Zhun Xu’s otherwise strong study. First, likely due to the opaque nature of the Chinese state, Xu tends to resort to explanations of intra-party dynamics that relies on a few statements of select individuals. By doing so, it seems Xu risks moving from abstract categories to concrete individuals too quickly. We get the impression that there were only three possibilities of Chinese agrarian development – populist, capitalist, or socialist – and that these were squarely represented by three individuals in a non-contradictory way, though everyone acquiesced when Mao made up his mind. How did these factions enroll supporters to come to believe what they believed? What were the material interests and key motivations behind them, and did they change over time? Perhaps some concession of the limitations of the taxonomy offered here might have been in order.

Second, while Xu urges us to take the Chinese case in world-historical context, some connections between land reforms in decolonizing nations and those in China required more explanation. He briefly notes that Taiwan undertook land reforms at the demand of peasants, who clearly saw the Chinese path as a desirable model, and that Mao pointed to the Soviet experience as support for his agrarian agenda. And later pro-reformists pointed to U.S. and Europe as evidence for the superiority of ‘modernization’ (33). But what was the significance of China itself for, say, Africa and South Asia? If there was no significance, why mention them? Xu mentions how Chinese intellectuals represent Latin American peasant movements to suit their politics, but how China’s agrarian reform is held up as a model by IFIs and neoliberals now is left unquestioned.

These minor reservations notwithstanding, Xu’s class-based analysis of the Chinese state and its economic policy transformations should be required reading for scholars, students and activists interested in agrarian political economy and ‘the rise of China’. His combination of methods advances a convincing counter-narrative to celebratory accounts without at any point seeming too eclectic. Bringing a wealth of contradicting evidence to deconstruct celebratory narratives of China’s agrarian reform advanced by new structuralists, and neoliberals alike, Xu’s task now is to move from deconstruction to reconstruction. In doing so, Xu should expand on his claim that ‘the remarkable development of the socialist economy…built the conditions for the dramatic output growth’ (55). It would entail a class- and institution-sensitive analysis of agrarian change, within and beyond the CCP, in its variegated experiences in the provinces, and include a clear assessment of the possibilities of collective production in China’s now largely urban- and market-based social formation. As the Party increasingly aims to internationalize while ‘rejuvenating’ the Chinese nation, how a globalizing China approaches the remnants of the world’s peasant population will undoubtedly remain a critical issue for decades to come.

Chris Meulbroek is an M.A. student in the Department of Geography at the University of British Columbia. He is broadly interested in the geopolitical economy of development and economic policy formation in Greater China.