We Deserve a Better Medicare-for-All Debate

The debate over Medicare-for-All’s financing ignores the costs of the alternatives — and the status quo under Trump. 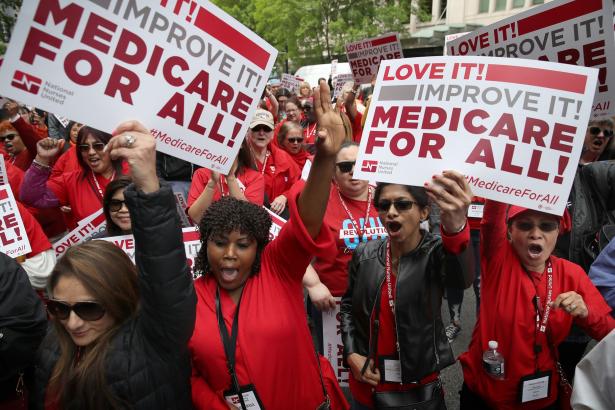 Protesters supporting “Medicare for All” hold a rally outside PhRMA headquarters April 29, 2019 in Washington, DC. The rally was held by the group Progressive Democrats of America., Win McNamee/Getty Images

The narrow debate over Medicare-for-all’s financing has become totally disconnected from the status quo aspiring reformers want to fix (the high costs of health care in America), and it totally ignores the toll of the Trump administration’s reckless agenda to pare back health coverage in this country.

But the debate rolls on. Sen. Elizabeth Warren said Sunday she would put out a plan to finance single-payer Medicare-for-all in the next few weeks. She had little choice. At last week’s debate, debate moderators and centrist candidates used the issue as a cudgel against the senator, who has risen to the top of the 2020 field.

We’ll see what she comes up with. And it’s certainly reasonable to ask a candidate to explain how they’d pay for a fundamental overhaul of the US health care system. Prominent economists certainly doubt everyone in the middle class would be a winner under Medicare-for-all.

It’s also hard to blame trailing center-left candidates for trying to contrast themselves with a frontrunner who is close in the polls with former Vice President Joe Biden. But they might be underselling the potential costs of their Medicare “for all who want it” alternative.

Jared Bernstein at the Center on Budget and Policy Priorities pointed out last week — and mind you, he himself supports a public option — the flaw in Biden’s and Mayor Pete Buttigieg’s critique of Medicare-for-all. By their own logic, the public plan should be appealing enough to attract consumers from private coverage, which means the costs for a public option will inevitably go up. (Buttigieg has called a public plan a “glide path” to single-payer.)

Yet nobody is asking how Biden or Buttigieg would pay for their plan over the longer term, if it does grow into a program that covers almost as many people as the Bernie Sanders’s version of Medicare-for-all.

That brings us to the bigger problem: Debate moderators have framed the question in such a way — would you raise taxes on the middle class? — that drains it of all relevant context, from the high costs of the existing system to the current trendlines we’re seeing under President Trump.

Warren and Sanders have answered that question by emphasizing that new federal taxes will be replacing private insurance premiums for employers and families and that out-of-pocket costs will be nearly eliminated. It’s hard to say whether they are right that middle-class families will pay less overall for health care without a detailed financing plan, but this RAND study of a proposed single-payer plan in New York state that’s very similar to Medicare-for-all would give the candidates a case.

The study shows an almost one-to-one trade of private premiums for new taxes, with point-of-care costs cut by more than half. Overall health care costs shrink slightly, with administrative costs way down and more money spent directly on medical services.

This is the pitch Warren and Sanders are making. But they aren’t making it against an empty slate. That’s the context debate moderators miss with their narrow focus on middle-class taxes.

Those trendlines explain why Americans continue to name health care costs as one of their top policy concerns, even with 90 percent of people covered by some kind of insurance. And they surely help explain why the political energy for another round of health care reform remains so intense less than 10 years after the Affordable Care Act became law.

These problems are only getting worse. The uninsured rate has ticked up again, after falling for most of the last decade, since the Trump administration took over. They have willfully undermined the viability of the ACA’s insurance markets and permitted work requirements for Medicaid, causing thousands of people to lose their insurance without any meaningful effect on employment.

But none of this — the very reasons we are talking about Medicare-for-all or Medicare-for-all-who-want-it — would be evident to a viewer who hears one of the 2020 candidates asked for the umpteenth time about middle-class tax hikes. Nobody is explaining to them, in setting up the question, the cost of the system as it exists today.

It has been left to the Medicare-for-all supporters to try to steer the conversation to the broader discussion of costs, but then they are assailed by moderators and moderates alike for being evasive.

Medicare-for-all faces plenty of challenges, political and practical. Its backers should be candid about the obstacles in front of them and the high degree of difficulty in overcoming them. The public option undoubtedly does have more support, for now, with the American public than single-payer does. Other countries have found a role for private insurance in their universal health care schemes; it is not necessarily a binary choice.

America needs an informed conversation about health care costs and how we can lower them so nobody in this country goes bankrupt because of a medical event. This myopic fixation on middle-class taxes is constraining our ability to have it.

This story appears in VoxCare, a newsletter from Vox on the latest twists and turns in America’s health care debate. Sign up to get VoxCare in your inbox along with more health care stats and news.