labor The Double Standard at Work: European Corporate Investment and Workers' Rights in the American South

In their home countries, European companies respect workers’ organizing and bargaining rights and commit themselves to international core labor standards. But they do not always live up to these global standards in their Southern U.S. operations. 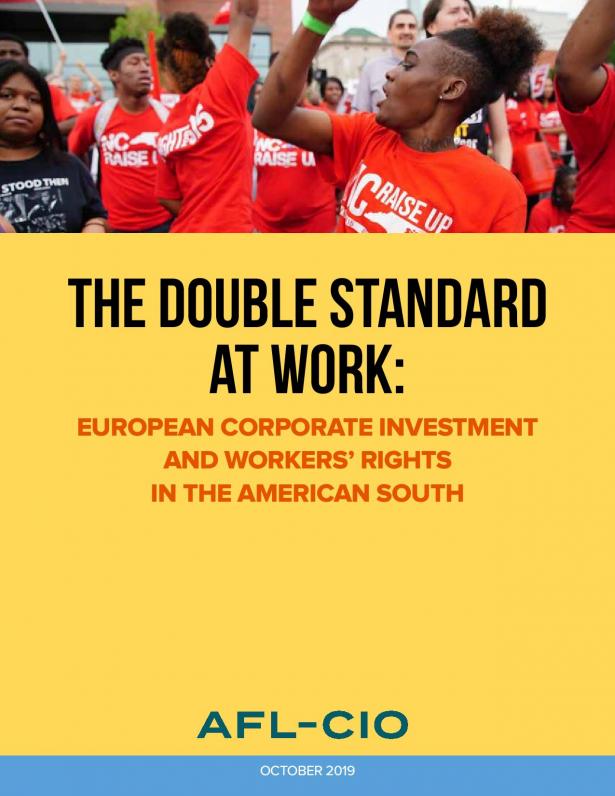 This report examines European companies’ choices on workers’ organizing rights with documented case studies in several American Southern states. In their home countries, European companies investing in the American South generally respect workers’ organizing and bargaining rights. They commit themselves to International Labor Organization core labor standards, Organization for Economic Co-operation and Development Guidelines, UN Guiding Principles, the UN Global Compact, and other international norms on freedom of association and collective bargaining. But they do not always live up to these global standards in their Southern U.S. operations.

When they apply harsh anti-union strategies and tactics, European firms often argue that they simply are following advice from local business leaders and elected officials to adapt to the corporate customs and culture of the American South...

European companies’ campaigns against workers’ freedom of association in the Southern United States have wider implications and effects beyond whether employees succeed in forming trade unions. When they apply harsh anti-union strategies and tactics, European firms often argue that they simply are following advice from local business leaders and elected officials to adapt to the corporate customs and culture of the American South—a “When in Rome, do as the Romans” ethos. But in so doing, they also are reinforcing and validating a dominant economic, social and political model that has locked the South into the bottom tier among American states under every measure of people’s well-being—living standards, employment security, health, education, environmental protection, democratic participation and more.

Link to the report: