"United Goal, One Voice" is aim of partnering agreement between Kenya's metal workers union and associations of artisans and other informal workers. 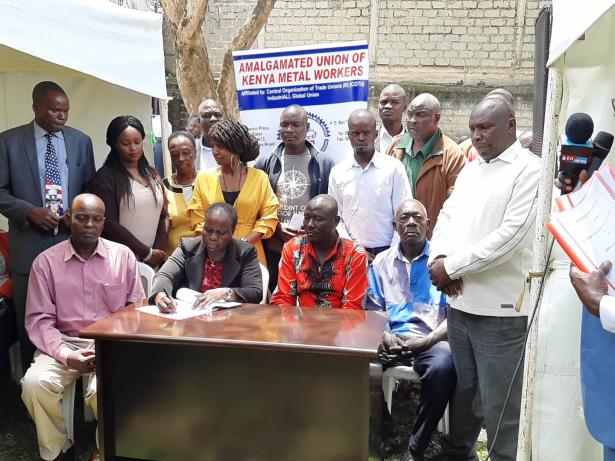 To effectively unite, recruit and organize informal metal workers, the Amalgamated Union of Kenya Metal Workers (AUKMW) and other unions have signed agreements with the Ambira Jua Kali Artisans Association and the Migingo Self Help Group Association.

“United, One Goal, One Voice” read a banner during the signing ceremony of the ground-breaking agreements between unions and informal workers’ associations in Nairobi on 29 October. The agreements will promote “a partnering framework for parties in addressing the issues of workers in the informal metal work industry.”

The aim is for the associations to affiliate to the union. Among other responsibilities, the unions will represent the informal workers in legal disputes, conciliation and arbitration, address social economic needs, and engage in policy reform to improve the informal economy. The informal workers will also take part in union activities including Labour Day celebrations, annual general meetings, and benefit from training programmes.

“When we started organizing the informal sector — mechanics, spray painters, welders, panel beaters and vehicle body builders — we realized that recruiting individuals was difficult and decided to work with the artisans’ associations.”

According to the agreements, instead of individual membership, the associations become affiliates of the unions and their members will get the same benefits as other union members.

Unlike formal workers who can be organized from their factories and workplaces, informal artisans work from different places like their homes, markets and street corners.

The Ministry of Labour, Federation of Kenya Employers, ILO, FES Kenya, Central Organisation of Trade Unions-Kenya, the Solidarity Centre and others witnessed the signing of the agreements.