My work as an immigrant rights activist helping asylum seekers and targeted immigrants. We help them prepare for — and we accompany them to — their deportation, detention and asylum hearings. The current success rate for asylum cases is 2%. 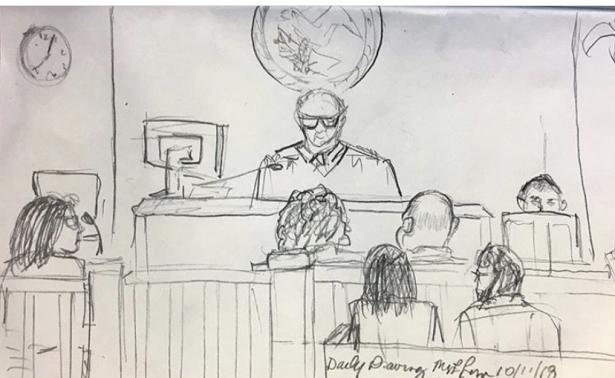 After two hours of questioning, the judge turned to my Friend and said the words, “very credible” at least twice. ”You’re a very credible defendant, Mr. ———-.... I find your story very credible.” Then he asked the lawyer for Homeland Security if she agreed. Her answer was simple, yet startling. “Yes” she said, “I do.”

“Friend” is the term we use at New Sanctuary Coalition to refer to the immigrants who come to our free clinic. We help them prepare for — and we accompany them to — their deportation, detention and asylum hearings. The current success rate for asylum cases is 2%.

The judge continued very casually. “I’m going to give you asylum...” He said it as though he were saying, “I’m going to get a cup of coffee.” There was a collective gasp in the room. At first, I didn’t believe it. I turned to the woman sitting next to me, one of the dozen or so New Sanctuary Coalition volunteers who came to bear witness. “Did he say...?” Her face was a sheet of tears. I looked at my Friend. He was dabbing his eyes with a tissue. I knew the answer. He had just been granted asylum!

Then everything seemed to be floating in slow motion including the judge’s words: “Social Security Number... Work Permit...Green Card...Citizenship...” Everyone was hugging. The last thing I heard the judge say was, “Welcome to the United States.”

An hour later my Friend and I were gliding up Broadway toward our subways. He was glowing. I realized that, in the eight months my teammate, Omar Serrano Guerra and I had been helping him prepare for this day I had never seen him look happy. He told me he wanted to learn English and  would start looking for a class “mañana.”

We got to my subway station. We weren’t ready to go our separate ways so we decided 3:30pm was the perfect time for dinner! He offered to treat me and I accepted. Chatting and laughing, we were fully engaged when we entered a diner near the C-train. A blonde woman, in her early thirties and carrying a menu, greeted me. “Table for one?” she asked, completely ignoring my Friend.

Nothing is uncomplicated. Ecstasy and outrage can inhabit the same moment in time. We stretch to claim both. Welcome to the United States.

[Roberta Schine is a Yoga Instructor who teaches yoga in English and Spanish to People With Cancer and People With Movement Disorders in several New York City hospitals. She has been an activist all of her adult life. In the 1970's she was a member of It's All Right to be Woman Theater and she founded and directed The Karate School for Women, 1976-1996. Her story, Voyages of the Damned, about making the decision to join the Sanctuary Caravan and help immigrants at the US/Tijuana border last January was published in Portside.com. You can read her several of her stories, in Spanish, in the online Peruvian magazine, Hawansuyo.com. Roberta is a member of the New Sanctuary Coalition.]