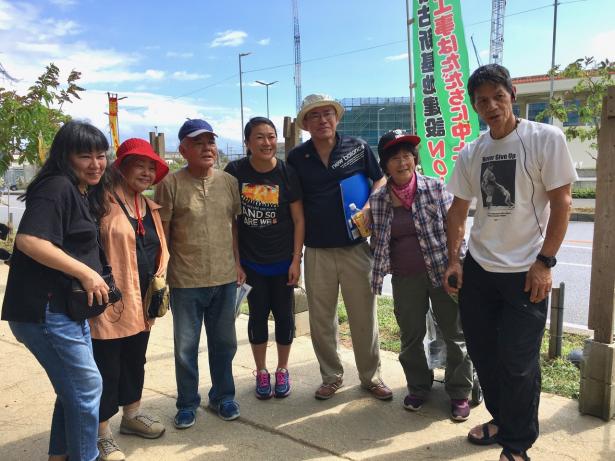 Okinawa is an island prefecture of Japan, located about 400 miles south of the rest of Japan. For years, there has been a campaign to stop the construction of the new U.S. military base at Henoko, located in the northern part of Okinawa. In a referendum held February 24, 2019, 72 percent voted against the new military base. Okinawan Governor Denny Tamaki and the Okinawan Assembly have actively opposed the base construction, but the U.S. and Japanese governments continue with the construction plans—in direct disregard for the will of the Okinawan people.

About 20 percent of the land in Okinawa is already occupied by U.S. military bases. The new military base in Henoko would create a serious environmental threat to the pristine coral reefs, face difficult engineering challenges in its construction, and entail an enormous financial outlay by the U.S. government. The existing bases already represent a significant threat to the safety and security of the people of Okinawa. At one point, the U.S. military maintained 1,200 nuclear warheads in Okinawa.

In August 2017, 24 leaders from Okinawa and Japan attended the APALA national convention in Anaheim, California. APALA passed two separate resolutions at their conventions in 2017 and 2019  (see below), calling for an end to the construction in Henoko. The APALA delegation traveled to Okinawa to strengthen friendship and solidarity between the people of the island and the United States.

APALA met with community victims who spoke of children and other civilian deaths and injuries caused by military plane crashes and accidents. In one highly publicized case in 1995, three U.S. service men kidnapped and raped a 12-year-old Okinawan girl.

On October 22, APALA representatives visited the peace encampment at Henoko. For many years, peace activists have staged daily vigils outside Camp Schwab, to physically obstruct the military trucks and vehicles engaged in the base construction. Many peaceful protestors have been removed and arrested. APALA leaders also took a boat tour of Oura Bay, which has one of the largest and most biodiverse blue coral reefs in the world—reefs that are directly threatened by the base construction.

That same day, APALA leaders participated in a workshop at Okinawa University to discuss plans to establish the first labor center in Okinawa to advance research and education on worker justice. The UCLA Labor Center has pledged to provide research and educational support to the Okinawa University faculty. The new labor center will promote opportunities to strengthen faculty and student partnerships between the Unites States and Okinawa on issues involving worker rights, peace, and social justice.

APALA President Monica Thammarath and Founding President Kent Wong addressed more than 120 participants at a symposium organized by the All Okinawa Coalition to Prevent Construction of a New Base in Henoko, held on October 23. Ms. Thammarath is a child of Southeast Asian refugees who fled their native Laos during the U.S. War in Southeast Asia. Okinawa was a major launching ground for the U.S. planes that dropped more bombs on Vietnam, Laos, and Cambodia than all of the bombs dropped on Europe during World War II. U.S. military jets from Okinawa were also responsible for dropping napalm and other chemicals in Southeast Asia, that generations later are still poisoning the people.

Ironically, the APALA delegation experienced a flight delay as they were leaving the island because four U.S. fighter jets were taking off from the same commercial airport located in the Okinawan capital of Naha. The fact that U.S. fighter jets already have the use of the commercial runway raises serious questions about the necessity of yet another military base in Henoko.

Danger Posed by Trump and Abe

U.S. President Trump and Japanese Prime Minster Abe both promote nationalism and militarism, which threaten peace and security in the Pacific Rim. President Trump has engaged in a trade war with China, while his administration has intensified their anti-China rhetoric and actions. Prime Minister Abe has refused to apologize for World War II war crimes committed by the Japanese imperial military and has changed the constitution to allow for an expanded Japanese military today. Massive peace demonstrations have taken place in Tokyo and other cities in Japan. Because U.S. military base expansion on the Japan mainland would trigger even more extensive protests, Abe and his government are motivated to disregard the democratic wishes of the people of Okinawa and move forward with the military base construction at Henoko.

Abe’s actions have also increased tensions between South Korea and Japan. In South Korea, there are widespread consumer boycotts of Japanese goods to protest Abe and the Japanese government’s refusal to provide reparations for war crimes committed by the Japanese military during World War II.

The increased tensions in the Pacific region also raise threats of growing conflict and the potential for war, factors that also raise concerns for the people of Okinawa. More than 240,000 people were killed on the island during the Battle of Okinawa at the end of World War II. Everyone in Okinawa has been touched by the devastation of war.

Resolution to Support the People of Okinawa

Passed by the APALA, AFL-CIO National Convention in August 2019

WHEREAS the plans for U.S. military base expansion continue to threaten the peace and security of the people of Okinawa;

WHEREAS the threat of war has escalated, especially with the pro-militarism positions of both the U.S. and Japanese governments;

WHEREAS there have been documented instances of crimes against the people of Okinawa committed by U.S. military service members and base workers;

WHEREAS there has been intensified repression against the peaceful protestors on Okinawa;

THEREFORE BE IT RESOLVED that the APALA Convention calls on the following actions:

*APALA will continue to support the movement for peace and environmental stability, and against U.S. military base expansion in Okinawa;

*APALA will continue to explore exchanges with our brothers and sisters of Okinawa, and will encourage APALA members to travel to Okinawa to express our friendship

Kent Wong is Director, UCLA Labor Center Director and APALA Founding President.  Portside thanks the author for sharing this article.