November 11: Remembering the Tragedy and Legacy of World War 1

As a country, the US has moved from being a reluctant, late entrant into World War 1 to being the premier merchant of death in weapons sales and premier militarist nation, engaged in a perpetual state of war waged from an empire of military bases. 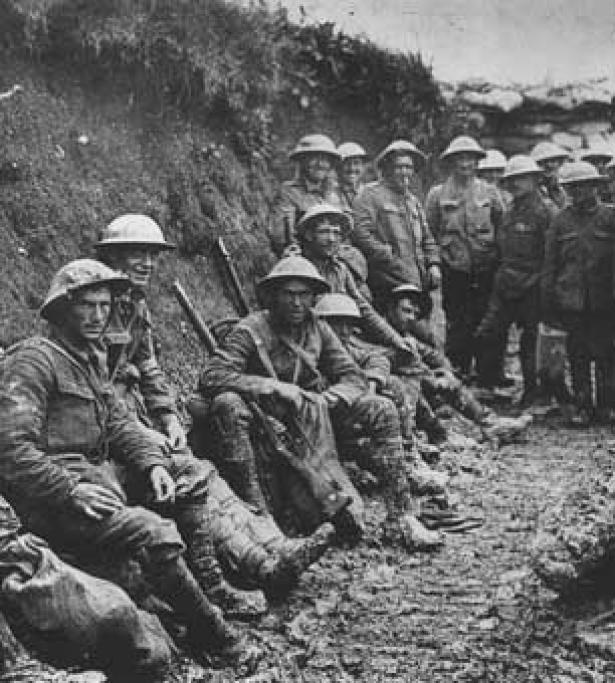 A ration party of the Royal Irish Rifles in a communication trench during the Battle of the Somme. The date is believed to be July 1, 1916, the first day on the Somme., Royal Engineers No 1 Printing Company

Watching Londoners reveling in the streets on Armistice Day, November 11, 1918, the war critic and pacifist Bertrand Russell commented that people had cheered for war, then cheered for peace –“ the crowd was frivolous still, and had learned nothing during the period of horror.” (1)

World War 1 was the first industrial war: poison gases, flamethrowers, aerial bombing, submarines, and machine guns intensified the scale of war wreckage and war dead, setting the norm for 20th and 21st century wars.  By government policy, British war dead were not sent home lest the public turn against the war.  Instead they were buried in vast graveyards near battle sites in France and Belgium.  Even today Belgian and French farmers plowing fields in places of intense, interminable fighting and mass death on the Western Front unearth an estimated ½ million pounds of war debris and soldiers’ bones each year.  (During the Afghanistan and Iraq wars Pentagon policy prohibited media coverage of US war dead arriving at Dover Air Base in Delaware until the ban was lifted, with conditions, in 2015.  Many regarded the ban, like the Word War 1 British policy, as hiding the human cost of war that could turn the public against the war.)

From the unyielding ugliness and butchery of World War I emerged soldier poets, notable among them Siegfried Sassoon and Wilfred Owen, whose unsparing style and content separated them from the tradition of glorifying war. These soldier poets, living in a trench war fraught with dead bodies and rats that fattened on them and with rear guard commanders who sent battalions of teenage boys into the slaughter of machine gun fire, rebuked their country’s war-mongering politicians and industrial profiteers.   (Likewise today, the majority of veterans of US wars in Afghanistan and Iraq – in stark contrast to politicians of both parties – agree that the wars they fought wasted human lives and achieved no human progress.)

World War I soldiers had only each other in the face of death – a reality incarnated in the 1914 Christmas truce spontaneously initiated by British, French and German soldiers facing each other in trenches.   Soldiers on both sides lay down their weapons, crossed over barbed wire and shell holes and greeted each other with their Christmas gifts of food, beer, champagne and schnapps.  Together they buried corpses of the fallen that lay in the narrow no-man's land between them, played soccer with tin cans and straw-filled sandbags for balls, sang carols, took photos, and exchanged mementos and addresses.

The unique comradeship of war lingered also with Erich Maria Remarkque, who enlisted at 19 in the World War I German army.  He, too, admits bitterly that a sense of ideal and almost romance of war, propagated by the state’s total propaganda campaign, turned high school boys into willing recruits for slaughter.  Some ten years after the war’s end, he published his first (and what some consider the greatest) anti-war novel, All Quiet on the Western Front.  In perhaps the most incisive moment of Remarkque’s novel, a young German soldier gazes upon a young French soldier he has killed and ponders their common humanity, with words that undercut the war’s hard-bitten hatred and national chauvinism.   “Why do they never tell us that you are poor devils like us, that your mothers are just as anxious as ours, and that we have the same fear of death, and the same dying and the same agony.“

War profiteering in World War I was mammoth:  The gunpowder giant DuPont saw its fortunes increase nearly 10-fold during the World War I and wartime profits of General Chemical Company soared by 1,400 percent.  Leather, bootmaking, garment and metals industries; airplane, engine and ship builders – all the outfitters of armed conflict – enjoyed immense profit.

Of the estimated $52 billion cost of World War I, industry war profiteers pocketed nearly one third.  More than 21,000 new American millionaires and billionaires emerged from the human ashes of the war, while the federal government was mired in post-war debt – a debt paid for by working people’s taxes.

Little has changed with regard to war greed except that war industry profits have grown exponentially together with the national budget for the military.  Today spending on military defense greatly exceeds the total spending for our real national security needs, namely education, transportation, housing and community development, diplomacy, environment, science and energy, and health and human services.  As a country, the US has moved from being a reluctant, late entrant into World War 1 to being the premier merchant of death in weapons sales and premier militarist nation, engaged in a perpetual state of war waged from an empire of military bases.

World War I, ultimately, was an immense and complex setback for democracy.   In his acclaimed book of this war, To End All Wars, Adam Hochschild collates the direct and collateral death, injury, enmities, and poisonous legacies of this total war.

The Treaty of Versailles was forged by the Allies and signed by a reluctant Germany on June 28, 1919.  It established the reduction of German territory and its disarmament.  It also required Germany to make huge reparation payments and to formally admit guilt for starting the war.  The British blockade of Germany continued to starve the country after the war’s end.  The punitive peace treaty has been widely described as sowing the seeds of World War II: “’The tragedies of the future [were] written into it as if by the devil’s own hand,’” stated historian-diplomat George Kennan.

After a week of travel along the Western Front and walking among miles of cemeteries for British, Belgium, French and other soldiers killed in war, historian Adam Hochschild finds a lone, out of the way plot with a large cross and a dozen small ones honoring the 1914 Christmas truce, spontaneously celebrated by soldiers on both sides.   He notes that the modest memorial was near where they had played soccer together and that on one of the small crosses someone had carved the word “imagine.”

*Veterans Day originated as “Armistice Day” on Nov. 11, 1919, the first anniversary of the end of World War I.  In time it became a day to remember veterans of all US wars.

This piece is an abridged and modified version of  https://truthout.org/articles/wwi-same-protests-of-futility-folly-heard-today/

Pat Hynes is a retired Professor of Environmental Health and author/editor of 7 books.  She directs the Traprock Center for Peace and Justice in western Massachusetts. https://traprock.org