We’re headed for a separation of powers showdown between Congress and the president that will ultimately end up in the Supreme Court. 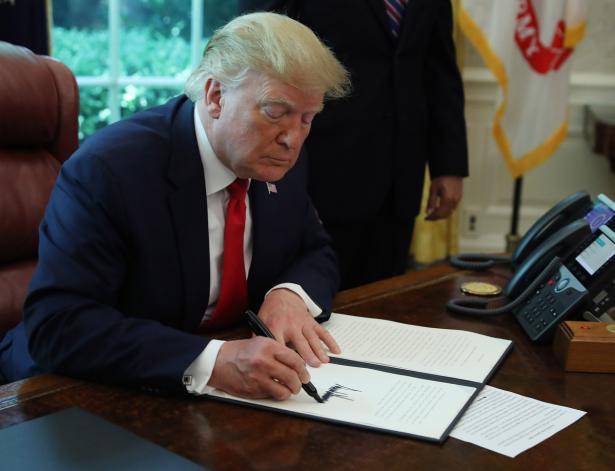 The Constitution gives Congress the “sole Power of Impeachment.” Yet President Donald Trump has ordered all of his current and former senior advisers to defy congressional subpoenas to testify in the impeachment inquiry. Trump is claiming the subpoenaed witnesses have “absolute immunity” against civil or criminal liability for refusal to provide testimony. However, “absolute immunity” is a creation of the Department of Justice’s Office of Legal Counsel. No court, statute or constitution has ever recognized it.

Some subpoenaed witnesses have obeyed Trump’s command and refused to testify. But others have defied him and testified before the committees of the House of Representatives gathering evidence during the impeachment process.

The committees are investigating a July 25, 2019, phone call between Trump and Ukrainian President Volodymyr Zelensky. In that call, Trump made $400 million in military aid, Javelin missiles and a meeting between the two presidents all contingent on Zelensky investigating the 2016 hacking of the Democratic National Committee and digging up dirt on Joe Biden and his son, Hunter.

However, “absolute immunity” is a creation of the Department of Justice’s Office of Legal Counsel. No court, statute or constitution has ever recognized it.

In his complaint, Kupperman asked the U.S. District Court for the D.C. Circuit to resolve the conflict between the legislative and executive branches and decide whether he must testify.

On October 26, Schiff, Engel and Maloney sent a letter to Kupperman’s lawyers, stating that the subpoena was still in force and the committees would consider Kupperman’s “defiance of a congressional subpoena as additional evidence of the President’s obstruction of the House’s impeachment inquiry.” Such defiance, they wrote, “may also cause the Committees to draw an adverse inference against the President, including” that Kupperman’s “testimony would have corroborated other evidence . . . showing that the President abused the power of his office by attempting to press another nation to assist his own personal political interests, and not the national interest.”

If such an abuse of authority by the President to muzzle current and former officials from disclosing to Congress evidence of his own misconduct were to stand, it would inflict obvious and grave damage to the House’s capacity to carry out its core Article I functions under the Constitution, including its impeachment inquiry into the President’s actions. This would fundamentally alter the separation of powers that forms the bedrock of American democracy.

On November 6, concerned about the delay Kupperman’s lawsuit would cause, the House of Representatives withdrew the subpoena. The House suggested that Kupperman abide by the decision in a pending lawsuit against former White House counsel Don McGahn. The McGahn litigation will, in all likelihood, resolve Kupperman’s dilemma about whether he is legally bound to testify.

The same legal issues Kupperman raised are at issue in a suit filed by the House Judiciary Committee to enforce its April 22 subpoena of McGahn to testify before Congress about efforts by Trump to obstruct Special Counsel Robert Mueller’s Russia investigation. In its complaint, the Judiciary Committee said McGahn was “the most important witness, other than the president, to the key events” that could form the basis for obstruction of justice by Trump. McGahn told Mueller that Trump ordered him to fire Mueller. When McGahn threatened to resign, Trump backed down. After Trump’s firing order became public, Trump tried to get McGahn to falsify evidence and deny it had happened.

The presidential orders to witnesses to disobey subpoenas to testify in the impeachment inquiry could constitute a third article of impeachment.

Citing the Office of Legal Counsel’s position that a sitting president cannot be indicted, Mueller did not conclude whether Trump committed obstruction of justice, although he set forth 10 possible grounds for obstruction. The Mueller report said that if the Special Counsel’s office “had confidence after a thorough investigation of the facts that the President clearly did not commit obstruction of justice, [it] would so state.” Mueller left it to Congress to address Trump’s obstruction of justice through the impeachment process, stating that the “Constitution requires a process other than the criminal justice system to formally accuse a President of wrongdoing.”

During the October 31 oral argument in the McGahn case, U.S. District Judge Ketanji Brown Jackson appeared highly skeptical of the White House’s claim that current and former top presidential advisers have absolute immunity from congressional subpoenas. Jackson said she would issue a ruling as early as possible.

“Absolute Immunity” Is Not Supported by the Constitution, Case Law or Statute

Trump’s assertion of “absolute immunity” is not supported by the U.S. Constitution or any judicial opinion or federal statute. It reflects only the opinion of the Department of Justice’s Office of Legal Counsel (OLC), which is itself a part of the executive branch. Since the 1970s, the OLC has taken the position that “the President and his immediate advisers are absolutely immune from testimonial compulsion by a Congressional committee.”

The only court to address absolute immunity rejected it. The issue arose in the 2008 case of Committee on the Judiciary v. Miers, which was brought by the House Judiciary Committee against President George W. Bush’s former White House counsel Harriet Miers for defying a subpoena to testify about the termination of nine U.S. attorneys. The federal district court decided in favor of the House Judiciary Committee, stating, “Clear precedent and persuasive policy reasons confirm that the Executive cannot be the judge of its own privilege and hence Ms. Miers is not entitled to absolute immunity from compelled congressional process.” (The court in that case left open the possibility that it might reach a different result if national security or foreign affairs were at issue.) Nevertheless, the Miers case has no precedential value since it was settled before an appellate court could rule on the issue.

Those who have already testified, notwithstanding Trump’s order to defy subpoenas, have given damning testimony against him. Here are summaries of some testimonies already provided by key witnesses:

–Lt. Col. Alexander Vindman, top Ukraine expert on the National Security Council, listened in on the July 25 call. He then twice complained to John Eisenberg, deputy White House counsel for national security affairs, expressing his alarm at Trump’s attempt to get Zelensky to sully his political opponents.

–William Taylor, acting ambassador to Ukraine, testified it was his “clear understanding” that U.S. aid would be withheld until Ukraine began to investigate Joe Biden.

–Gordon Sondland, U.S. ambassador to the European Union, initially said he “never” thought there were preconditions on the assistance to Ukraine, but later contradicted his former testimony.

–John Sullivan, deputy secretary of state and Trump’s nominee for U.S. ambassador to Russia, testified that Trump’s requests to Zelensky were improper.

–Timothy Morrison, a senior National Security Council aide who resigned on the eve of his scheduled testimony, testified that he was on a call between Trump and Sondland, during which Trump denied seeking a quid pro quo but proceeded to “insist” that Zelensky publicly announce investigations into the Bidens and other Democrats.

Several witnesses have obeyed Trump’s command and refused to testify. They include John Eisenberg, who is a material witness to the cover-up surrounding the July 25 call. After Vindman expressed his concern about the call, Eisenberg ordered the records of the call transferred to a top-secret computer server used only for the most sensitive government information. Eisenberg is refusing to comply with a subpoena to testify.

Other subpoenaed witnesses who have refused to testify include Mike Ellis, Eisenberg’s deputy; Robert Blair, senior adviser to Mulvaney; Russell Vought, acting director of the Office of Management and Budget; and Brian McCormack, associate director of the White House budget office.

This may prove to be one of the pivotal separation of powers cases of our time.

Meanwhile, on November 1, the Office of Legal Counsel issued a guidance stating that subpoenaed executive branch witnesses need not testify in impeachment inquiries “about matters that potentially involve information protected by executive privilege without the assistance of agency counsel.” Witnesses who are testifying before congressional committees in the impeachment inquiry may be accompanied by personal attorneys, but not government ones.

Whether senior presidential advisers enjoy “absolute immunity” if they refuse to comply with a congressional subpoena to testify at an impeachment inquiry will invariably be decided by the Supreme Court. Judge Jackson’s decision in the McGahn case will be appealed to the Court of Appeals and then to the Supreme Court. This may prove to be one of the pivotal separation of powers cases of our time.