Democratic infighting over Medicare for All is unnecessary and dangerous. To criticize a plan that is in-depth and thoughtful, and addresses the very issues we need to address, and has the support of enormous numbers of Americans, is a big mistake. 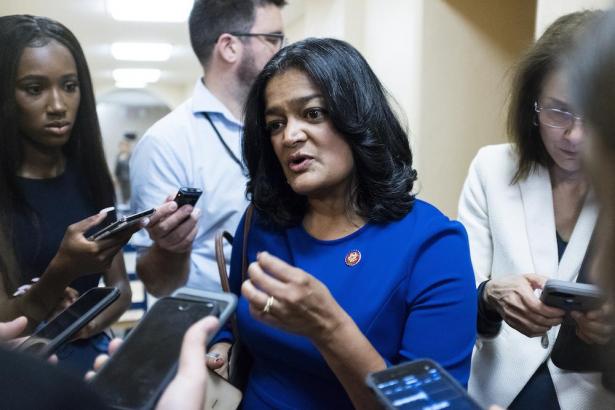 “I wrote the damn bill,” Bernie Sanders frequently says. But on Medicare for All, he’s not the only one. Pramila Jayapal, a second-term Representative from Seattle who has rapidly ascended as a progressive congressional leader, wrote the House version of single-payer. The co-chair of the Progressive Caucus has been touring the country to talk about it. She feels Medicare for All has been unfairly maligned during the presidential primary cycle.

“It is very frustrating to have your own party making the arguments of Republicans and insurance companies.” Jayapal told the Prospect in an interview after a health care town hall in Los Angeles. “And they’re not accurate in their representations.”

Jayapal’s bill, H.R. 1384, has 119 co-sponsors in the House, and was the subject of historic hearings in the Budget, Rules, and Ways and Means Committees, the first time Medicare for All has been formally debated in Congress. Jayapal said that Energy and Commerce, another committee with jurisdiction over health care, would hold hearings soon. But as Elizabeth Warren hunkers down to determine the financing for a national health care program, and as Joe Biden and Pete Buttigieg attack the concept, the benefits of getting everyone in the nation covered have been pushed to the side.

For Jayapal, the debate comes down to two things: coverage and cost—but not government costs. “It is absolutely absurd to subject Medicare for All to a different standard of scrutiny,” she says. “Instead of saying, ‘Wow, Medicare for All costs too much, how are you going to pay for it,’ the question to every candidate should be, ‘What is your plan to bring down health care costs over the next ten years? And what is your plan to universally cover everybody, because none of the other plans do that.’”

H.R. 1384 takes direct aim at lowering health care costs, more than the Affordable Care Act or even Bernie Sanders’s companion bill in the Senate, by setting a global budget for health care providers. Instead of Medicare paying individually for each service, providers would get a set budget for the year to work within. Bonuses for employees, marketing expenses, and political donations would be strictly disallowed, and special funds for new equipment or managing an epidemic would be segregated. Hospitals would have to manage costs better, perhaps by reducing re-admissions, eliminating unnecessary treatments, purchasing supplies more cheaply, or maybe even cutting salaries for administrators.

Rare among politicians, Jayapal has been willing to cite the hospital industry’s role in unsustainable price increases. But she has also attempted to drive a wedge within the wall of opposition to health care reform among hospital industry leaders. “I’ve been meeting with a number of major hospital CEOs, in community-based care [and] state hospital systems,” Jayapal says. “They are getting upset with the American Hospital Association’s opposition and the money they are putting in. So I’m working to try to build a little coalition that will feel brave enough to come out.” Some hospital CEOs have cited the high cost of securing care for their own employees as a reason to transform the system.

The U.S. pays more for health care than any other industrialized nation, which is why a mechanism like global budgeting is so critical. Yet the only costs being discussed in the national debate involve the taxes to pay for the government’s assumption of insurance. Overlooked in that discussion is the fact that the federal and state governments already pay for two-thirds of the system through Medicare, Medicaid, and private-insurance subsidies.

Jayapal argues that reducing costs to international norms is one way for Medicare for All to pay for itself. “You can’t legitimately say that you’re going to fix the health care crisis we have if you don’t bring down the costs,” she says.

By driving down costs through global budgeting, negotiating prescription drug prices, busting up health care monopolies, and other measures, you end up with significantly lower financing needs. Cutting out such middlemen as for-profit insurers gets you part of the way there, but only part. “You do have to have a mechanism to directly address that for the future,” Jayapal says.

Jayapal’s ideas for reducing costs were borne out recently by an analysis of the effects of H.R. 3, a modest bill that allows the government to negotiate prices on 25 high-cost drugs per year. Despite that small number, the Congressional Budget Office estimated that such negotiations would save the government $345 billion over a ten-year period. “Imagine if it was 250 drugs,” Jayapal says. “Some members feel strongly about lifting the entire ban on negotiations.”

Moreover, it’s hard to know if these kinds of savings will be fully accounted for in the budgeting process. Moving from curative to preventive care, for instance, could save trillions, and while the Affordable Care Act went part of the way on that, Jayapal’s bill would go a lot further, particularly as those currently uninsured get regular treatments and thereby avoid more costly procedures. Medicare for All also eliminates the passed-on costs of uncompensated care.

Currently, Warren is working with outside experts to craft funding for her own Medicare for All plan. Jayapal’s and Warren’s teams have discussed the funding issue with each other. I asked Jayapal if she thought it was worth it for Warren to counter the somewhat disingenuous debate around costs, where it’s only the supporters of Medicare for All who have to justify them.

“The way [Warren] talks about it in terms of overall costs instead of taxes is actually the right way to talk about it,” Jayapal answers. “I think some of this is also for her to be comfortable with how to respond on this. Because this was Bernie’s original bill that she sort of signed onto, I think she has been less engaged on some of the details. If she wants to come up with two or three things, that will give her that muscle to say, ‘I’ve looked at this, and this is how I’m proposing to pay for it.’ What I hope is that it gets that question off the table, because I think it’s a red herring.”

The constant talk about financing crowds out the benefits of Medicare for All. Jayapal highlights the angle of personal freedom. “I have so many people who write to me with these unbelievable stories about how they have these dreams and they were lost, because they have to work for a company that they totally don’t believe in because they need the health care,” she explains. “People who have gotten divorced because that’s the only way to get care. I do think a part of this health care debate is about the freedom to dream and be. And we don’t talk about that nearly enough.”

Ultimately, Jayapal finds the Democratic infighting over Medicare for All to be unnecessary and dangerous. “We have to be united in the end of whatever comes out of this presidential debate,” she says. “I have not said anything bad about the Affordable Care Act: We can’t wait for the perfect system, we’ve got to do what we can to shore it up. However, to criticize a plan that is in-depth and thoughtful, and actually addresses the very issues we need to address, and has the support of enormous numbers of Americans, is a big mistake.”

Jayapal says that one of her biggest fears is that a Democratic president wins in 2020 and doesn’t follow through on alleviating the health care crisis. “For 2024, if we don’t have this addressed, and Americans don’t see substantial improvements in these broad structural issues, we’re not going to win,” she says. “That is what gave rise to Trump. I have said that Trump is both a symptom and a cause. Those entrenched interests that have stopped us from making these structural changes, like with the Affordable Care Act, have to be taken on.”