Moscow has run a yearslong operation to blame Ukraine for its own 2016 election interference. Republicans have used similar talking points to defend President Trump in impeachment proceedings. 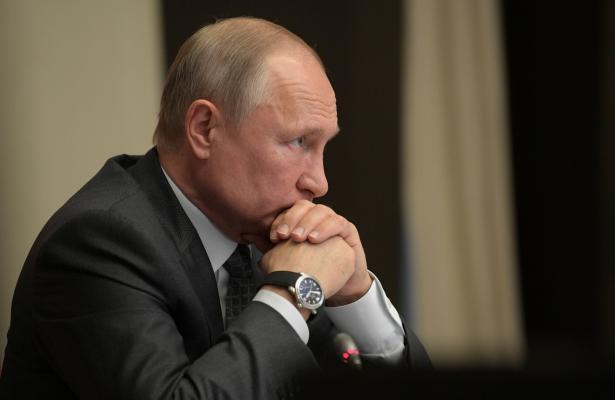 President Vladmir V. Putin of Russia has been pushing false theories of Ukrainian interference since early 2017, according to American officials, Alexei Druzhinin/Sputnik, via Reuters

WASHINGTON — Republicans have sought for weeks amid the impeachment inquiry to shift attention to President Trump’s demands that Ukraine investigate any 2016 election meddling, defending it as a legitimate concern while Democrats accuse Mr. Trump of pursuing fringe theories for his benefit.

The Republican defense of Mr. Trump became central to the impeachment proceedings when Fiona Hill, a respected Russia scholar and former senior White House official, added a harsh critique during testimony on Thursday. She told some of Mr. Trump’s fiercest defenders in Congress that they were repeating “a fictional narrative.” She said that it likely came from a disinformation campaign by Russian security services, which also propagated it.

In a briefing that closely aligned with Dr. Hill’s testimony, American intelligence officials informed senators and their aides in recent weeks that Russia had engaged in a yearslong campaign to essentially frame Ukraine as responsible for Moscow’s own hacking of the 2016 election, according to three American officials. The briefing came as Republicans stepped up their defenses of Mr. Trump in the Ukraine affair.

The revelations demonstrate Russia’s persistence in trying to sow discord among its adversaries — and show that the Kremlin apparently succeeded, as unfounded claims about Ukrainian interference seeped into Republican talking points. American intelligence agencies believe Moscow is likely to redouble its efforts as the 2020 presidential campaign intensifies. The classified briefing for senators also focused on Russia’s evolving influence tactics, including its growing ability to better disguise operations.

Sign Up for On Politics With Lisa Lerer
A spotlight on the people reshaping our politics. A conversation with voters across the country. And a guiding hand through the endless news cycle, telling you what you really need to know.

Russia has engaged in a “long pattern of deflection” to pin blame for its malevolent acts on other countries, Dr. Hill said, not least Ukraine, a former Soviet republic. Since Ukraine won independence in 1991, Russia has tried to reassert influence there, meddling in its politics, maligning pro-Western leaders and accusing Ukrainian critics of Moscow of fascist leanings.

“The Russians have a particular vested interest in putting Ukraine, Ukrainian leaders in a very bad light,” she told lawmakers.

But the campaign by Russian intelligence in recent years has been even more complex as Moscow tries not only to undermine the government in Kyiv but also to use a disinformation campaign there to influence the American political debate.

The accusations of a Ukrainian influence campaign center on actions by a handful of Ukrainians who openly criticized or sought to damage Mr. Trump’s candidacy in 2016. They were scattershot efforts that were far from a replica of Moscow’s interference, when President Vladimir V. Putin ordered military and intelligence operatives to mount a broad campaign to sabotage the American election. The Russians in 2016 conducted covert operations to hack Democratic computers and to use social media to exploit divisions among Americans.

Read the entire story at the New York Times