When considered altogether, according to MACPAC's report, their Medicaid programs will be more than $1 billion short. 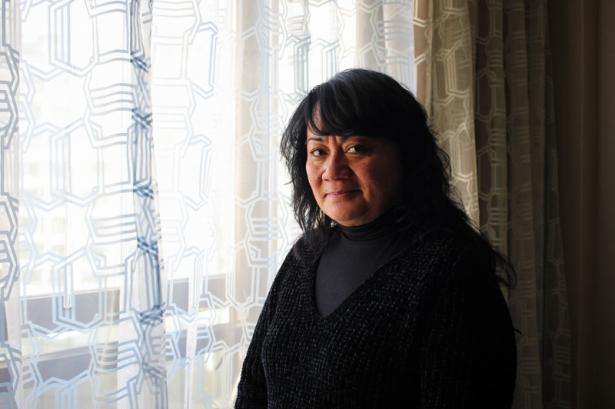 Sandra King Young runs Medicaid in American Samoa, a U.S. territory that faces dramatic funding cuts to islanders' health care unless Congress acts. "This is the United States' shame in the islands," she says. , Selena Simmons-Duffin/NPR

Right now, there are dozens of patients — U.S. citizens — in New Zealand hospitals who are fighting the clock. They have only a few weeks to recover and get home to the tiny island of American Samoa, a U.S. territory in the South Pacific.

"We have a cancer patient that is coming back in December," says Sandra King Young, who runs the Medicaid program in American Samoa. "We can only give him six weeks of chemo, radiation and surgery. He has a good chance of survival if he has the full year of treatment, but not six weeks. The patient and family understand, and since they have no money, they have agreed to come back."

The federal money to fully fund the Medicaid program in American Samoa and in all other U.S. territories is about to run out. As a consequence, the off-island referral program to treat conditions that the territory doesn't have the local capacity or facilities to treat — the program that brought these patients to New Zealand — is getting shut down.

"It's devastating for those people who need those lifesaving services," King Young says. "People who need cancer treatment won't get it. Children with rheumatic heart disease won't get the heart surgeries that they need."

All five of the U.S. territories affected — collectively home to more than 3 million Americans — are now desperately trying to figure out how to keep Medicaid running with only a fraction of the money they've had for the last several years. If Congress doesn't increase the amount of designated money by the end of the year, the U.S. Virgin Islands and Guam say they would need to cut their Medicaid rolls in half; Puerto Rico says it would need to cut back dental and prescription drug services.

This is what people working on the issue have come to call the "Medicaid cliff."

How did we get here?

When it comes to Medicaid, the federal government treats U.S. territories differently from how it treats states.

In U.S. states, the amount that the federal government contributes to Medicaid varies based on a formula in the law that relies on per capita income in each state. For instance, Alabama has a match rate of 72%; what this translates to is that for every dollar Alabama spends on Medicaid, the federal government contributes about $2.57 to the program.

The other significant difference is that the federal contribution to Medicaid in the territories is capped, with a set allotment of federal funds every year. Federal spending on Medicaid in states is not.

The low matching rate and the annual cap — that's pretty much how it has always been for Medicaid in the territories, says Robin Rudowitz, who co-directs the Program on Medicaid and the Uninsured at the Kaiser Family Foundation. "These particular provisions historically have always been part of how they have been financed," she says.

Here's how the territories found themselves peering over the "Medicaid cliff." For the last few years, the territories have had billions of dollars more in federal funding to run their programs than their usual capped allotments. First, the Affordable Care Act provided a one-time grant of $7.3 billion (which kicked off in 2011) for the territories' Medicaid programs. Then, in 2017, after two Category 5 hurricanes ravaged Puerto Rico and the U.S. Virgin Islands, an extra $4.9 billion designated for their Medicaid programs was added to the 2018 Bipartisan Budget Act. 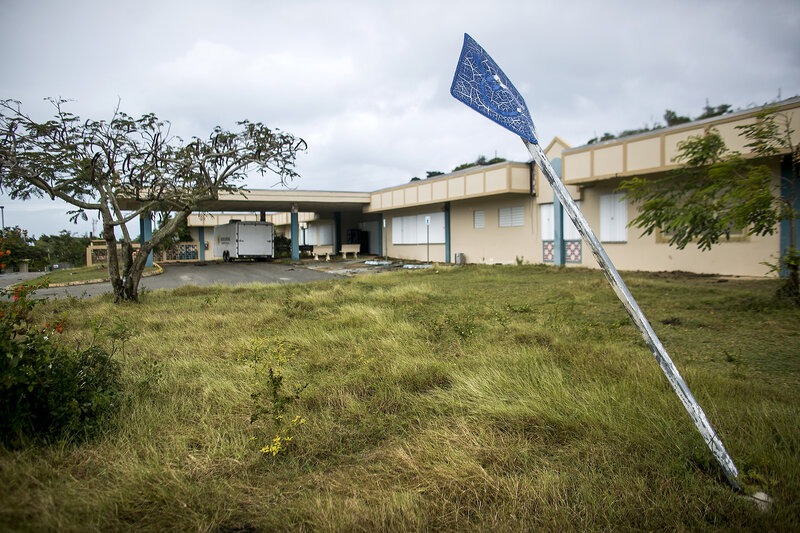 The Family Health Center Susana Centeno on remote Vieques island, part of Puerto Rico, was forced to close after it suffered damage from Hurricane Maria in 2017.

Now, we've come to the cliff's edge. Most of these two pots of money ran out at the end of September, with just a bit of funding from the ACA still available through the end of 2019.

That leaves, essentially, just the capped allotment of federal dollars for each of the territories — far less than what the territories have come to rely on to provide care to their Medicaid enrollees in recent years.

"The capped financing amounts were low and did not meet all of the needs of the population in the territories," says Rudowitz. If the additional federal contributions are gone for good, she says, "given the share that they represent of the financing for Medicaid in these territories, it would mean major changes and reductions in care."

The territories have known that this funding cliff was coming for years — the end to a major portion of the money was written into the ACA. Island health officials and care providers hoped Congress would have legislated a more permanent solution by now, but it hasn't.

The Medicaid and CHIP Payment and Access Commission, known as MACPAC, a nonpartisan government group that advises Congress on Medicaid policy, projected in July that all the territories will have budget shortfalls in 2020. When considered altogether, according to MACPAC's report, their Medicaid programs will be more than $1 billion short.

This is why Medicaid directors in the U.S. territories are all sounding the alarm. King Young, of American Samoa, points to news coverage as far back as the 1960s that described her island as "America's Shame in the South Seas" because of rampant pollution and neglect.

"Right now, this is the United States' shame in the islands," she says. "Tell me if that's acceptable in the United States, to stand by and say, 'Oh, sorry, we can't give you that stent or that pacemaker, so it's likely that you'll have a stroke or heart attack and — that's it.' That's what it means not to have enough Medicaid funding for the territories."

The territories have been lobbying Congress, urging members to appropriate more funds for their Medicaid programs so health officials on the islands can avoid these hard choices — between, for instance, keeping a hospital going and paying for a patient's cancer treatment.

Each territory has a nonvoting delegate in Congress. Puerto Rico also sent an additional delegation from the island last week to make the case to lawmakers that something must be done to stave off disaster.

"I would say that we've been doing a full-court press this entire calendar year," says Jennifer Storipan, executive director of the Puerto Rico Federal Affairs Administration. "Gov. [Wanda] Vázquez has said that Medicaid funding is her highest priority for the island right now."

A bill to temporarily increase funding to the territories' Medicaid programs was passed by the House Energy and Commerce Committee in July but has yet to make it to the floor for a vote. It would greatly increase the federal match rate for Medicaid in all the territories and allocate a bonus $3 billion a year — but only for the next four years. There is no companion bill in the Senate.

"We're in active negotiations with the Senate, but there is some opposition to our bill in the Senate," says Rep. Darren Soto, D-Fla., who introduced the House legislation with Rep. Gus Bilirakis, R-Fla. Both represent districts in central Florida that have huge Puerto Rican populations, and Soto is of Puerto Rican descent. In the House, the bill has bipartisan support.

Opponents of the bill in the Senate say they worry that the billions of dollars that the territories are requesting could be misspent. Some senators have raised particular concerns about Puerto Rico. During a recent corruption probe, a Puerto Rican Medicaid official was arrested — that news emerged just a few days before a committee hearing on the territories' Medicaid bill in July.

"So that didn't help," Soto says. Integrity provisions were added to the House bill, he says, specifically addressing concerns about Puerto Rico. "We do need to take it seriously and make sure that tax dollars are safeguarded," he says, but adds, "There have been fraud instances in many states too, and we don't take away their Medicaid funding."

Some congressional Republicans note that the funding cliff was created by the Affordable Care Act, which gave extra funding to the territories for a limited time. In a letter to Secretary of Health and Human Services Alex Azar in July, several Republican members of the Senate Finance Committee raised concerns about Puerto Rico's Medicaid spending.

"We are again confronting proposals for what amounts to another extension of boosted funding with no permanence or certainty and without any resolution of the Medicaid funding cliff constructed as part of the ACA," they wrote.

"It is true: Giving these additional funds with a set expiration date, the legislation itself did create the cliff," acknowledges the Kaiser Family Foundation's Rudowitz. However, she says, Congress now should consider "the implications of letting that cliff happen and what that means to the health care systems in these territories."

Planning for the worst

Medicaid program administrators from each of the territories gathered in an impromptu meeting outside the annual Medicaid directors conference last week. They have spent a lot of time together in Washington recently, testifying before congressional committees about the Medicaid funding crisis as it approaches.

"We were here in May. We were here in June," Michal Rhymer-Browne, assistant commissioner with the Virgin Islands' Department of Human Services, told NPR that day. "We pleaded. We shared ourselves — everything that we could."

Despite their pleas, Congress has yet to act.

There are three options for managing a slashed budget for a program like Medicaid: reduce the size of payments to providers, cut the rolls or cover fewer services. All the territories say there's no way to go lower on provider payments — Puerto Rico's struggle with provider flight because of low pay is well known. So cutting the rolls and covered services is where the programs would need to find cuts, representatives of the territories say.

"Guam and [the Northern Mariana Islands] are about to topple over the cliff," Rhymer-Browne says. "And for the Virgin Islands, we are nearing the cliff and seeing the bottom right now."

Many of the territories would like to make improvements in the care they provide — invest in better facilities, recruit great health care providers, improve preventive care. All of that comes with upfront costs, they say, and they've had so much budget uncertainty that it has been impossible to move forward with those kinds of projects.

Right now, they're just trying to keep the lights on.

"The urgency is here for us to let our congressional members know — even going to January is extremely dangerous," Rhymer-Browne says. "It's already catastrophic for our territories. We really need them to make a move."