food Harvesting rice in Maine waters is a slow, sticky job, and it’s reconnecting Native peoples with a traditional source of nourishment.

Gedakina is a Massachusetts-based nonprofit that works with Native American communities on a range of causes, from promoting literacy to restoring ancestral food systems, including the wild rice harvest. 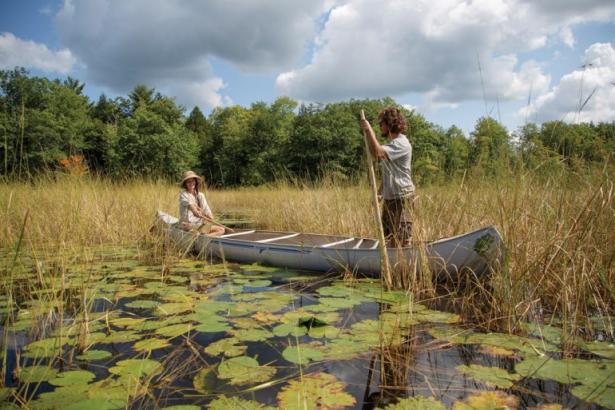 At a stream in central Maine, guides handed out basic tools: a long wooden pole for pushing canoes through the shallow water, plus two short, thick sticks for collecting wild rice from the grasses growing along the banks. On a crisp morning last September, rice plants stretched high into a blue sky.

Wild rice was a dietary staple for Maine’s indigenous peoples for much of their history — it sprouted in lush stands in fresh waters around the state. But as settlers took tribal lands and damming, logging, and other industrial practices disrupted ecosystems, the late-summer harvest became a thing of the past.

Gedakina is a Massachusetts-based nonprofit that works with Native American communities on a range of causes, from promoting literacy to restoring ancestral food systems. Last year, 10 Gedakina participants, including Mainers of Passamaquoddy and Penobscot descent, joined instructors from Blue Hill–based Way of the Earth traditional-skills school to harvest rice.

“A natural indigenous food system is a complex, interconnected combination of not just one strategy, but many,” said Kathy Pollard, then Gedakina’s development coordinator. “When you’re told to stay put and you can’t physically get to the rice, you lose that food system.”

The work among the closely grown grasses was slow going. In the back of the canoe, one person stood and poled (paddling would disturb the rice’s delicate roots). In the front, another person used one stick to hug the reeds and the other stick to tap the rice into the bottom of the canoe. The barbed tips of the husks stuck to clothes and hair as the canoes filled with rice.

Wild rice’s grains are deep purple and higher in protein, fiber, and other nutrients than the usual store-bought stuff. Consequently, there’s been an uptick in interest, and the harvesters asked that the location of their harvest remain unidentified. “It’s a limited resource, and it needs to be taken care of,” Way of the Earth instructor Kara Tyson said.

“We can’t go back to the way things were,” Pollard added, “but we can look at the pieces we can recover.”

After a few hours, the harvesters gathered back on shore, piling rice on nearby tarps. Traditionally, they’d take turns treading on the loose rice to separate husk from grain. Then, they’d use shallow baskets to flip the rice in the air and let the wind carry off the husks (modern harvesters often use fans to speed up the process).

The aim of this trip, though, was to gather rice with which to reseed Maine streams, lakes, and rivers. Way of the Earth and Gedakina are working to reestablish lost fields around the state. “And it’s not just so we can have more to eat,” Tyson said. “It’s a symbol of abundance of the landscape that’s really important to return to.”