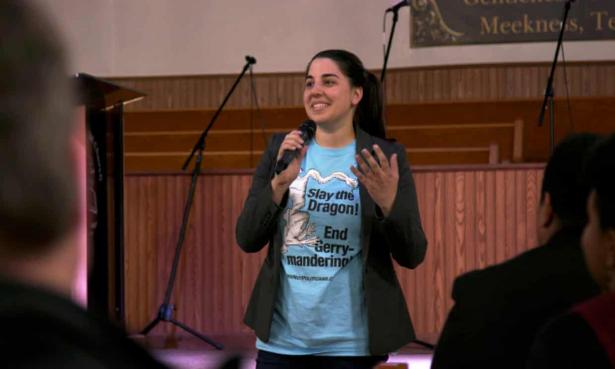 In 2016, Katie Fahey, a Michigan woman with no political experience, put up a Facebook post asking if anyone she knew wanted to do something about gerrymandering, a pervasive practice of lawmakers drawing district lines to benefit their own party.

Michigan is one of the most gerrymandered states in the country. At that time, Republicans held majorities in the state legislature and congressional delegation, even though Democrats earned a significant share of the statewide vote, and the state is considered politically competitive. And the GOP lawmakers were not subtle: emails made public last year revealed a Republican aide bragging about cramming “Dem garbage” into certain Michigan districts in 2011, as they drew the current electoral boundaries.

But Fahey’s post would create a movement that could provide a roadmap for making US elections fairer. Coordinating over Google Docs and fanning out across the state, her effort grew into a group called Voters Not Politicians that would eventually amend the Michigan constitution to strip redistricting power from lawmakers. This week, Voters Not Politicians succeeded in protecting the new reform from yet another attack from Republicans in the state – underscoring how deeply entrenched gerrymandering has become, and how hard it is to end.

Gerrymandering reform advocates believe the Michigan effort can serve as a model for reform elsewhere (a similar effort recently launched in Oklahoma). Even the supreme court chief justice, John Roberts, who wrote earlier this year that federal courts can’t do anything to fix partisan gerrymandering, has held up the Michigan effort as a pathway for fixing the problem.

But Voters Not Politicians’ success was far from guaranteed. Starting in 2017, Fahey and other members went to all of Michigan’s 83 counties, using public meeting spaces like libraries to gather. They dressed up in costumes in the shape of gerrymandered districts at intersections and other busy places and even wrote jingles about the topic, according to NBC News. As the group grew to thousands of volunteers, its leaders emphasized that people should leave their personal politics at the door once they joined, Fahey said earlier this year.

In 2017, the group drafted the measure to give redistricting authority to 13 Michigan residents – four Democrats, four Republicans and five non-affiliated voters, instead of lawmakers. More than 2.5 million Michigan voters approved the measure to amend the Michigan constitution and create the commission last year.

In the recent lawsuit in Michigan, Republicans took issue with a provision prohibiting anyone with close partisan connections from serving on the panel to ensure the districts are drawn fairly. They argued that those restrictions effectively punish them for their political beliefs and asked a federal judge to stop the creation of the commission. In a decision on Monday, the US district judge Janet Neff declined that request, writing that the Republicans’ arguments were unlikely to ultimately succeed in court. The Republican plaintiffs are appealing against the ruling.

Even though there was overwhelming support for the measure – it passed with about 61% of the vote – Republicans have used every maneuver they can to try to stop it over the past two years. They unsuccessfully tried to kick the measure off the ballot in 2018. And once Michigan voters approved it, they brought two lawsuits in federal court this summer, arguing that the commission violated the US constitution.

The group successfully got the measure to pass and has fended off a mountain of legal challenges, even though the people leading the effort were all “political novices”, said Nancy Wang, the executive director of Voters Not Politicians. “It’s upsetting because these politicians, some of whom are plaintiffs in one of the lawsuits against the amendment, are the ones that are supposed to be working for the voters that passed this amendment,” she said.

Gerrymandering – the practice of drawing political boundaries for partisan gain – has helped Republicans maintain majorities in state legislatures and congressional delegations since 2011. Creating independent redistricting commissions, as Voters Not Politicians did, is seen as one of the most potent ways to fight excessive partisan gerrymandering because it strips the power of redistricting from politicians, who can craft districts to their benefit, and gives it to neutral mapmakers.

The decision on Tuesday means that the independent redistricting commission, not state lawmakers, is still expected to draw the state’s electoral districts in 2021 for the first time. That’s likely to create electoral districts that more accurately reflect Michigan’s political makeup.

Meanwhile, Fahey has joined a new group, The People, and plans to take the organizing lessons to other states. And Wang said the repeated victories in Michigan should also give people thinking about challenging gerrymandering elsewhere hope.

“Victories like ours give people a lot of faith and hope that they still can make a change. That people together are still stronger than the people who occupy political seats,” she said. “Obviously, it’s not gonna be an easy road. People are gonna put up a fight.”