“If everyone intermingled—like we did when we linked up with the Russians—there could be no war.” On April 25, 1945, American and Russian soldiers met at the Elbe River and made a pledge for peace that we should heed today. 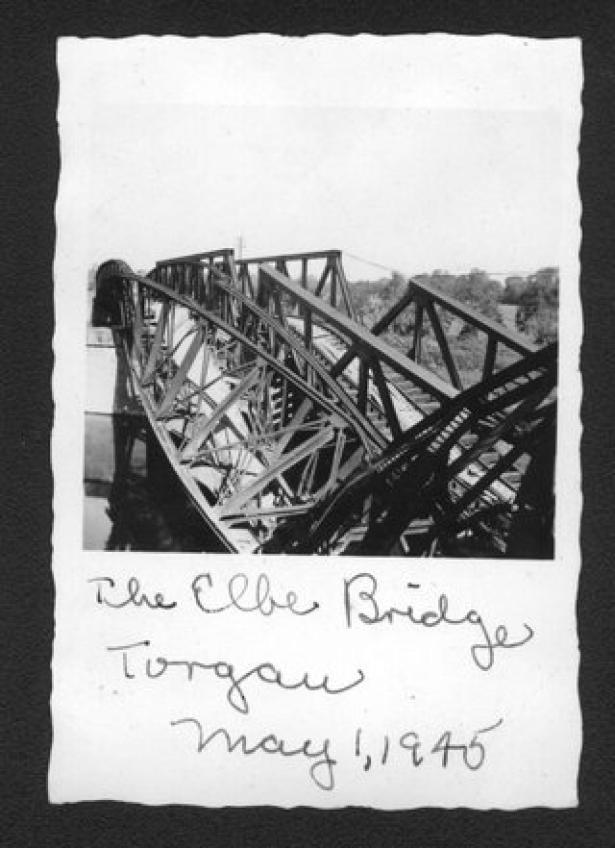 Every year on April 25, prior to his death from cancer in 1983, Chicago taxi driver Joseph Polowsky would stand on the Michigan Avenue bridge and pass out leaflets calling for a halt to the spread of nuclear weapons. When approached by passersby, he would tell them about a historic meeting between American and Russian soldiers at the end of World War II, along the Elbe River in Central Europe. He didn’t just know the details of the meeting, which marked a crucial step toward the end of the war, he took part in it.

It is a remarkable story, told in detail in the 1988 book, Yanks Meet Reds: Recollections of U.S. and Soviet Vets from the Linkup in World War II, edited by Mark Scott and Semyon Krasilshchik, and in an interview with Polowsky in Studs Terkel’s The Good War: An Oral History of World War II, published in 1984.

Polowsky was a Taft Republican who had served as a rifleman in the 273rd Infantry, Third Platoon, Sixty-ninth Division of the First U.S. Army, fighting the Nazis. On April 24, 1945, Polowsky was called into company headquarters and asked to form a patrol—seven Jeeps, twenty-eight men—to go five miles in front of enemy lines to see if they could get some signs of the Russians. Lieutenant Albert “Buck” Kotzebue, age twenty-six, was put in charge of the mission since he was of Russian heritage and considered the best platoon leader in the company.

When the men reached the Elbe at 11:30 a.m. the next day, Kotzebue shot up two green flares. Russian soldiers in the town of Torgau across the river responded by waving and joyously shouting “Amerikanski!”

Seeing that all the town’s bridges had been destroyed, the Yanks piled into a small sailboat to cross the river, and were greeted by Sgt. Alexander Olshansky, a veteran of the epic battle of Stalingrad. Also present was his company commander, Major Grigory Goloborodko, who later worked on a collective farm. Both men spoke German. Over drinks of Russian vodka and beer, they pledged to do everything in their power to prevent future wars.

Thus began the Oath of the Elbe.

Later, as more men joined them, the celebration continued over a banquet in the East German town of Torgau. As recounted in When Yanks Meet Reds, a toast was made to “the late President Roosevelt, President Truman, Prime Minister Churchill, Marshall Stalin, and everlasting friendship between us all.” Polowsky recalled that at the banquet “we drank and there were accordions and balalaikas and music and dancing. They played American songs [and] Russian girls were dancing. It was a strange sight, I was so captivated by the event that it took possession of me for the rest of my life.”

The American public got wind of the Elbe linkup through a newspaper photograph taken by Alan Jackson in which American and Russian soldiers were depicted stretching their hands towards each other on a broken bridge. Lieutenant Bill Shank of the 104th (Timberwolf) Infantry Division compared the spirit of prevailing brotherhood to the famous Christmas truce in World War I when British, French, and German soldiers left their trenches to celebrate Christmas together.

“Of all the experiences in my life,” Shank told an interviewer, “finding and meeting the Russians was the most memorable . . . . [T]he war made people love each other so much when it was finally over. If everyone intermingled—like we did when we linked up with the Russians—there could be no war.”

The U.S. Army’s conservative Stars and Stripes magazine devoted an entire issue to the linkup under the headline “Yanks Meet Reds.” Correspondent Andy Rooney, later of 60 Minutes fame, wrote that “you get the feeling of exuberance, a great new world opening up.”

Conveying a similar sentiment, Russia’s famed anti-Stalinist poet Yevgeny Yevtushenko wrote in his poem, “In a Steelworker’s Home”: “True, the great ocean, the Pacific, is between us. But we will swim it; no ocean so great it cannot become an Elbe! . . . Our common Elbe, we must not betray, Russia and America swim closer.”

The optimism of the time was enhanced by the preliminary formation of the United Nations in San Francisco the same day as the Elbe linkup. George T. Peck of the U.S. Office of Strategic Services said he had been “flooded with a warm surge of hope [on the Elbe] . . . the peace of the world was to be founded upon the friendship of our two great nations—the United States and Soviet Union.”

U.S. President Harry S. Truman appears to have felt the same way. On April 25, 1945, after hearing about the Elbe meeting, he wrote to Joseph Stalin: “The Union of our arms in the heart of Germany has a meaning for the world which the world will not miss. . . . Nations which can plan and fight together shoulder to shoulder in the face of such obstacles of distance and of language and of communications as we have overcome, can live together and can work together in the common labor of the organization of the world for peace.”

Unfortunately, Truman’s deeds did not match his words. By 1946, he had fallen under the sway of hawkish advisers who had deep ties to Wall Street and pushed for a hard-line policy against the Soviets. Henry Wallace was fired as Commerce Secretary after he gave a speech calling for peaceful cooperation with Russia and dismantling of American air bases. When Wallace ran for president in 1948, Truman’s campaign ushered in the McCarthy-era by smearing him as a communist sympathizer.

As the specter of a new Cold War descends upon us, progressives in the United States today should do everything in their power to reinvoke the Elbe spirit. Erased from our collective memory, the story of the linkup reminds us of the common humanity and capacity for friendship between the American and Russian people, and how the two great nations once cooperated to defeat the greatest evil the world has ever known.

Following his death, Joseph Polowsky was fittingly buried in Torgau, the city along the Elbe, where a peace monument commemorates the U.S.-Soviet linkup. “Polowsky’s gravesite,” his friend LeRoy Wolins noted, “became a world peace shrine.”

Jeremy Kuzmarov is author of “The Russians are Coming, Again: The First Cold War as Tragedy, the Second as Farce,” Monthly Review Press, 2018 and “Obama's Unending Wars: Fronting the Foreign Policy of the Permanent Warfare State,” Clarity Press, 2019.