After Rep. Greg Walden, the biggest recipient of pharmaceutical campaign cash in the last election cycle, met with Trump, the president decided to scrap his support for lower drug prices. 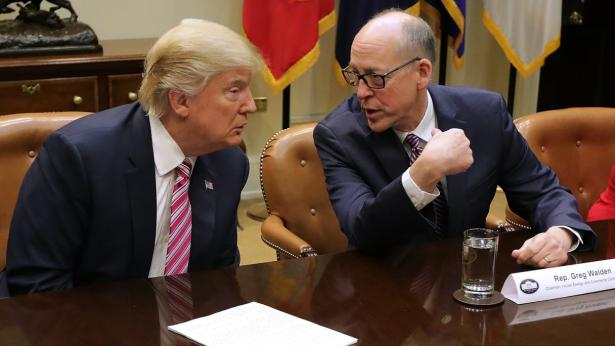 Since his 2016 campaign, President Trump has rhetorically stood against most Republicans by supporting a plan to have the government negotiate with pharmaceutical companies to achieve lower drug prices. But last week, Trump suddenly changed his tune.

“Pelosi and her Do Nothing Democrats drug pricing bill doesn’t do the trick. FEWER cures! FEWER treatments!” Trump tweeted on Nov. 22, referencing a bill from Speaker Nancy Pelosi (D-Calif.) that would facilitate the price negotiations he had long embraced. “Time for the Democrats to get serious about bipartisan solutions to lowering prescription drug prices for families.”

As recently as late September, Trump appeared to support negotiations. “It’s great to see Speaker Pelosi’s bill today,” Trump tweeted on Sept. 20, the day after the speaker unveiled her bill.

So why did Trump suddenly change his mind? The impeachment proceedings likely played a role, but according to The Hill, he has also been talking to a key pharmaceutical industry ally on the issue.

Trump’s tweet opposing Pelosi’s bill “came after he met with Rep. Greg Walden (R-Ore.), a leading opponent of Pelosi’s bill,” The Hill reported. Indeed, the “FEWER Cures” talking point Trump used in his tweet echoes the hashtag, #FewerCures, that Republicans on the House Energy and Commerce Committee, led by Walden, have been promoting in their materials opposing the bill.

Walden is not just a leading opponent of letting the government negotiate with drug companies—he’s also the House member who received the most campaign money from the pharmaceutical and health products industry in the last election cycle, according to the Center for Responsive Politics. So far this cycle, he has taken the third highest total from the industry of anyone in the House, despite plans to retire at the end of this session.

Pelosi’s bill, called the Lower Drug Costs Now Act, would require the Centers for Medicare and Medicaid Services (CMS) to negotiate prices on insulin products and a minimum of 25 of the most expensive drugs that do not have generic competitors. It would also penalize companies that increase the cost of drugs faster than the rate of inflation. The bill, which is expected to be voted on by the House in December, would save CMS $345 billion by 2029, according to an analysis by the nonpartisan Congressional Budget Office (CBO).

The government has been unable to negotiate for lower drug prices since 2003, when Congress included a provision banning negotiations in the bill that created the Medicare Part D prescription drug benefit. Walden voted in favor of that bill.

Some of Walden’s pharmaceutical donors make drugs that would likely be subject to price negotiations under the bill. AbbVie makes hepatitis C drug Viekira, which has a list price of $27,773 for a 30-day supply and does not have a generic competitor. Cerdelga, a Gaucher’s disease treatment that retails for $26,000 for a 30-day supply, is made by Sanofi Genzyme and does not have any generic competitors.

Walden’s objection to the bill is similar to that of the pharmaceutical industry: The reduction in drug company profits from allowing CMS to negotiate would lead to reduced spending on research and development. In its report on the bill, CBO states that while “in the short term, lower prices would increase the use of drugs and improve people’s health,” over the next 10 years the bill “would lead to a reduction of approximately 8 to 15 new drugs coming to market.”

To join Sludge, relentlessly uncovering corruption, Contact Us at hello@readsludge.com