labor Almost Half of All Americans Work in Low-Wage Jobs

Even though the economy is adding more jobs, there's increasing evidence that many of those new positions don't offer the kind of wages and benefits required to get ahead. Americans are working but aren't earning enough to gain economic stability. 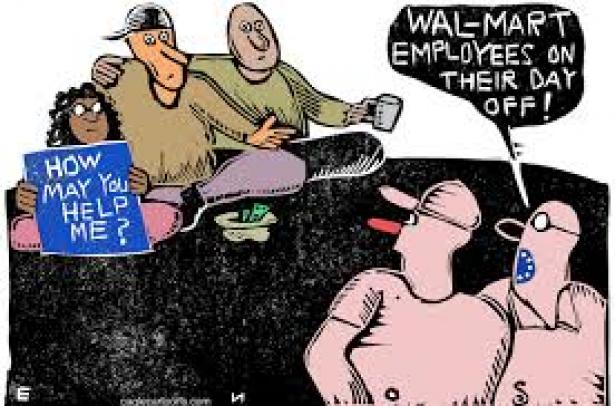 America's unemployment rate is at a half-century low, but it also has a job-quality problem that affects nearly half the population, with a study finding 44% of U.S. workers are employed in low-wage jobs that pay median annual wages of $18,000.

Most of the 53 million Americans working in low-wage jobs are adults in their prime working years, or between about 25 to 54, they noted. Their median hourly wage is $10.22 per hour — that's above the federal minimum wage of $7.25 an hour but well below what's considered the living wage for many regions.

Even though the economy is adding more jobs, there's increasing evidence that many of those new positions don't offer the kind of wages and benefits required to get ahead. A new measure called the Job Quality Index recently found there is now a growing number of low-paying jobs relative to employment with above-average pay.

For the U.S. overall, median household income is $66,465, according to Sentier Research, with roughly half of families earning less than that amount.

Workers aren't shy about expressing their frustrations, with about 6 of 10 workers saying their jobs are mediocre to downright bad, according to a recent Gallup job-quality survey. For instance, 1 in 5 workers told Gallup their benefits are worse now than five years ago.

Low-wage jobs represent between one-third to two-thirds of all jobs in the country's almost 400 metropolitan areas, Brookings found. Smaller cities in the South and West tend to have the highest share, such as Las Cruces, New Mexico, and Jacksonville, North Carolina, where more than 60% of workers are low-wage.

But not only small cities in the South and West have a high proportion of low-paid jobs, the Brookings authors noted.

"Places with some of the highest wages and most productive economies are home to large numbers of low-wage workers: nearly one million in the Washington, D.C., region, 700,000 each in Boston and San Francisco, and 560,000 in Seattle," Ross and Bateman wrote.

But, they added, the issue can't entirely be addressed by improving workers' skills, since low-wage jobs reflect the strength of a local economy. Recent research suggests "there simply are not enough jobs paying decent wages for people without college degrees (who make up the majority of the labor force) to escape low-wage work," they wrote.

In other words, even if low-wage workers undergo job training and learn new skills, they're not guaranteed to find good-paying jobs anywhere near where they currently live.

So what makes a good job? Simply put, middle-class wages and benefits like health insurance, according to previous research from Brookings. But only about 30 million Americans have good jobs by that definition — and most of those are held by workers with college degrees, it found.

The reality is that Americans are working but aren't earning enough to gain stable economic footings. As Ross and Bateman noted, "Nearly half of all workers earn wages that are not enough, on their own, to promote economic security."