Since Hispanic women continue to be over-represented in low-wage jobs, policies that lift wages at the bottom will have a significant impact on their wages. A Federal minimum wage increase to $15 would affect nearly one in three Latina workers. 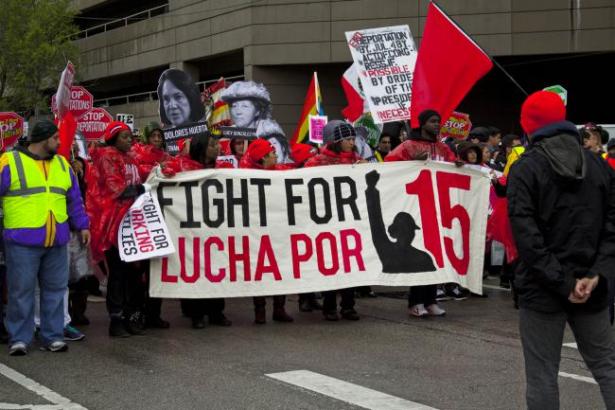 May Day protesters demand the raising of the minimum wage to $15 per hour, Chicago, 2014. , (Charles Miller)

November 20 is Latina Equal Pay Day, the day that marks how long into 2019 a Latina would have to work in order to be paid the same wages her white male counterpart was paid last year. That’s nearly 11 months longer, meaning that Latina workers had to work all of 2018 and then this far—to November 20!—into 2019 to get paid the same as white non-Hispanic men did in 2018. Put another way, a Latina would have to be in the workforce for 57 years to earn what a non-Hispanic white man would earn after 30 years in the workforce. Unfortunately, Hispanic women are subject to a double pay gap—an ethnic pay gap and a gender pay gap. And, this pay gap widened over previous year when it “only” took until November 1 for Hispanic women catch up to non-Hispanic men.

The date November 20 is based on the finding that Hispanic women workers are paid 53 cents on the white non-Hispanic male dollar, using the 2017 March Current Population Survey for median annual earnings for full-time, year-round workers. We get similar results when we look at average hourly wages for all workers (not just full-time workers) using the monthly Current Population Survey Outgoing Rotation Group for 2018—which show Hispanic women workers being paid 56 cents on the white male dollar.

This gap narrows—but not dramatically—when we control for education, years of experience, and location by regression-adjusting the differences between workers. Using this method, we find that, on average, Latina workers are paid only 66 cents on the dollar relative to white non-Hispanic men.

Much of these differences are grounded in the presence of occupational segregation. Latina workers are far more likely to be found in certain low-wage professions than white men are (and less common in high-wage professions). But, even in professions with more Latina workers, they still are paid less on average than their white male colleagues. Figure B shows the average wages of Hispanic women and white non-Hispanic men in the 10 most common occupations for Latinas. In every one of them, white men, on average, are paid more than their Latina counterparts.

Since Hispanic women continue to be over-represented in low-wage jobs, policies that lift wages at the bottom will have a significant impact on their wages. An increase of the federal minimum wage to $15 by 2025 would affect nearly one in three Latina workers.

While some (incorrectly) argue that Latinas are choosing lower-paid professions, further education isn’t a panacea, as shown in Figure A. Regardless of their level of educational attainment or their occupation, Latinas are paid less than their white male counterparts. Additional EPI research on the Hispanic-white wage gap includes analysis of immigrant status and country of origin. Looking at only full-time workers in a regression framework, Marie T. Mora and Alberto Dávila find that Latina workers are paid 67 percent on the white non-Hispanic male dollar (a 33 percent pay penalty). Accounting for immigrant status, the pay penalty improves slightly to 30 percent and is wider among first generation immigrants (39 percent) than second (29 percent) or third or higher generation (31 percent).

No matter how you slice the data, it is clear that there is a lot of work to be done to improve the standard of living for Latinas and their families. More educational attainment and access to better quality education would certainly help to improve the Latinas’ chances to move up the job ladder and get better paid jobs. However, this is not the whole story, since even after controlling for education, the wage gap remains very large. Offering and facilitating access to occupations that are higher paid will also move Latinas up the occupational ladder. Here too, however, we find that even within the same occupations, Latinas fare worse. Lastly, it is important to strengthen workplace protections, like equal pay for equal work provisions, so that those women who do have the same education, the same occupation and are equally qualified in the workplace are not paid less or driven away from moving up to these higher paid positions.

Elise Gould joined EPI in 2003. Her research areas include wages, poverty, inequality, economic mobility and health care. She is a co-author of The State of Working America, 12th Edition.