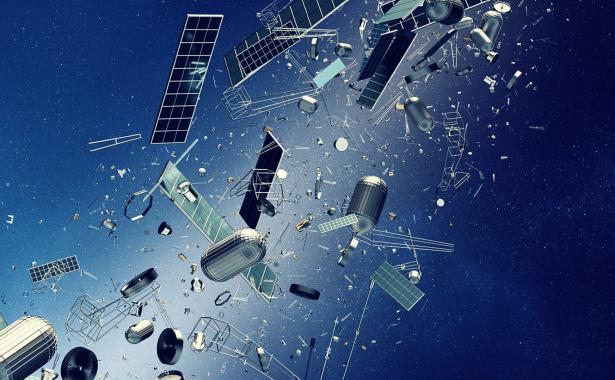 Any war in space would would create massive amounts of space debris that would make it impossible to ever get a rocket off the planet again. , warontherocks.com

Unless grassroots action somehow stops it, it looks likely that the Trump scheme for a Space Force, a sixth branch of United States armed forces, will happen. The U.S. House of Representatives last week passed the $738 billion military policy bill that gives Trump his sought-for Space Force as he moves for what he terms “American dominance in space.”

The vote for what is titled the National Defense Authorization Act (NDAA) for 2020 was 377 to 48. Some 189 Republicans and 188 Democrats voted for it. Six Republican House members voted no, along with 41 Democrats and one independent.

The large Democratic yes vote came as a result of a trade-off for 12 weeks of paid parental leave for civilian federal employees. The New York Times’ article said Jared Kushner, Trump’s son-in-law and advisor, was pivotal. “It was Mr. Kushner who helped broker a deal to create the Space Force, a chief priority of the president’s, in exchange for the paid parental leave, a measure championed by his wife, Ivanka Trump, also a senior advisor to the president,” said The Times.

The U.S. Senate now will consider the measure and pass it considering the Trump-controlled majority in the Senate, and Trump will sign it.

Indeed, last week Trump tweeted: “Wow! All our priorities have made it into the final NDAA: Pay Raises for our Troops, Rebuilding our Military, Paid Parental Leave, Border Security, and Space Force!”

Establishment of a U.S. Space Force would come despite the landmark Outer Space Treaty of 1967, put together by the U.S., then Soviet Union and the U.K., designating space as a global commons to be used for peaceful purposes.

The U.S. move to negate the intent of the Outer Space Treaty will cause Russia and China to respond in kind—especially considering Trump’s declaration that “it is not enough to merely have an American presence in space. We must have American dominance in space.” This will lead to an arms race in space.

The Trump administration and the U.S. military have been claiming that a Space Force is necessary because of Russia and China moving into space militarily but, in fact, Russia and China and U.S. neighbor Canada have been leaders for decades in pushing for an expansion of the Outer Space Treaty. It bans weapons of mass destruction in space. The Prevention of an Arms Race in Outer Space (PAROS) treaty that the three nations have sought to expand would prohibit the placement of any weapons in space.

The U.S.—under both Republican and Democratic presidential administrations—has opposed the PAROS treaty and effectively vetoed its enactment at the United Nations.

The leading organization internationally in opposing the plan for a U.S. Space Force has been the Global Network Against Weapons & Nuclear Power in Space (www.space4peace.org).

“It is not surprise, but still disheartening, to see that 188 Democrats joined with Republicans to pass the NDAA bill in the House.” He noted that “the Democrats were led by Rep. Adam Smith from the Seattle area which means that the aerospace giant Boeing Corp., which stands to make a gold mine off Space Force, clearly pulls Mr. Smith’s chain.”

(Smith, chairman of the House Armed Services Committee, called the bill “the most progressive defense bill we have passed in decades.”)

Gagnon continued: “Another Democrat, Rep. Jim Cooper from Tennessee chimed in saying, ‘Trump’s belated support for a Space Force does not make this a Republican idea.’ Cooper chairs the House Armed Services Strategic Forces Subcommittee and clearly is trying to stake out Democratic Party ‘bragging rights’ on passage of this proposal to move warfare into the heavens.”

Gagnon said, “About three-dozen progressive and anti-war groups worked hard to stop this NDAA and called the Democrats support for it ‘near complete capitulation.’”

“With this newly enshrined Space Force—the NDAA will easily pass in the Senate—Trump will now be poised to tweet that Washington will be able to ‘control and dominate’ space on behalf of corporate interests,” Gagnon stated.

“With technology now nearly in place to allow ‘mining the sky’ for precious minerals on planetary bodies, the Space Force fits in nicely with the long-planned Pentagon ability to control which nations, corporations and wealthy individuals will be able to venture into space and which will not. The idea was spelled out in a 1989 Congressional study called ‘Military Space Forces: The Next 50 Years.’”

“Thus, Space Force would have two primary missions—give the Pentagon full control of the Earth and control the pathway on and off the Earth—both on behalf of corporate interests,” he said.

“These provocative, expensive and destabilizing plans to control space will not be taken lightly by the rest of the world’s space faring nations. Even the Pentagon has lately been predicting the inevitability of war in the heavens.”

Gagnon recounted: “In 1989 at a protest I organized at the Kennedy Space Center in Florida, Apollo astronaut Edgar Mitchell, the sixth man to walk on the moon [who took part in the protest] told the assembled that any war in space would be the one and only. By destroying satellites in space massive amounts of space debris would be created that would cause a cascading effect and even the billion-dollar International Space Station would likely be broken into tiny bits. So much space junk would be created, Mitchell told us, that we’d never be able to get a rocket off the planet again because of the mine field of debris orbiting the Earth at 15,000 mph.”

“That would mean,” said Gagnon, “activity on Earth below would immediately shut down—cell phones, ATM machines, cable TV, traffic lights, weather prediction and more—all hooked up to satellites, would be lost. Modern society would go dark.”

“The aerospace industry has long claimed that Star Wars would be the largest industrial project in the history of our planet,” said Gagnon. “So much money would be needed that the industry has identified the ‘entitlement programs’ for defunding to pay for ‘everything space.’ That means Social Security, Medicare, Medicaid and the remaining tattered social safety net would be cut to pay for Space Force.”

“Everything has an Achilles heel,” said Gagnon. He said that “if you want to help defeat plans for Space Force, fight for social and environmental progress.  Demand that the compromised Congress not fund this disastrous plan to move the arms race into space. It is going to cost all of us dearly.”

A return in many respects to President Reagan’s “Star Wars” scheme of the 1980s, the Space Force notion “started as a joke,” National Public radio reported in August in a report by correspondent Claudia Grisales titled, “With Congressional Blessing, Space Force Is Closer to Launch.”

She related: “Early last year President Trump riffed on an idea he called ‘Space Force’ before a crowd of Marines in San Diego. It drew laughs, but the moment was a breakthrough for a plan that had languished for nearly 20 years.”

She continued: “’I said maybe we need a new force, we’ll call it the Space Force,’ Trump said at Marine Corps Air Station Miramar in March 2018. ‘And I was not really serious. Then I said, ‘What a great idea, maybe we’ll have to do that.’”

The Outer Space Treaty was spurred, as Craig Eisendrath, involved as a U.S. State Department officer in its creation, by the Soviet Union launching the first space satellite, Sputnik, in 1957, as he noted in the 2001 TV documentary that I wrote and narrate, “Star Wars Returns.” Eisendrath said “we sought to de-weaponize space before it got weaponized…to keep war out of space.”

The Reagan “Star Wars” program also used a defense rationale—it was formally called the Strategic Defense Initiative. It was based on orbiting battle platforms with nuclear reactors or “super” plutonium systems on board providing the power for hypervelocity guns, particle beams and laser weapons. Despite its claim of being defensive, it was criticized for being offensive and a major element in what the U.S. military documents then and since have described as “full spectrum dominance” over the Earth below which the U.S. has been seeking by taking the “ultimate high ground” of space.

Among those voting against the NDAA bill last week were Representatives Jerry Nadler, chair of the House Judiciary Committee which has just approved articles of impeachment against Trump; Alexander Ocasio-Cortez; Tulsi Gabbard; and Ro Khanna, who earlier, with Senator Bernard Sanders, issued a joint statement decrying it as a “bill of astonishing moral cowardice.”

Meanwhile, the U.S. military is gearing up for a selling campaign for a Space Force. On a website called “Space War Your World At War” , Barbara Barrett, Air Force secretary, is quoted as saying that the Air Force has come up with a “strategy to find support among not just U.S. lawmakers, but also among the public for Trump’s new branch of the country’s armed forces, the Space Force. She opined that this could clarify to the broader public what the U.S. is doing in this domain and why exactly it needs a separate force for operations in space, as well as funding.

Karl Grossman, professor of journalism at State University of New York/College at Old Westbury, and is the author of the book, The Wrong Stuff: The Space’s Program’s Nuclear Threat to Our Planet. Grossman is an associate of the media watch group Fairness and Accuracy in Reporting (FAIR). He is a contributor to Hopeless: Barack Obama and the Politics of Illusion.