The widespread support and touching memorials for Frank Ordoñez reveal the depth of pain and identification with the working conditions that delivery drivers face across the United States. 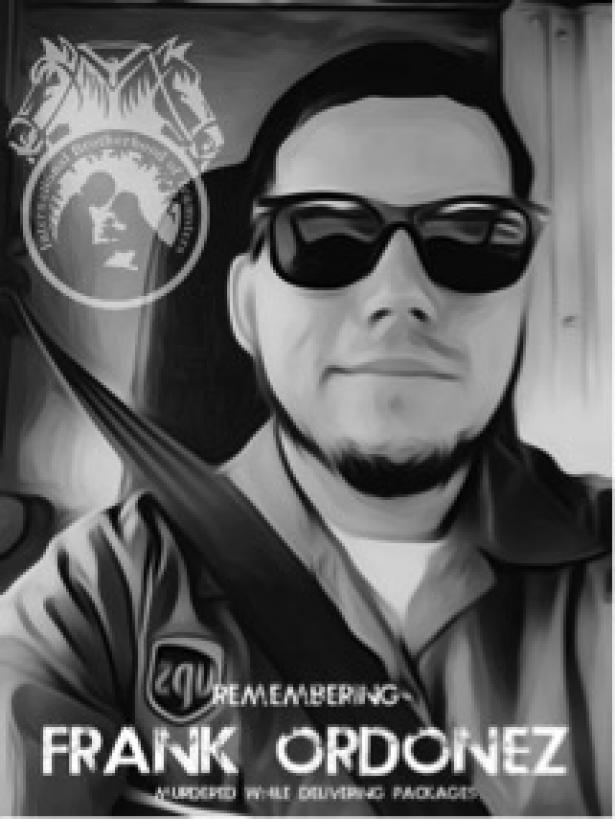 On Thursday, December 5th 2019, Frank Ordoñez, 27, a UPS driver and father of two, was killed in a shootout between police and suspects fleeing the scene of a robbery. Ordoñez was taken hostage while covering for a sick coworker when his delivery vehicle was hijacked. Both suspects, Ordoñez, and a bystander, Rick Cutshaw, 70, a business agent with OPEIU Local 100, were killed in the exchange of gunfire at a busy intersection in Miramar, Florida.

At this time, there is no official determination on whether the bullets that killed Ordonez were fired by the police or hijackers, though witness accounts agree that police fired hundreds of rounds at the vehicle while pedestrians and other vehicles were present; Broward County Police Benevolent Association confirmed that at least 18 police officers fired at the vehicle. Steadman Stahl, president of the South Florida Police Benevolent Association, defended the police action: “If you shoot at us, we are going to engage. We are going to stop the threat.”

Ordoñez’s family have made it clear that they hold the police are responsible for Frank’s death. Genny Merino, Ordoñez’s sister, posted to Twitter: “Today I lost my brother, because of the fucking negligence and stupidity of the police. Instead of negotiating with a hostage situation they just shot everyone.” Ordoñez’s stepfather, Joe Merino added, “It was like the Old West…I bet if the hostage were someone like a Mayor’s son he would be alive today.” Luz Apolinario, Ordoñez’s mother, an Ecuadorian immigrant, stated, “I can’t believe they killed my son. I came to this country for a better life, not for my son to be killed.”

Commenting on the death of their on-duty employee, UPS thanked the police, “We appreciate law enforcement’s service and will cooperate with the authorities as they continue the investigation.” UPS has a close relationship with police departments all around the country; the company employs many off-duty police officers and former FBI agents in their “Loss Prevention” department.

Acts of solidarity from Ordoñez’s coworkers have been powerful. Coworkers and fellow Teamsters from Local 769 covered Frank’s car, still in the UPS lot after his death, with pictures, letters, and flowers in memoriam. Hundreds of Teamsters, package car drivers, and community members later came to pay their respects at the funeral. The family’s GoFundMe to support Frank’s family, pay for his funeral and to hire a lawyer raised more than ten times its goal within days of launching.

Thousands of UPS drivers then self-organized a moment of silence to honor the life of Frank Ordoñez on December 10th at 5pm. They were joined by UPS workers in the UK as well as displays of solidarity from FedEx and other delivering company drivers. Such acts of solidarity are usually reserved for strikes or other job actions. UPS, facing criticism for their initial statement and realizing that they could not prevent it, recognized and broadcast the brief work stoppage. The widespread support and touching memorials for Frank Ordoñez reveal the depth of pain and identification with the working conditions that delivery drivers face across the United States. There are 60,000 UPS package cars on the streets every day in the U.S., an equivalent number for FedEx, a burgeoning number for Amazon, and many more for the venerable USPS.

While many Teamster Locals have issued statements of support and put their efforts into fundraising for Ordoñez’s family, the response from the International Brotherhood of Teamsters has been limited. Teamster General President James P. Hoffa issued a brief comment: “The thoughts and prayers of the 1.4 million members of the Teamsters Union are with Brother Ordonez’s family, friends, colleagues and fellow Local 769 members.” This muted statement mirrors the one produced upon the murder of Philando Castile, also a Teamster in Local 320, who was killed by police in Minneapolis. The Teamsters, like many other unions, represent tens of thousands of police, sheriff’s deputies, court employees, probationary officers, and prison guards throughout the incarceration state, and have a legal defense fund for police officers.

The tragic death of UPS Driver Frank Ordoñez also highlights the risks that delivery workers face daily. While kidnapping and shootouts may be rare, robberies, assaults, threats, sexual harassment and road rage incidents are common. A UPS driver was shot in Ohio in October, and several robberies targeting UPS trucks took place in California in early December. Overall, retail and delivery workers experience the highest rates of on-the-job homicide in the U.S.

These risks are on top of the reality for UPS workers of intense productivity pressure, constant surveillance, disrespect from supervisors and systemic racism. Worker safety at UPS, on the part of management, is reduced to handing out water and bananas during hot weather and blaming workers when injuries do occur. As we mourn Brother Ordoñez it is also a time to ask what UPS management has been doing (or not) to protect drivers from violence when they are out on their routes.

If the past is any indication, few police will be held accountable for the massacre that took place. The only justice for Frank Ordoñez and Rick Cutshaw will be the justice that is won by the family, community and fellow workers. UPS was forced to walk back their initial statement and allow a pause in the working day not only because of the public outrage, but because UPS Teamsters self-organized and did not ask for permission from the company — faced with this mobilization, UPS had to stand aside. The incredible resonance of Frank’s death among package delivery workers sheds light on the desire to fight a feeling of disposability, both at work and on the streets. Workers are looking to their unions for direction on how to defend themselves from employer abuse, speedup, racism and, yes, police violence – if there’s to be any labor revitalization, unions need to offer more than condolences and take up their members’ fights in whichever form they take.

Please contribute to the Ordoñez family GoFundMe and Teamsters Local 769’s fund for Frank Ordoñez’s surviving family; write “For the family of Frank Ordonez” on the check:

Joe Allen is the author of The Package King: A Rank and File History of United Parcel Service, When Fascism was American: Fascism and Antifascism in the 1930s, Vietnam: The (Last) War the U.S. Lost, and “People Wasn’t Made to Burn”: A True Story of Race, Murder, and Justice in Chicago.

Note from the editorial board:

If you’ve read this article to the end, you probably thought it was worth your time.

We hope you’ll also think it’s worth a few bucks (maybe more!) so that New Politics, run entirely by volunteers, can continue to give readers informative, timely analysis that is unswerving in its commitment to struggles for peace, freedom, equality, and justice — what we call socialism.

You have only a few weeks to donate to our annual fund appeal, during which we raise the money to publish. You can also subscribe, if you haven’t already. A digital-only sub is shockingly inexpensive and gets you our print issue weeks before the material is posted.

We won’t send you  a coffee mug, T-shirt, or tote bag.  What you’ll get instead is our thanks and a  deep, fuzzy satisfaction that you’ve contributed to bringing ideas that are more relevant than ever to new readers, helping to change the world.