Rhiana Gunn-Wright, policy director at New Consensus, thinks environmental justice is central to black liberation. She credits black feminism with helping her to draw that connection. 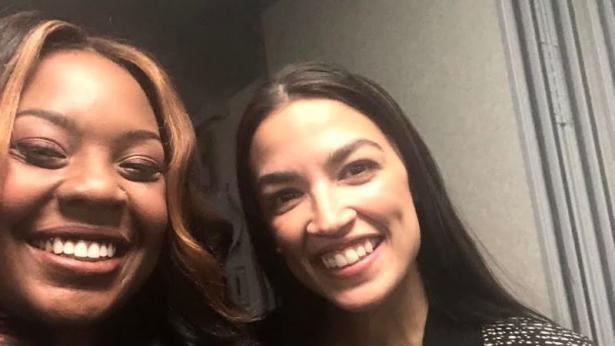 Rhiana Gunn-Wright is constantly figuring out how best to engage black people on environmental justice and crafting policy that empowers them against under-investment and structural racism. As she sees it, environmental justice is central to black liberation. But, as Gunn-Wright explained to me, issues like climate change aren’t explained to people in ways that relate to their experience.

She kept this in mind as a key architect of the Green New Deal, which Congresswoman Alexandria Ocasio-Cortez’s office used to draft H.R. 109. As policy director at New Consensus, Gunn-Wright is charged with ensuring that the black and brown communities that are disproportionately impacted by climate change will reap the benefits of a policy designed to combat it.

When we met up in Washington, D.C., earlier this year, she reflected on her time in Detroit as a policy analyst for the city’s department of health. There, she got a chance to appreciate how urban planning, policy and economics influence how cities with large, underinvested communities are left unprepared for a climate crisis.

“Michigan, like most of the country, is facing higher, heavier rainstorms. So you probably need a new stormwater drainage system,” she told me. “It needs to be prepared, adapted for heavier rains. How will you have enough money with the tax base that you have right now? You won’t, and Detroit’s not a hot spot for climate change. So imagine that happening to a city in Florida when there’s sea-level rise; when you might need to build a sea wall; when you’ll need new stormwater drainage systems because you have hurricanes more often. You might need to be upgrading, solidifying homes for these new instances, for these new dangers. Who’s going to pay for that if you have a shrinking tax base? And that’s the difference between a Green New Deal future and a future without it. Because what people don’t recognize is that yes, the Green New Deal, it’s a comprehensive program, it won’t be free.”

One of the toughest challenges Gunn-Wright is facing as a key architect of the Green New Deal is helping the general public appreciate how dire the climate crisis is, as well as educating marginalized black people that they ought to be the most active voices in supporting environmental policy because they will be the most impacted by manmade changes.

If you’re not familiar with the Green New Deal legislation, it is a policy authored by Ocasio-Cortez that outlines an ambitious 10-year plan to cut carbon emissions from the economy. Broadly, the bill’s aim is “meeting 100 percent of the power demand in the United States through clean, renewable, and zero-emission energy sources.” The ultimate goal is to stop using fossil fuels entirely. The plan focuses on marginalized communities that are impacted by climate change by creating green jobs that boost the economy and move away from industry practices that harm the environment.

It is a non-binding resolution, meaning that it would not become law. Instead, it would signal from the House that the goals should be pursued. Talks of the Green New Deal did not start with AOC and date back to at least 2003. The bill faces strong opposition from both chambers. Voices from the GOP and the Democratic side have dismissed the Green New Deal as impractical or too costly, but Gunn-Wright doesn’t see it that way.

“Our economy, just like our society, is not structured. We don’t have these structures because they’re the most efficient. It’s because they’re efficient in allowing exploitation of particular people to keep power where folks who have power want it,” said Gunn-Wright, who is an honoree of The Root 100 this year. “So the Green New Deal’s about disrupting that.”

You’d think Gunn-Wright has an academic background in STEM and that her strongest influences come from the science community. In fact, she earned two bachelor’s degrees in African-American studies and women’s gender studies from Yale. From there, she attended St. John’s College at Oxford University as a Rhodes Scholar, where she earned her Master of Philosophy in comparative social policy.

She didn’t take to learning about emissions, CO2 levels, coral reefs, and conservation as a kid growing up on the South Side of Chicago. For a while, she felt detached from the subject of climate change and didn’t see a connection with black folks who were suffering in urban communities like hers.

“I just felt like other people are already doing that work,” she told me. “They don’t need me.”

But her thinking changed as she continued with her studies and realized that environmental justice was a key component to liberating black people in the policy space. Gunn-Wright credits black feminism with helping her to draw that connection—especially the work of Dorothy Roberts, Jessica Fulton and Kimberlé Crenshaw.

“All of my power analysis comes from black feminism,” she said. “One of the things I do is often think about not only who the big group the policy is proposed to but what are the subgroups in them and what are the root causes of the problem for them. Because root problems can be different among different sections of the population—even if the final outcome looks the same. So the drivers of the wage gap for women of different ethnicities can be different. But that focus on intersectionality and the idea that the ways that you are located and the intersection of your power, the ways that that’s shaped, the way that you experience the world, and also the ways that institutions impress upon you and control you and shape your life, all come from black feminism.”

For Gunn-Wright, it is impossible to formulate climate change policy without triangulating it with subjects like feminism and critical race theory because our current climate crisis didn’t occur in a vacuum. Economic greed and white supremacy all played a role in the crisis we’re facing, and people of color are the ones who will suffer the most if nothing is done to address its causes, she told me.

“One of the things that I think the Green New Deal does really well, though we get hit for it, is that we’re talking about jobs,” she said. “We’re talking about social safety nets, social structures. We’re talking about power and we get hit for that. But the truth is that most people experience climate change on that level. How many times in your life do you look up and go, ‘This is climate change?’ Very few, especially if you’re a person of color. But what you will feel is when your house floods and you don’t have flood insurance. When you lose your job because you were working in a coal-fire power plant and now it has to be shut down and because you’re moving to renewables. And you will feel it in higher energy bills, these are the ways that you feel it because you have to keep your air on all the time because it’s super hot and you live on a heat island.

“That’s the level that we have to communicate to people on and I think that if not for my background in black feminism and other people’s backgrounds who work on the Green New Deal, we wouldn’t have gotten to this place because we wouldn’t have really understood it, either.”

[Terrell Jermaine Starr is a senior reporter at The Root. He is currently writing a book proposal that analyzes US-Russia relations from a black perspective.]