"Try to Keep Up": How Ocasio-Cortez Upended Politics in Her First Year in Office

Alexandria Ocasio-Cortez, the youngest women ever elected to Congress, did not come to play by the old rules – and she has pushed the party to the left 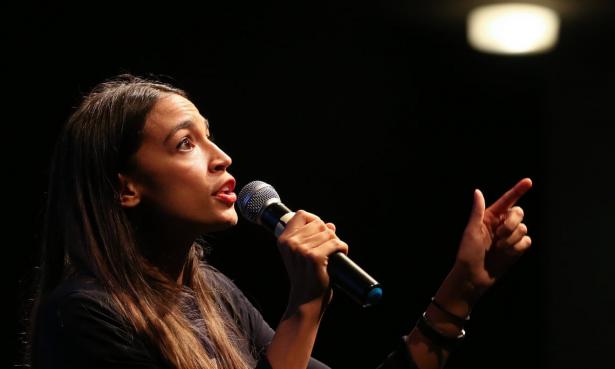 reshman orientation in November 2018 had only just begun when the most high-profile member of the incoming House Democratic class broke away from her new colleagues to join climate activists for a protest – inside House speaker Nancy Pelosi’s office.

Alexandria Ocasio-Cortez, the youngest woman ever elected to Congress, did not come to play by the old rules of Washington. While she hasn’t achieved everything she set out to do – far from it – allies and rivals agree that Ocasio-Cortez has upended Democratic politics, pushing the party inexorably to the left. And all before her 30th birthday, which she celebrated in October.

“Her presence in Congress has been seismic,” said Alexandra Rojas, the executive director of Justice Democrats, a progressive political organization that recruited Ocasio-Cortez to run for office. “She has changed the whole ecosystem and expanded the idea of what’s possible in the minds of voters. That kind of change is on a scale that’s almost immeasurable.”

Few knew her name before the evening of 26 June 2018, when she stunned the political establishment – and herself – by soundly defeating Joe Crowley, a 10-term incumbent and the fourth-ranking Democrat in the House. Now she’s known universally by her initials: AOC.

In the year since her arrival on Capitol Hill, Ocasio-Cortez has convinced every major 2020 presidential candidate to support her Green New Deal, galvanized opposition to a deal with Amazon in New York and turned a tedious congressional hearing on money in politics into must-see TV. Last cycle, she raised more money than any other House Democrat, including Pelosi. And across the country, waves of Democratic insurgents are challenging long-serving incumbents in what has been called the “AOC effect”.

“She’s gotten a lot done by challenging the status quo – by taking on politics as usual in Washington,” said Caroline Fredrickson, the president emerita of the American Constitution Society and author of the upcoming book The AOC Way.

Fredrickson says Ocasio-Cortez has defied long-standing expectations about how young women, and especially women of color, behave in the corridors of power. At the same time she’s surprised critics who once dismissed her as merely a “bright and shiny new object”.

“A lot of people expected a show pony. But it turns out she’s a workhorse,” Fredrickson said, pointing to her skillful questioning of witnesses during congressional hearings.

Ocasio-Cortez doesn’t mind being underestimated. (“That’s how I won my primary,” she quipped on CNN.)

But she said her refusal to accept corporate Pac donations means that unlike many of her colleagues she spends no time on the phone asking donors for money – freeing up her schedule to pore over briefing books, study policy proposals and, on occasion, canvas her followers for questions to ask witnesses at hearings.

But the congresswoman has said the heavy workload and constant scrutiny can take a toll.

“Like many other women + working people, I occasionally suffer from impostor syndrome: those small moments, especially on hard days, where you wonder if the haters are right. But then they do things like this to clear it right up,” she wrote on Twitter, mocking a Republican senator for his bizarre riposte to her climate plan.

Her playful repartee on social media, mixing the personal with the political, has helped her build a loyal following far beyond her New York district, which includes parts of the Bronx and Queens.

Ocasio-Cortez has emerged as a symbol of a Democratic party that is younger, more diverse and increasingly wary of the excesses of capitalism. She believes voters are tired of pragmatism and consensus-building. Her campaign resonated, she argues, because of her uncompromising clarity of vision. It’s a contested theory of change that she shares with the Vermont senator Bernie Sanders, whom she endorsed in October.

“If you’re a one-term Congress member, so what?” Ocasio-Cortez said in a video produced by Justice Democrats earlier this year. “You can make 10 years’ worth of change in one term if you’re not afraid.”

She stridently, and often wittily, counters internet trolls. She made huge waves on a visit to the migrant detention facilities at the US-Mexico border in July 2019, and helped expose appalling conditions for adults, children and even babies there.

A political and cultural icon on the progressive left, she has also transfixed the right: Fox News covers her religiously while Trump and Republicans have eagerly promoted her as the face of the Democratic party. Trump has labeled her a “communist” and a “nightmare for America”. He has also said that she and three other liberal congresswomen of color who form a group that Ocasio-Cortez named “the Squad” – Ayanna Pressley of Massachusetts, Ilhan Omar of Minnesota and Rashida Tlaib of Michigan – should “go back” to their countries. Ocasio-Cortez was born in the Bronx, not far from the Trump family home in Queens. 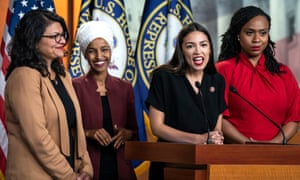 Ocasio-Cortez was raised in a working-class family: her father owned a small business as an architect and her mother, who was born in Puerto Rico, cleaned houses. She studied international relations and economics at Boston University.

When she was a sophomore in 2008 at the height of the financial crisis, her father died of lung cancer and plunged the family into economic hardship. She has said that this ordeal helped shape her views on healthcare and economic reform.

“When you’re from a working class background it often feels like you’re just one disaster away from everything falling apart,” she said in an emotional Instagram story titled You can do it pinned to the top of her feed. “And that’s kind of what happened when my dad died.”

Her lightning-strike rise from bartender to Democratic dragonslayer to member of Congress – all in the span of little more than a year – has not been an entirely smooth transition.

In February, her office botched the rollout of the Green New Deal by distributing an incorrect fact sheet about the proposal that lead to widespread confusion over key details of the plan and lent itself to parody by Republicans. In New York she faced criticism for being slow to open a district office (she now has two). And she stirred fierce backlash when she described migrant detention camps at the border as “concentration camps” – a term she has stood by.

“Nobody expects to go from not having health insurance to being on the front page of every major newspaper, literally overnight,” Rojas said.

Many Democrats have griped privately about her outsized celebrity and combative politics, which they fear imperils vulnerable House members running for re-election in conservative districts where her brand is toxic. In the early days of her tenure, she alienated others in the party by aligning with a movement that runs primary challenges against moderate and right-leaning Democrats. Though she has denied reports that a top target was Hakeem Jeffries, the chairman of the House Democratic Caucus, she has endorsed challengers in two prominent House primaries.

Those tensions exploded in spectacular fashion this summer after the House passed a border-funding bill that enraged progressives. On Twitter, Ocasio-Cortez’s then chief of staff Saikat Chakrabarti unloaded on moderates who voted for the legislation, referring to them as the “New Southern Democrats” and accusing them of enabling “a racist system”. He has since left her office.

Pelosi escalated the row when she told the New York Times columnist Maureen Dowd in an interview that the four members of the Squad had “their public whatever and their Twitter world” but they “didn’t have any following”.

It was not the first time Pelosi has dismissed the left’s influence – she once referred to the Green New Deal as the “green dream” – but this remark drew an unsparing response. Ocasio-Cortez retorted that the ability to shift public sentiment was proof of her power, and later said that Pelosi was “singling out ... newly elected women of color”. This infuriated allies of Pelosi, especially members of the Congressional Black Caucus, who said Ocasio-Cortez had gone too far.

The dispute ultimately ended with a private, one-on-one meeting between Pelosi and Ocasio-Cortez to “clear the air”.

Though deep rifts remain, the bitter infighting has largely subsided in the three months leading up to the House’s impeachment of Trump. In a recent tweet, Trump accused Ocasio-Cortez and the rest of the party of being so obsessed with his impeachment that they have failed to deliver on their legislative agenda.

“In my first 11 months I’ve cosponsored 339 pieces of legislation, authored 15, took on Big Pharma w/ my colleagues in hearings that brought PreP generic a year early & exposed abuse of power,” Ocasio-Cortez shot back.

“In 4 years, you’ve jailed kids & made corruption the cause celebré,” she added. “Try to keep up.”