Why Politics Matters for Amazon Workers

A reborn workers’ movement needs both organized workplace militancy and left-wing politicians that back them. Sunday’s Staten Island Amazon rallies — attended by Bernie Sanders, Alexandria Ocasio-Cortez, and other elected officials — featured both. 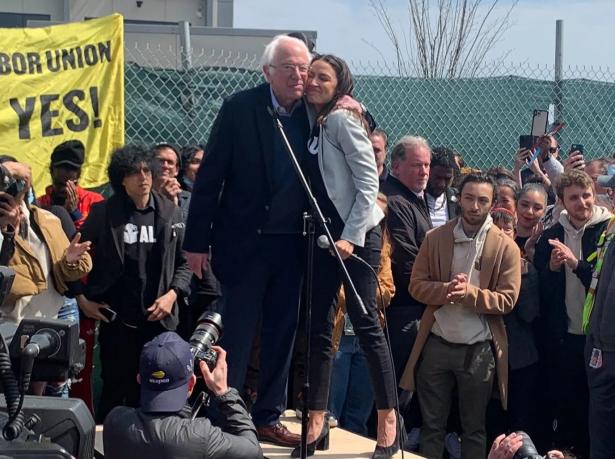 History moves very quickly when workers take action. After two years of unrelenting working-class defeats and demoralization, hope was back in the air in Staten Island on Sunday as Bernie Sanders, Alexandria Ocasio-Cortez (AOC), and a slew of national labor leaders rallied in support of the Amazon Labor Union (ALU).

Less than a month after workers shocked the world by making JKF8 the United States’ first unionized Amazon warehouse, yesterday’s convergence took place in front of the LDJ5 warehouse where workers this week are voting to unionize. The mood was electric, in many ways resembling the October 2019 Queensbridge mass rally in New York City that brought together Bernie, AOC, and tens of thousands of their supporters.

Though smaller in number, this Sunday’s event was perhaps even more significant in content. If Queensbridge reflected the emergence of a fight for anti-billionaire, pro-worker transformation in the electoral arena, Staten Island shows that this movement is finally popping off at workplaces across the country. As ALU president Chris Smalls put it: “The revolution is here.”

Bernie bringing down the house in support of Amazon workers 🔥🔥🔥 pic.twitter.com/S8tA1DV20x

Sanders laid out the national stakes of the ALU’s victory: “You have been an inspiration for millions of workers all across this country — because they have looked at you and they’ve said, ‘These guys in Staten Island, New York stood up to an extraordinarily powerful corporation. If they can do it in Staten Island, we can do it throughout this country.’”

Ocasio-Cortez not only pledged support, but threatened to cut Amazon’s hundreds of millions in subsidies and tax breaks unless they recognize the ALU and stop its illegal union busting: “New York, it’s time to step up for our workers, because we’re going to make sure that they go all the way. . . . New York City is a union town and we’re not going to stop until the United States of America is union made.”

🔥🔥🔥 from @aoc in support of @amazonlabor pic.twitter.com/JCFirt2sgo

Sunday’s rally came as a disappointment to both Fox News and the crankier corners of left media, both of which have been doing their best to stoke a fruitless antagonism between the ALU and Ocasio-Cortez, who last year did not show up to an ALU action, citing a scheduling conflict. It is a testament to the ALU leadership’s serious commitment to building mass power that it pivoted away from such fruitless controversies. Faced with a ruthless, union-busting corporation hell-bent on maintaining authoritarian control of its workplace, the ALU needs all the allies it can get. And because the United States’ broken labor relations system makes winning a first contract even more difficult than winning an initial union vote, its biggest struggles still lie ahead.

The point is not that Amazon workers should start relying on politicians, a dead-end approach that has aided organized labor’s decades-long decline. It took systematic, bottom-up worker-to-worker organizing to make possible the victory at JKF8 — and without deepening and spreading this workplace upsurge, including by getting ready to strike to win a first contract, no forward progress will be possible, even with the most dedicated support from state actors.

But when it comes to workplace militancy and class-struggle politics, ALU is showing that it is possible to walk and chew gum at the same time. As ALU vice president Derrick Palmer told the crowd, “Shout out to Bernie Sanders man, you’re a legend bro, seriously. Shout out to AOC, thank you, thank you. Shout out to the community — we did this shit. Workers, workers did this.”

It is no coincidence that many young worker leaders at Amazon that I’ve spoken to — like at Starbucks and in the Red for Ed educators’ movement — cite the inspiration of Sanders as a significant source of their activism. Labor and political organizing, at their best, are mutually reinforcing. And experience at home and abroad shows that militancy from below is most effective when it receives support from — but does not subordinate itself to — pro-worker elected officials and state actors.

Fortunately, we’ve seen more and more of the latter in recent weeks. In New York, Assemblyman Ron Kim has recently announced that he is introducing legislation to claw back all state subsidies and tax breaks for companies like Amazon that are engaged in illegal union busting.

“If we do not stop subsidizing Amazon’s warehouses,” he underscored, “New York state becomes complicit in subsidizing union-busting practices with taxpayer money.”

Things are moving on a federal level, too. Very much unlike the rest of the administration, Joe Biden’s National Labor Relations Board (NLRB) has dramatically exceeded expectations. By filing injunctions against Starbucks to rehire illegal fired worker leaders and by pushing to overturn key elements of US labor law that allow employers to stall most union drives to death, this is unquestionably the most pro-worker NLRB since the Left was purged from its ranks after 1938.

Elected officials have a key role to play not only in passing pro-worker policies and helping make union organization become the single most important national issue of our period, but directly encouraging their constituents to unionize. As labor organizer Jonah Furman notes, “The main thing politicians and big organizations can do right now to support the Amazon union drive is find ways to identify Amazon workers in their network who might want to organize. The ALU is going to need ‘cover fire’ while the company tries to isolate them on Staten Island.”

Consider the last great US labor upsurge, which won unions for millions in the 1930s. Contrary to simplistic accounts that stress only bottom-up militancy, the most serious histories of this period stress the consistent interaction between shop-floor action and state-level policy. As historian David Brody explains, “Contributions from the political sector probably amounted to a necessary condition for the growth of industrial unionism.”

Without massive, disruptive strikes and risky, militant union drives, labor’s great leap forward would not have been possible. But the emergence and fate of these actions was always inseparable from the raised working-class expectations generated by the New Deal; the Roosevelt government’s 1933 proclamation of labor rights in Section 7(a); the 1935 passage of the pro-union Wagner Act; the refusal by FDR and most Democratic governors to smash strikes through armed repression; the congressional investigations of union busting by the La Follette Committee; and the legal efforts of the left-leaning “Madden Board” NLRB from 1935 through 1938.

Like in the Great Depression, today’s nationwide surge in workplace organizing, from Amazon to Starbucks and beyond, might be a once-in-a-lifetime opportunity to rebuild a powerful, militant labor movement and to reverse decades of one-sided class war against the multiracial working class.

The stakes could hardly be higher. A reinvigorated labor movement is needed not only to give workers a real say at their workplaces, but also to defend democracy and pass the transformative reforms that all working people urgently need. Had such a movement existed in 2016 or 2020, Bernie could have won. Had it existed last year, our side might have had enough power to force Congress to pass a robust Build Back Better. And unless we seize this moment to rebuild workers’ organized power, there’s no reason to expect we’ll ever see a Green New Deal or Medicare for All — let alone a full democratization of this country’s political and economic system.

We’re in an all-hands-on-deck moment for labor and the Left. This means immediately scaling up new workplace organizing efforts and getting strike-ready in all industries — and it means fighting to transform existing unions to play a central role in these efforts. But for these efforts to win, we also need to extend class struggle into the political arena. Sunday’s ALU rally at Staten Island gave us a brilliant glimpse of what this can look like.

“They have the money & the control, but we have the power” —@FlyingWithSara in solidarity with @amazonlabor 🔥🔥🔥 pic.twitter.com/8MIG818Eb0