Trump's Holiday Menu: Handouts for Billionaires, Hunger for the Poor

Republicans defend cuts to food stamps by saying that keeping people hungry will make them work harder. But we know this is just about cruelty 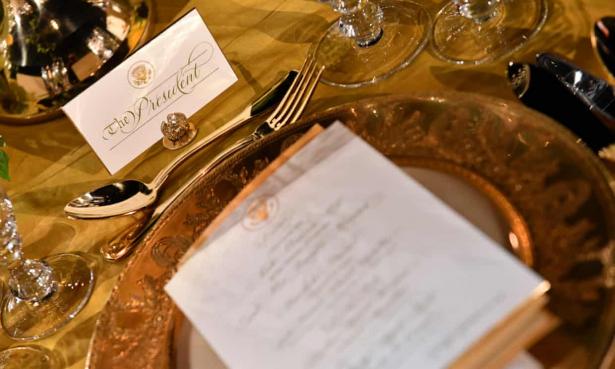 ‘This is what oligarchy looks like: Trump’s appetite to shower the ultra-wealthy with corporate welfare is endless – and so is his willingness to assault the most vulnerable and hungriest families.’ ,Photograph: Mick Tsikas/AAP

When it comes to billionaires benefiting from the generosity of the American taxpayer, the holiday spirit is alive year-round. Taxpayers paid out $115m to Donald Trump so he could play golf at his own resorts.

And Amazon didn’t just pay zero in federal taxes on $11bn in profits – taxpayers gifted the corporation $129,000,000 in rebates. That’s enough to pay for CEO Jeff Bezos’s three apartments in Manhattan, including a penthouse, that cost him $80m.

And what about government generosity for those who actually need help? Tax dollars are somehow much harder to come by when they’re not going to handouts for the rich. The average person in poverty, struggling to put food on the table, gets about $134 a month in nutrition assistance.

Now, just in time for the holidays, Trump has finalized the first of three policies that will make this disparity even more obscene. Two years after passing a $1.5tn tax giveaway to the wealthiest Americans and large corporations, the Trump administration plans to strip 3.7 million people of their nutrition benefits.

The administration’s first step is to kick 700,000 adults off of nutrition assistance as they struggle to find work. The second step: trying to punish families who have high childcare and housing costs. And third, they want to hurt families who already are making difficult choices between food or heat.

Together, the three proposals will cut billions of dollars from one of our nation’s leading anti-poverty programs. Meanwhile, the Republican tax scam is working exactly as planned. Today, the richest 400 billionaires pay lower taxes than any group in America – including the poor. Nearly 100 of the top Fortune 500 companies now pay nothing in taxes.

This is what oligarchy looks like: Trump’s appetite to shower the ultra-wealthy with corporate welfare is endless – and so is his administration’s willingness to assault our nation’s most vulnerable and hungriest families.

Republicans defend this by saying that keeping people hungry will make them work harder. But we know this is just about cruelty. We know that withholding food from needy people who are underemployed only deepens the crisis of poverty in America.

Some states will be hit harder than others. Vermont could see a 30% cut to benefits, and one in five low-income people who rely on nutrition assistance could no longer be eligible to participate. In Michigan, about one in seven would be kicked off food aid, with an estimated 15% cut in benefits. This is absolutely devastating.

It goes without saying that we must fight as hard as we can against the Trump administration’s savage attack on nutrition assistance. But we need to go beyond that. We must demand that the ultra-wealthy finally start paying their fair share so we can dramatically expand nutrition support. In the richest country in the history of the world, we have a moral obligation to eradicate the hunger that more than 37 million of our fellow Americans suffer every day.

We can start by increasing nutrition assistance by $47 per person per month – that is the shortfall between what low-income people need to prepare adequate meals and what they get in benefits. We should also significantly increase the income threshold for this program, so everyone who needs help gets it. We must also guarantee that all schoolchildren get free breakfast and lunch at every public school in America.

And we should also lift the onerous conditions on what people can buy with nutrition assistance. One Vermonter shared how, in the cold winter months, she wished she could buy her children a hot-roasted chicken from the store, because she had no access to an oven. Under the current program, she can only buy the day-old cold roasted chicken. Multiple Michigan families have similar stories to share. These are the kinds of requirements that force poor people to jump through humiliating hoops but they accomplish nothing in the fight to end hunger.

This holiday season, we should work in our communities to make sure our most vulnerable neighbors are taken care of and do not go hungry. But we must also be prepared to mobilize millions of people to defeat the Trump administration’s latest attack on the poor – the same way we came together to block Republicans’ attempt to repeal the Affordable Care Act and kick 32 million Americans off their health insurance.

Defending already inadequate benefits is not enough. Ultimately, we must make a choice as a society: will we tolerate the insatiable greed and cruelty of the billionaire class, whose control over our political system lets them take food out of the mouths of hungry school kids? Or do we build a humane, equitable society that ends poverty, hunger, and homelessness – and allows everyone to live with dignity?

As the new year approaches, let us commit to fighting for a government and an economy that works for the overwhelming majority of the people. That is how we will make food security a human right in America.