labor “The Algorithm Made Us Do It”: How Bosses at Instacart “Mathwash” Labor Exploitation

Instacart is not a marvel of technological innovation. It is a marvel of exploitation. You don’t need an advanced mathematics degree to know the score. 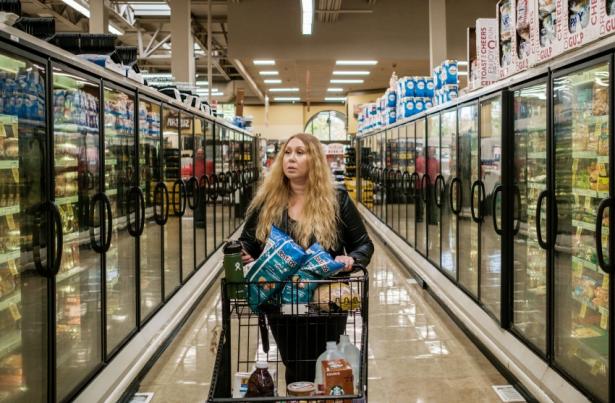 Instacart shopper Vanessa Bain shops for a customer at the Safeway in Menlo Park, California. Bain began a campaign that would lead to a Facebook group of 14,000 Instacart shoppers, about 10% of the nationwide total when the company started using default , (Photo by Nick Otto for the Washington Post)

Instacart is messing with workers’ tips, again. The company’s workers are so fed up hundreds of them are out on strike this week.

Instacart—a gig economy company for same-day grocery delivery—has had problems with tipping date back to 2016. At that time, Instacart removed tipping from the app, before being shamed into reinstating a tipping policy the next month. Then, in 2018, the company altered its policy again by counting customer tips toward workers’ guaranteed $10 base pay—leading to situations where customers were paying almost the full base, with little contribution from Instacart. Now, Instacart is taking aim at the default tip amount. When customers finish their Instacart orders, the app had previously suggested a tip of 10%. This was unilaterally discontinued and replaced by a 5% default.

In response to the default tip change, Instacart worker and organizer Vanessa Bain penned an impassioned Medium post last month which inspired a walkout of more than a thousand workers demanding reinstatement of the 10% default. Instead of improving conditions in the workplace, their collective action was met with discouraging news. Two days after the walk-out, Instacart slashed workers’ “quality” bonus pay—one of the only remaining pay incentives on the app, and an incentive that has been alleged to make up to 40% of the average Instacart workers’ already low income (some estimates put this between 30 and 35%). The company also did not respond to the concerns workers aired in the Medium post.

Amid mounting outrage, Instacart has attempted to deflect criticism by vaguely citing data. “During the last year, we offered a new version of the quality bonus and found that it did not meaningfully improve quality,” the company told shoppers over email in November, after the first walkout. “As a result, we will no longer be offering the quality bonus beginning next week.”

Through this statement, the company blamed unverified, unexplained metrics for the cuts, not its own exploitative model. The metric is presumably based on data, but workers and consumers are never given insight into that data. While the jargon is new, the underlying reality is not: A closer examination reveals this is just a justification for good, old-fashioned exploitation.

By what metric does Instacart measure whether an incentive can “meaningfully improve” quality? For an improvement to be “meaningful,” what quantitative or qualitative factors must be present? Is there a specific “quality” that is being measured, and how does it take into account worker quality of life? Furthermore, how does the company justify the gap between its lowest- and highest-paid employees? The average Instacart executive compensation is $279,596 a year—with the most compensated executive making $790,000. In contrast, the average Instacart worker is making between $9.81 and $12.96 an hour.

By brushing off worker complaints through references to unexplained data that is available to neither workers nor consumers, Instacart is attempting to utilize an insidious rhetorical tactic: “mathwashing.”

Coined by tech-entrepreneur Fred Benenson, the term “mathwashing” can be used to describe attempts to use math terms like “algorithm” to gloss over a more subjective reality. In the case of Instacart, algorithms are being used to justify poor work conditions, since a faceless algorithm is more convenient to blame than the greedy bosses behind the decisions. Benenson is clear in describing why this is a problem.

“This habit goes way back to the early days of computers when they were first entering businesses in the 1960s and 1970s,” he stated, in an interview with Technical.ly Brooklyn. “Everyone hoped the answers they supplied were more true than what humans could come up with, but they eventually realized computers were only as good as their programmers.”

Though Benenson originally used the term to describe how Facebook’s trending topics were not neutral, but instead manipulated by Facebook’s data engineers, it arguably applies to Instacart and a lot of the "don't blame the bosses, blame the algorithm" language that is common across the gig economy. While other companies like Uber and AirBnb have relied on this rhetoric, however, Instacart is a particularly egregious abuser.

Talking with TechCrunch in 2016, CEO Apoorva Mehta relied on jargon and abstract language to defend workers’ low wages. He praised his workers’ “NPS score” and noted that wages were “not a zero-sum game” because “the problem that we’re trying to solve is very hard.”

Instacart’s process for deciding how to delegate orders is described by its website as a “Stochastic Capacitated Vehicle Routing Problem with Time Windows for Multiple Trips.” In describing delivery scenarios, Instacart’s website discusses using “time-based simulations” to replay "the history of customer and shopper behaviors with the existing algorithm and the new one.” The section shows colorful graphs and charts that fail to describe most of their variables, including one that simply lists “metric” instead of even pretending to have a quantity for measuring efficiency. The language is so loaded with jargon and italics that it is likely inaccessible to the average consumer or worker.

While this jargon conveys little, Instacart uses it to market the company’s “genius” design. To help readers understand that they are dealing with a company that is much smarter than themselves, Instacart includes a grocery-inspired illustration of Albert Einstein to accompany explanations of its black-box algorithim. Instead of leaving with a sense of awe, however, readers leave with a sense of having participated in a game of smoke and mirrors. The explanation reads less like a helpful primer and more like a desperate attempt to get consumers to believe anything other than the truth. Namely, that the company is the "despot" in control of its own algorithm.

This is not a marvel of technological innovation. It is a marvel of exploitation. You don’t need an advanced mathematics degree to know the score.

Without contributions from readers like you, none of these stories would be possible. We don't charge for our online content, and we keep our print subscription price low so that the work of our writers and reporters can reach as many readers—and have as big a political impact—as possible.

Reader donations make up a full third of our annual budget, and right now we still need to raise $29,000 before December 31. If you donate today, your gift will be matched dollar-for-dollar by the NewsMatch fund, doubling your impact. Any amount, large or small, will help us reach our goal.

This is our promise to you: We’ll keep publishing as long as you keep supporting In These Times. Please, make a tax-deductible donation today to help keep progressive, independent journalism alive.

Audrey Winn is a Skadden Fellowship Attorney working and writing in New York City. She is passionate about workers' rights, algorithmic transparency, and the inclusion of gig workers in the future of the labor movement.