Coziness with Donald Trump is exacerbating a long-term crisis facing white evangelicalism, some Christians say - it is being abandoned by younger generations 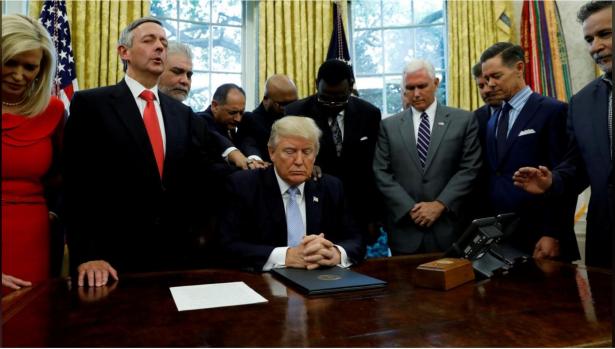 Faith leaders place their hands on the shoulders of U.S. President Donald Trump as he takes part in a prayer for those affected by Hurricane Harvey , REUTERS/Kevin Lamarque

WASHINGTON (Reuters) - After evangelical publication Christianity Today published a blistering editorial on what it called Donald Trump’s “grossly immoral character”, some church leaders and the U.S. president himself denounced the criticism as elitist and out-of-touch.

The Dec. 19 editorial sparked a Christmas holiday debate over religion in U.S. politics, and posed new questions about the close alignment between white evangelical voters and Trump, who has given their beliefs strong political support.

However, the coziness with the Republican president, who was impeached this month by the Democrat-controlled House of Representatives, is exacerbating a long-term crisis facing white evangelicalism, some Christians say - it is being abandoned by younger generations.

There has been a big drop-off in white evangelical church participation among adults under 40, and publications such as Christianity Today and religious leaders are struggling to engage “Gen Z,” or those born after 1996.

“One of the major factors is that the church is too tied up in right-wing politics,” said Greg Carey, a professor at Lancaster Theological Seminary in Pennsylvania. Evangelical activism against gay rights is particularly repellant to many members of a generation where “everyone has friends who are LGBTQ,” Carey said.

Trump’s presidency may make the age gap worse, some evangelical Christians believe. “Having to go out and defend this guy day after day, as many of these Trump evangelicals are doing, they’re just destroying their credibility,” said Napp Nazworth, who until Monday was politics editor of another publication, the Christian Post.

Nazworth resigned over the Christian Post’s plans to criticize Christianity Today for its anti-Trump editorial.

He told Reuters many younger evangelicals opposed Trump’s immigration and asylum policies and were concerned about alleviating poverty, in contrast to older members of the faith. Evangelical leaders standing with Trump “will have no moral authority to speak to moral issues of the day after defending him,” Nazworth said.

Evangelicalism, like all forms of Christianity in the United States, is struggling to attract younger members, amid an unprecedented surge in recent years of the number of people identifying as religiously unaffiliated.

White evangelical protestants declined as a proportion of the U.S. population between 2006 and 2018, falling to 15% from 23%, according to analysis by the Public Religion Research Institute.

Higher-than-average voter turnout among evangelicals means the group still represents more than a quarter of the U.S. electorate, but a failure to draw young worshippers means their electoral heft is set to diminish, said Robert P. Jones, chief executive and founder of PRRI.

The median age of white evangelicals and white Christians overall is 55, according to PRRI data, compared with 44 for the overall white population.

The evangelical church’s “singular focus” on same sex marriage, relationships and abortion is failing to engage younger generations, said Randall Balmer, a professor of religion at Dartmouth College, and a former editor at Christianity Today.

They are motivated by a broader set of issues, he said, adding “in terms of sexual orientation the younger generation just shrugs about that.”

The perhaps unlikely alliance between conservative Christians and the twice-divorced New York real estate developer has been important for Trump in a country that is more religious than most other western democracies and where a president’s spiritual life is closely examined.

White evangelical Christians overwhelmingly voted for Trump in 2016, when exit polls showed he won 81% of their votes. They have mostly stuck with him despite the controversies over his harsh attacks on political rivals and demeaning comments about women, thanks largely to Trump appointing scores of conservative judges who support restrictions on access to abortion.

Many U.S. evangelicals also strongly support conservatives in Israel, and hailed Trump’s decision to recognize Jerusalem as Israel’s capital and move the U.S. embassy there.

Trump, who describes himself as Presbyterian and whose advisors include evangelical figures such as Florida televangelist Paula White, dismissed Christianity Today as “far left”.

A group of nearly 200 leaders from the conservative wing of evangelicalism defended him in a letter to the magazine, praising the president for seeking the advice of “Bible-believing Christians and patriotic Americans”.

Franklin Graham, son of the magazine’s founder Billy Graham, who advised both Republican and Democratic presidents over several decades, said the editorial was a “totally partisan attack.”

Meanwhile, other religious scholars and leaders have signed a petition (here) in support of Christianity Today, stating that the "United States evangelical and Christian community is at a moral crossroads."

Younger evangelicals are put off by church leaders’ seemingly unconditional support for Trump despite his “cruel” treatment of migrants and deregulation that could damage the environment, said Marlena Graves, a Christian author on faith, culture and justice, who signed the petition.

“No political party embodies Jesus’s teaching closely. You can’t depend on government to do what Jesus says because, oftentimes, you have to go against the government,” she said, citing evangelical believers who worked to abolish black slavery and Christians who resisted Nazism in Germany.

The Trump campaign did not respond to a request for comment. It announced on Friday the Jan. 3 launch of “Evangelicals for Trump”, a coalition to support the president in the November 2020 election.

Trump will attend the launch at King Jesus International Ministry, a megachurch in a Miami suburb with a large Spanish-speaking congregation, according to a church official.