According to a new study, grandmother orcas that are no longer breeding support their grandcalves, improving their chances of survival. Researchers found young orcas had a higher chance of staying alive with their grandmothers around than without. 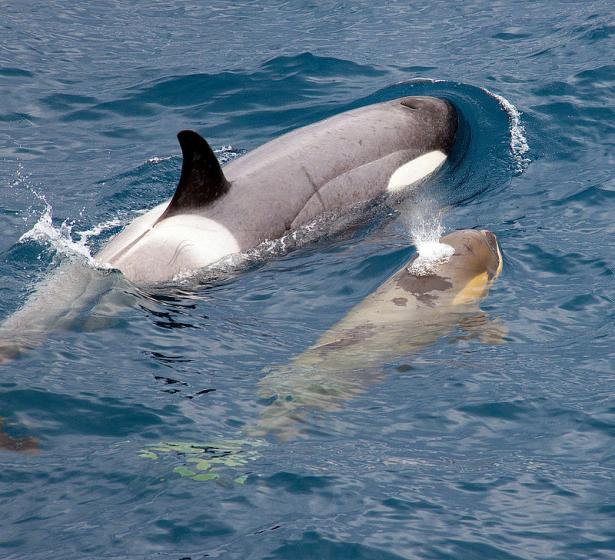 Orca mother with calf. The Southern Resident Orcas, which were studied, make their home in Northern Washington state and Southern British Columbia., Christopher Michel via Flickr (CC BY 2.0).

Most animals die after they’re done reproducing. But a handful of species, including humans and some whales, go through menopause, continuing to live long past their reproductive period.

Female orcas, for instance, stop reproducing in their late 30s and early 40s, but can live for decades. In humans, one popular idea suggests that grandmothers who are past their reproductive age boost the chance of survival of their grandkids. The grandmothers help care for their grandchildren, ensuring their genes get passed on by freeing up the mothers to have more children — referred to as the “grandmother hypothesis.”

A new study tested the idea in orcas (Orcinus orca), or killer whales, for the first time. It turns out, grandmas are critical among orcas too. Grandmother orcas that are no longer breeding help support their grandcalves, improving their chances of survival. In fact, young orcas had a higher chance of staying alive with their grandmothers around than without, the researchers found.

“The menopause has only evolved in humans, killer whales and three other species of toothed whales and understanding why females of these species stop reproduction well before the end of life is a long standing evolutionary puzzle,” Darren Croft, a co-author of the study and a professor at the University of Exeter, U.K., said in a statement. “Our new findings show that just as in humans, grandmothers that have gone through menopause are better able to help their grand offspring and these benefits to the family group can help explain why menopause has evolved in killer whales just as it has in humans.”

To test the grandmother effect in orcas, the researchers studied more than 40 years of census data on two orca groups off the coast of Washington state in the U.S. and British Columbia, Canada, keeping track of each individual’s birth and death. They identified individuals based on their unique fin shapes, and presence of any nicks or scratches, and mothers and grandmothers based on their repeated association with calves and with each other.

Orcas live in large, complex, tight-knit groups led by the eldest female or the matriarch. Both male and female whales usually live with their mothers for their entire lives, venturing away from the group only occasionally to feed and mate. While males live for around 30 years, females have been known live for more than 100 years.

By analyzing the lives of 378 orca grandchildren in the two groups, the researchers found that calves whose maternal grandmother died within the last two years had a mortality rate 4.5 times higher than a calf with a living grandmother. The effect was particularly amplified when salmon populations were low, the authors found, and less so when salmon was abundant.

In previous studies, Croft and his colleagues have shown that senior female orcas lead younger members of their groups to salmon hotspots in the ocean, their preferred food. When a grandmother dies, the group loses its anchor.

“The death of a post-menopausal grandmother can have important repercussions for her family group, and this could prove to be an important consideration when assessing the future of these populations,” Dan Franks, a co-author of the study from the University of York, U.K., said in the statement. “As salmon populations continue to decline, grandmothers are likely to become even more important in these killer whale populations.”

The researchers have also shown previously that by stopping reproduction, menopausal grandmothers avoid reproductive conflict with their daughters. In the latest study, they found that these grandmothers also provide greater support to their grandkids compared to grandmothers who are still reproducing. This, researchers say, suggests that menopause may have evolved in these mammals to help younger orcas survive.

The orca is listed as data deficient on the IUCN Red List (The International Union for Conservation of Nature Red List of Threatened Species). However, researchers generally agree that orca populations are in decline. One population in particular, the Southern Resident killer whales, which the researchers studied, is endangered and at risk of extinction, Nattrass said. The findings of the study help explain some of the factors that drive the whales’ survival and reproductive success, he added.

[Shreya Dasgupta is science and environmental writer based in Bangalore, India. She joined Mongabay as a full time staff writer in 2015. She has written for BBC Earth, New Scientist, Ensia, Smithsonian.com, The Scientist, The Guardian, Nature India, The Caravan, and others.]