Advocates of worker rights in Philadelphia pushed for more funding to enforce some of the most progressive worker laws in the country - resulting in a 400% increase in recovered wages. 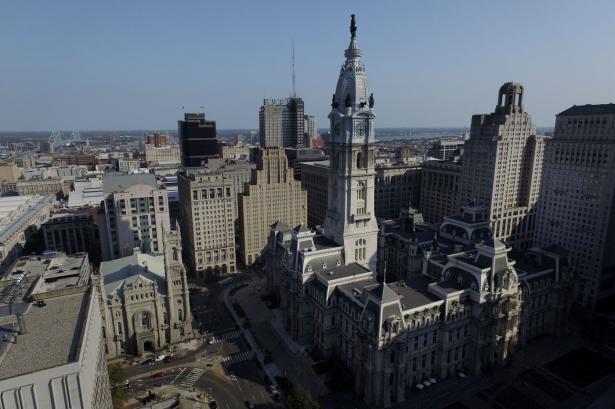 An aerial shot of Philadelphia City Hall on Oct.1, 2019. In a bid to enforce the city's newly minted progressive labor laws, officials are naming and shaming businesses that are not in compliance.,FRANK WIESE / STAFF

Philadelphia’s labor enforcement office, which enforces the city’s growing slate of labor laws, released a report on Wednesday detailing its work in 2019 as well as the names of three employers it defined as bad actors.

The report — and the public shaming of employers — marked a big shift from the office’s relative obscurity and inaction in previous years and a result of increased attention on the office. Advocates lobbied City Hall last year for more funding for the office, pointing to the office’s lack of resources despite the Kenney administration’s and City Council’s increased emphasis on worker protection laws. The result, advocates said, was that the city was passing some of the most progressive worker laws in the country but lacked the ability to enforce them or educate workers about them — essentially rendering the laws toothless.

By the end of January, the office will have doubled in size since 2018, from three to six staffers.

Enforcement is run out of the Mayor’s Office of Labor, which means the office is in a more precarious position than a city department such as Licenses & Inspections or Revenue: If a new mayor comes in and doesn’t prioritize labor laws, the office could be dissolved. But that could change this year. On the urging of the advocates, the city is making moves to make the office permanent.

By the end of January, the office will have doubled in size since 2018, from three to six staffers.

Here’s what stands out from the report.

After investigating complaints, the city issued 15 violations in 2019. Most of the $21,000 came from wage theft investigations but workers were also paid out in back wages from paid sick leave violations. The single biggest wage theft award was $5,800, labor office spokesperson Candace Chewning said.

The total recovery is low compared with that in Seattle, a smaller city than Philadelphia that has a similar office that has been held up as a gold standard for this kind of work. In 2018, Seattle’s Office of Labor Standards was able to get nearly $1.3 million paid back to workers in wage theft investigations alone.

The office recovered an additional $82,000 through the “labor standards” division. That arm of the office enforces such laws as prevailing wage for construction workers on city public works projects. It’s easier for the city to enforce prevailing wage because it can withhold city contracts if contractors don’t comply.

The Mayor's Office of Wage and Benefits Compliance, which enforces Philly's growing slate of labor laws, has ramped up its education and enforcement efforts in the last year.

In 2018, the city received 18 complaints, most of which were alleging wage theft. In 2019, it received 89 — 57 wage theft complaints, 31 paid sick leave complaints, and 1 for wrongful discharge of a parking lot worker. It received more than 300 inquiries.

But it’s a sign that awareness of city labor laws is growing.

Chewning says there’s a ripple effect: When workers get awarded a significant amount, such as more than $1,000, they’ll likely talk about it. The city also announces these awards on the Mayor’s Office of Labor Facebook page, in hopes of raising awareness about the office and labor laws, and will soon have PSAs airing on radio stations.

Awareness has also been growing as certain workers, such as baristas, have been getting educated about their rights to such benefits as paid sick leave.

The city called out ‘bad actors’

Call it enforcement by shaming.

The city’s labor officials have previously said that it can be difficult to complete an investigation because employers sometimes refuse to provide documents or stop responding altogether. The city has the power to take aggressive action such as revoking a business license but has said it doesn’t want to take that route. The list of “bad actors” is a potential solution, Chewning said.

Bad actors, as defined by the city, are employers who have broken city labor law by not cooperating with the city’s investigation, those who have violated city law and have failed to resolve the violation, and employers who have repeatedly broken the law.

In other words, a bad actor is not an employer who has broken city labor law and remedied the situation, such as paying back wages to an employee. An employer will be removed from the list once it remedies the situation.

The city, Chewning said, doesn’t want to punish an employer for not knowing the law. “There are a lot of misconceptions about these laws,” she said, which is why the city has been hosting training for both employers and workers.

But it does want to send a message that if an employer doesn’t cooperate, there will be consequences. Employers are told that their names will be published in a “bad actor” list if they don’t remedy the situation, Chewning said. These employers did not cooperate with the city’s investigation, she said.

It’s a powerful tool, and one that has been proven to work: A 2018 Duke University report found that when the Occupational Safety and Health Administration (OSHA) published news releases about employers found to have violated the law, there were fewer violations at similar employers in a five-kilometer radius.

The Philly list already resulted in one employer coming into compliance, Chewning said. After being contacted by a reporter about the list, an employer came in the next day to pay her violation.

The “bad actor” list is another example of the city experimenting with new techniques for enforcement. In December, for example, Mayor Kenney acquired the power to withhold a water bill discount for nonprofits if the nonprofits didn’t comply with the city’s prevailing wage law.