‘We Are Still Here’: Native Americans Fight to be Counted in US Census 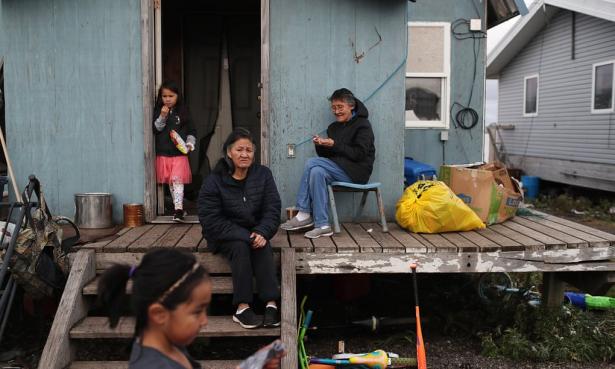 It was the largest rollback of federal lands protections in US history.

When President Donald Trump signed a 2017 executive order that reduced the size of Bears Ears and Grand Staircase–Escalante national monuments by nearly 2m acres, he said the move was supported in the state of Utah and by the local county where the monuments were located.

On the ground, however, that opposition didn’t add up.

The Navajo Nation brought a lawsuit against San Juan accusing the county of racial gerrymandering under the Voting Rights Act of 1965. The tribe won. The county was forced to redraw its election maps and in the fall of 2018, for the first time ever, elected a majority Native commission. The county commission now, officially, supports the protection of Bears Ears.

Today, the Navajo Nation is still fighting for political representation, but with a different tool: the US census, which will take place this year. Without census data that proved the county’s election maps reduced the voting power of Native residents, the tribe would not have been able to win its suit. Today, census data also determines tribal citizens’ representation in Congress, state and county elections, and even the Nation’s own tribal council.

According to the US constitution, all residents living in the United States are to be counted every 10 years. The final census count determines seats in Congress, election maps for local and state representatives and the allocation of over $900bn in annual federal spending for the next decade, including $5.6bn for tribal programs. But despite the sprawling impact of the US census, Native Americans have historically been undercounted.

“It impacts everything,” Charlaine Tso told the Guardian by phone. Tso represents District 9 on the Navajo Nation’s tribal council, the section of the reservation in San Juan county. “[The census] is a domino effect. It impacts education, roads and maintenance, elder care – funding for everything on our reservation.”

In her role as tribal councilor, Tso serves on the Navajo Nation’s Complete Count Commission for the 2020 census. Despite being one of the largest tribes in the US, Navajos, Tso says the committee believes, were significantly undercounted in the 2010 census, which ended up lowering federal funding levels for the tribe. “We know for sure that it was nowhere near accurate. That margin, imagine what difference it makes in federal funding.”

This problem is not unique to the Navajo Nation. An estimated one in seven Native Americans living on tribal lands were not counted in the last US census, according to the bureau’s own audit. Making Native Americans – at 2% of the US population – the group most likely to be missed.

An estimated one in three Native people live in what the Census Bureau considers “hard-to-count” rural census tracts, representing 80% of all tribal lands. In many states with high Native populations – including New Mexico, Arizona, Alaska and South Dakota – over half of Native residents live in such “hard-to-count” areas.

Other factors also disproportionately affect Native Americans, including poverty, housing insecurity, education and even age (42% of Native Americans are under the age of 24).

Desi Rodrigues-Lonebear, a member of the Northern Cheyenne tribe and a demographer who served on the Census Bureau’s national advisory committee from 2013 to 2019, says another big factor is mistrust.

“It’s a hard sale,” she told the Guardian. “You’re trying to convince people, your own relatives even, who for their whole lives wanted nothing else but to be left alone by the feds. And you’re coming to them and saying but we really need you to fill out this form. We really need you to count.”

Many tribal leaders and advocates are worried the undercount could be even worse in 2020. For the first time ever, the census will be conducted mostly online. The move presents a unique challenge in Indian Country, where over a third of Native Americans living on tribal land lack access to broadband, making it the least connected part of the United States.

“It [the census] moving online almost ensures an undercount of Native Americans of historic proportions,” Natalie Landreth, a Chickasaw Nation member and an attorney for the Native American Rights Foundation (Narf), told the Guardian.

Raising further alarm bells for Landreth, the Census Bureau canceled two field tests planned for Indian Country that would have been used to identify problems with messaging and on-the-ground rollout.

Funding for translation into Native languages also narrowed this year. In the past, the bureau has funded translation services into multiple Indigenous languages, but this year is only funding Navajo, according to Narf. “There are census tracts in Alaska where 75% of the households don’t speak English at home,” says Landreth.

Narf has connected tribes in seven states to private dollars for language translation services, but Landreth worries it’s not enough. “We have to do gap filling, which is a risky measure,” she said. “We’re only going to be able to plug the dam in certain locations.”

According to Jessica Imotichey, a Chickasaw Nation member and a coordinator for the LA region of the US Census Bureau, the agency is working to ensure Native Americans are counted in 2020. “[The census] is about representation, not just politically but also visibility,” Imotichey said. “Recognizing Native Americans and Alaskan Natives, that we are still here, that we still remain.”

In remote Alaska, the census will start three months early in January, where workers will travel to Alaskan Native villages to count residents in person. Although only 0.02% of the US population will be counted through this “in person numeration”, the majority of them will be Indigenous.

Still, nationally, funding for census outreach campaigns varies significantly by location. While some states like California are planning to spend $187m on census outreach, 24 states have budgeted nothing. Three of those states – Oklahoma, North Dakota and South Dakota – have significant Native populations.

New Mexico, along with Alaska, was the most undercounted state in 2010, with some counties returning less than 50% of census surveys. According to NM Counts 2020, just a 1% undercount in 2020 could result in the loss of $750m in federal aid to the state. In response, the state has budgeted $3.5mfor outreach efforts.

Tso sits on a Complete Count Commission for the Navajo Nation – an area larger than West Virginia. The commission, one of the many regional committees working within New Mexico, has already met with US senators and regional Census Bureau representatives to discuss the unique challenges of counting their citizens. The tribal government is looking to hire a sizable outreach team this spring, with an emphasis on hiring fluent Navajo speakers, according to Tso.

“We have to do everything possible to count every Navajo,” she says.

[Rebecca Nagle is a writer, activist, podcaster, and member of the Cherokee Nation. She is a recipient of the Sondheim Art Prize and is one of the organizers of FORCE: Upsetting Rape Culture, an activist collaboration that seeks to promote a culture of consent. Her podcast This Land explores how a Supreme Court ruling about an Oklahoma murder could determine the fate of five tribes and nearly half the land in the state.]