labor The Politics of Pensions: No Bailout for You

Federal officials have floated a number of proposals for dealing with the dilemma of underfunded multi-employer pension plans.  Most have one thing in common: they punish the innocent victims. The contrast with the bailout of bankers is striking. 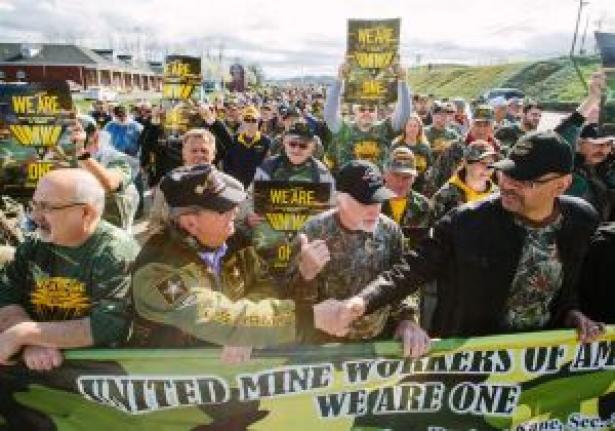 On December 24 last year, the New York Times reported that a multi-billion-dollar bailout of the United Mine Workers Health & Retirement Fund which was slated to go broke in 2023 had been rolled into the $1.4 trillion bi-partisan spending bill passed by Congress and signed by President Trump. The last-minute deal will ensure that thousands of retired miners living in some of the nation’s most impoverished communities continue to receive the modest benefits they earned during their years working in Appalachia’s coal mines.

The decision to insert the Miner’s Pension Protection Act into the must-pass budget bill was clearly good news for the 100,000 retirees who depend on pensions that average $595.00 per month. It was also something of a Christmas miracle.

The legislation had been blocked by Senate Majority Leader Mitch McConnell, Rob Portman of Ohio and other powerful Republicans who opposed the bailout on “principle” even though thousands of retired miners residing in their states would have been devastated if the fund had gone belly-up. Observers speculate that McConnell, who is up for election this year, was scared into a change of heart after Democrat Andy Beshear was elected governor of Kentucky in November. Donald Trump’s need to throw miners a bone after failing to deliver on his promise to resurrect the flagging but “beautiful” coal industry also played a role in moving the proposal along.

Frankly, we could care less about what melted McConnell’s cold, cold heart—assuming he has one. We’re just happy miners and their families will continue to get their checks. But this incident along with the impending collapse of hundreds of other severely underfunded multi-employer (ME) pension funds, provides a frame for comparing the disparate ways leaders of both major political parties deal with Wall Street and Main Street. You won’t be surprised to learn who gets the short end of the stick.

It’s an easy and disheartening comparison to make. Simply contrast the way the federal government reacted when the financial markets began to meltdown in 2007 to what’s been done to address the pension crisis. In the former instance, Bush, Obama, and Congress met behind closed doors and cooked up the Troubled Asset Relief Program, a more than $6 trillion taxpayer bailout of the big banks, speculators, mortgage brokers, and other miscreants whose criminal behavior, greed, and avarice brought the world economy to the brink of disaster and cost 10,000,000 Americans their homes. Of course, no one who engaged in the criminal activity that Fortune’s Michael Collins and others have identified ever went to jail. They just went out and bought new Maseratis, Gulfstream Vs, and bespoke suits.

Now let’s look at how the feds have dealt with the pension crisis which has been precipitated by the effects of deindustrialization, the sharp decline in union membership, chronic underfunding, poor investment decisions, employer pullouts, lax regulation, and serial bankruptcies. Today,  approximately 1,400 multi-employer plans covering 10.6 million Americans are underfunded by $638 billion. More than 100, including the mammoth Teamsters Central State Pension Fund which has $40.5 billion in unfunded liabilities, could go broke in the next five years. Unless something is done millions of men and women who contributed trillions of dollars in deferred wages to ME plans will, through no fault of their own, receive drastically reduced benefits—if they receive any at all.

Federal officials have floated a number of proposals for dealing with the dilemma.  Most have one thing in common: they punish the innocent victims. For example, Congress and the Obama administration launched a sneak attack against workers and retirees by slipping the Multiemployer Pension Reform Act (MPRA) of 2014 into a must-pass omnibus budget bill at the last possible moment. This “reform” legislation gave ME plan trustees the authority to seek approval from the Treasury Department to reduce benefit levels without seeking prior approval from active workers or retirees.

Shortly after the bill passed, the Central States board asked Treasury for permission to slash benefits by as much as $2,000 per month for current and future retirees. The hundreds of thousands of people who would have been affected were understandably outraged by both the proposed cuts and what they viewed as a betrayal by Congressional Democrats and Obama. That outrage and the resentment it fueled persists to this day, even though Treasury and Special Master Ken Feinberg ultimately rejected the Central States’ application in 2016. Since then more than 25 ME plans covering more than 108,000 workers have sought approval to slash benefits.

There is some good news, however. Earlier this year the Democratic majority in the House passed the “Butch Lewis Act,” which would provide billions of dollars in loans to the troubled ME plans. Unfortunately, the good news ends there because the Senate Republicans who leapt at the opportunity to throw trillions to their Wall Street buddies are adamantly opposed to a taxpayer funded bail out that will help working-class retirees and ensure that men and women who are on the job today will receive promised benefits tomorrow.

Their alternative? Chuck Grassley’s Multiemployer Pension Recapitalization and Reform Plan. Not only will this little beauty result in benefit cuts, it imposes a monthly fee on those greedy retirees who had the temerity to live long enough to collect the pensions they earned. This will teach them.

We have some better ideas. First, a TARP-like relief program for America’s pension systems. If we can afford $6,000,000,000 to bailout the robber barons we can afford to ensure that working- and middle-class families get their pension checks every month. And we’ll even do one better than TARP, which did little to rein-in the excesses that nearly blew up banking system. In exchange for the money, we’d require pension plans to accept tight new regulations that would protect workers and their deferred wages going forward.

Second, we need to reform the bankruptcy laws so that ME plans would be considered secured creditors in line for payment ahead of banks, hedge funds, and stockholders. This is critical because serial bankruptcies were largely responsible for undermining the UMW fund.  Requiring companies to meet their obligation to retirees and workers would go a long way to strengthening plans that have been weakened by corporate greed.

Finally, the Democratic candidates for office should start talking about the crisis, making clear how it impacts hundreds of thousands of people in swing states like Michigan, Wisconsin, and Pennsylvania – including many working-class voters who abandoned the Democratic Party in 2016. Hillary Clinton ignored David Betras and Leo Jennings, whose “Blue Collar” memo to her campaign, the Democratic National Committee, and the Ohio Democratic Party offered this advice:

Want to move Ohio’s 50,000 retired Teamsters and their family members to the HRC camp: use them in ads in which they talk about how much they appreciate the fact she will find a way to keep the Central States Pension Fund solvent that doesn’t involve gutting their monthly check and health care benefits…these workers and their family members are scared to death of what may happen and that means they will respond to and vote for the candidate who pledges to fix the problem.

The response from the Clinton campaign: crickets.

The crisis has worsened since then, but so has the opportunity to use it to win working-class votes that could be the difference between victory and defeat in the primary and general elections. We hope it’s not ignored again.

Marc Dann served as Attorney General of the State of Ohio and now leads DannLaw, which specializes in protecting consumers from various forms of predatory financing. Leo Jennings III is a leading Northeast Ohio political consultant and media specialist.