Unions are more popular than ever, but union membership just hit a new low. We need to elect Bernie Sanders, make his “Workplace Democracy Plan” a reality. 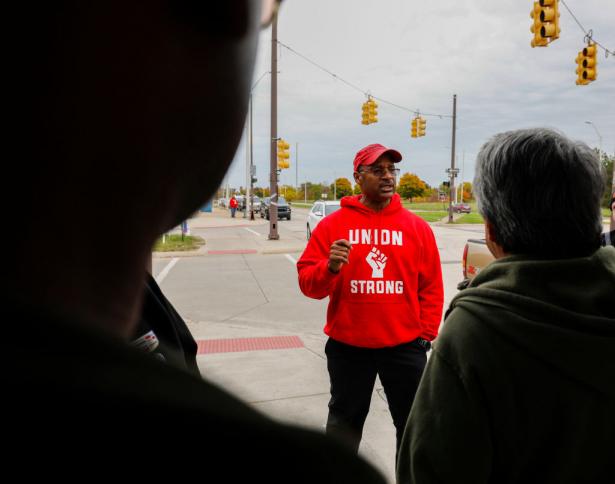 An official from the United Auto Workers (UAW) Local 22 tells striking UAW members that the UAW-General Motors tentative agreement had been ratified pending the official announcement from UAW headquarters at the General Motors Hamtramck plant on October 2, Bill Pugliano / Getty

The Bureau of Labor Statistics (BLS) has just released its 2019 union membership and collective bargaining coverage report. And the news isn’t great. Unfortunately, the uptick in strike action that swept the country in 2018 and 2019 is not translating into a recovery of union organization, at least not yet.

Union density and formal collective bargaining rights aren’t everything. Education workers in particular have used strike action to win big victories in low-density states where public employees lack the right to bargain collectively. But these are some of the clearest indicators of working-class power we have, and their steady decline does not bode well for either popular living standards or the health of political democracy.

With the decade closed, it seems like an apt moment to take stock of the BLS data going back to 2000. Nobody should be shocked that the data paints a portrait of hard times for organized labor in the United States. Since 2000, the overall number of employed wage and salary workers grew by almost 20 million, a 16% increase. As the size of the workforce increased, however, organized labor failed to keep up and indeed lost ground.

From 2000 to 2019 the total number of union members declined by almost 1.8 million, an 11% decrease from its already reduced levels. Since the turn of the century the total percentage of union members in the workforce has dropped from 13.4% to 10.3%.

A closer look at the data reveals a few standout trends that anyone worried about the future of the US labor movement should be concerned about.

Take the category of health care practitioner and technical occupations, for example. The number of union members in this category, which includes registered nurses, rose from 693,000 in 2000 to 1,076,000 in 2019, an impressive increase of 55%. But employment in this field increased even faster, so the union membership rate actually declined from 12.9% to 11.8%. So even in industries and occupations where unions are bringing in new members in meaningful numbers, it’s still difficult for them to keep their heads above water.

This dynamic illustrates how, even in traditionally organized industries like manufacturing, private employers have the power to resist unionization during periods of relatively low unemployment and steady (if unimpressive) economic growth. President Trump’s National Labor Relations Board (NLRB) has only strengthened their hand with a string of pro-employer rulings that reversed many of the positive gains labor made under President Obama’s NLRB. Even so, the relatively labor-friendly NLRBs of Democratic administrations can’t do much to reverse the deeper dynamics, and their most helpful rulings are invariably scrapped whenever a Republican enters the White House.

Public sector unions are holding up, but cracks are appearing: The situation in the public sector is generally less gloomy, but portents of decline can be found here as well. The rate of overall public sector unionization remained quite steady until the Great Recession, but since then a wide-ranging legal and political assault on public sector unions has begun to take its toll. The 2010 Republican sweep of state legislatures put them in a position to rewrite labor laws in a number of traditionally pro-union states such as Wisconsin, where the infamous Act 10 nearly halved public sector union density in a decade. GOP legislators in other states followed Wisconsin’s lead, and in 2018 the Supreme Court issued its anti-union ruling in Janus.

Public sector unions have, on the whole, held up remarkably well in the face of Janus. They have had some help from politicians, but they’ve also been compelled to reengage their members in order to win their voluntary loyalty. Still, it’s clear that some former union members have returned their union cards. Over the last decade total public sector density dropped from 37% to 33.6%, the lowest level since the great wave of public sector unionization in the 1970s. This decline has largely been driven at the federal and local government levels, with the latter seeing a sharp drop from 43.2% in 2011 to 39.4% in 2019. This is the first time local government union membership has fallen below 40% since the beginning of the BLS data series in 1983.

If Trump wins reelection this fall, expect his administration to intensity its attacks on federal employee unions, and perhaps move to privatize the US Postal Service — a union stronghold that is particularly important to the fortunes of black workers in this country.

Deunionization has largely been concentrated among white men: Because workers are not evenly distributed across sectors, industries, and occupations, patterns of unionization can vary widely across gender and race. Union membership and density is down for men and women alike. But the decline is largely concentrated among men, because industries that disproportionately employ them have suffered some of the steepest declines in employment and unionization in recent decades.

Since 2000, the total number of employed men who are union members declined by over 1.7 million, a loss of 18%. This drove union density among men from 15.2% in 2000 down to 10.8% in 2019. And when race is factored into the analysis, it becomes clear that the decline in unionization is concentrated not among men in general, but white men in particular.

This should not be surprising considering white men’s historically higher levels of unionization, but the trend is still striking. There were roughly 1.67 million fewer unionized white men in 2019 than in 2000, while their unionization rate has dropped from 14.8% to 10.9%. This accounts for the vast majority of the decline in unionization among all employed men since the beginning of the century. Indeed, it accounts for the vast majority of the roughly 1.8 million union members that were lost in the United States between 2000 and 2019.

This is certainly not meant to gainsay the difficulties that union members of color or women workers face — the entire movement is under attack. There were 275,000 fewer black men in unions in 2019 than in 2000, and their unionization rate dropped sharply from 19.3% to 11.9%. The assault on public sector unions has deeply affected women workers, particularly women of color, who are disproportionately employed in public service occupations — particularly those in the public schools, who have been pushed past their breaking point by chronic underfunding and institutional racism.

Even so, the extent of deunionization among white men in this century is quite dramatic. Union density among Latinos and Asian-American men, for example, has also declined, but their numbers have increased since 2000. The deep decline in unionization among white men is unmatched in any other segment of the labor force, and it’s a major reason why Trump was able to breach the Democrats’ much-vaunted “Blue Wall” and win the White House in 2016.

Like men, the unionization rate for women has declined (though typically not as sharply) among every age cohort except for one — employed women aged 65 and older, where the total number of union members has more than tripled since 2000. The percentage of unionized women aged 25 to 34 now stands at 8.4%, below every age cohort above them as well as the overall women’s unionization rate of 9.7%.

The aging of the labor movement raises some difficult questions. Will unionized seniors be replaced by unionized workers as they eventually age out of the workforce? Will young workers coming into the labor market, most of whom lack any connection to unions and the labor movement, voluntarily join unions in the public sector or take major risks to organize in the private sector? The aging of the labor movement will continue to quietly sap union density — not to mention the financial solvency of union retirement plans — unless labor manages to bring a significant cohort of younger workers into its ranks.

Unions are extremely concentrated geographically: An often-overlooked fact about the US labor movement is that over half of union members live in just seven states: California, New York, Illinois, Pennsylvania, New Jersey, Ohio, and Washington.

Our labor movement has long been characterized by uneven geographical development, and to some extent this has been a natural result of the patterns of industrial development in this country. But unionism’s historic failure to take root in the South is primarily a reflection of the lingering political power of southern slave owners and landlords. Slavery’s legacy can be found in the model of “low-road capitalism” that took root in the ex-Confederate states and spread to the rest of the country through open-shop laws and attacks on public goods.

In 2019 just two states, Hawaii and New York, had union membership rates above 20%, and the Empire State’s density has slipped to 21% from nearly one-quarter in 2015. By contrast, the number of states with union density below 5% has risen to eight in 2019 from just two in 2000, while an additional nine states are poised between 5% and 7% union density. Altogether, twenty-nine states (and the District of Columbia) have a union membership rate at or below the national average of 10.3%. Twenty-three of these states have open-shop laws on the books.

Labor’s confinement behind a regional cordon sanitaire undermines its ability to push major pro-union reforms at the federal level. It is difficult to imagine meaningful reform legislation getting through a Senate with so many members representing states where unions barely exist.

From Below and Above

This is a forbidding picture, not just for unionists but anyone concerned about the future of the country. The deunionization of the private sector, particularly in the postindustrial hinterlands of the nation’s interior, has generated a disturbing array of social and political pathologies for which there are no easy answers. Life expectancy in the United States is in an alarming decline, driven by “deaths of despair” associated with poverty, inequality, and a dysfunctional health care system. Such desperation is fertile ground not just for the run-of-the-mill cynicism and disillusionment that often pervades working-class life, but the growing appeal of right-populism among the white sections of the postindustrial working class.

The US labor movement has always been far from perfect. But unions have done more than simply raise the standard of living for their own members. They’ve often played a leading role in supporting a wide array of popular struggles and, in many cases, offered white workers in particular an alternative to the individualistic and chauvinist politics of the Right.

For the first time in years, however, the ever-dour BLS report comes at a time of renewed hopefulness. Popular approval of labor unions is at its highest level in fifty years. The hundreds of thousands of workers who have gone on strike in the last two years, many of them in open defiance of their employers and the law, will not forget that experience. Their actions have left a clear mark on the political landscape, particularly in the Democratic presidential primary campaign.

Of all the candidates, only Bernie Sanders has promoted an agenda adequate to the scale of the challenges labor faces today. His “Workplace Democracy Plan” would promote a $15 minimum wage, ban open-shop laws, establish a sectoral bargaining system and industry wage boards, end at-will employment, and require employers to transfer cost savings from the enactment of a Medicare for All plan into wage and benefit increases for union members. The goal is to double union membership in Bernie’s first term, something that would probably do more to change the balance of political power and improve people’s lives than any other single measure.

This is, of course, far easier said than done. Winning it will require a convergence of pressures from below and above: the deepening and extension of grassroots militancy in the workplace, and victory for Sanders and the political revolution at the ballot box.

Chris Maisano is a Jacobin contributing editor and a member of Democratic Socialists of America.

Our new issue, on populism, is out now. Get a discounted $20 print subscription!